JUAN GONZALEZ: The Iowa caucuses are only fourteen days away. In the Republican race, polls show former Arkansas Governor Mike Huckabee has taken a strong lead over Mitt Romney. The latest Washington Post-ABC News Poll found Huckabee has the support of 35% of likely Republican voters. Romney placed second with 27%. Nationally, the latest Zogby poll shows Huckabee is in a virtual tie with former New York Mayor Rudolph Giuliani. A month ago, Huckabee was eighteen points behind.


AMY GOODMAN: Much of Huckabee’s surge can be linked to his growing support from Christian evangelicals. The former Southern Baptist minister has repeatedly discussed his faith at campaign rallies and in television ads.


MIKE HUCKABEE: Faith doesn’t just influence me; it really defines me. I don’t have to wake up every day wondering what do I need to believe.


Let us never sacrifice our principles for anybody’s politics, not now, not ever.


I believe life begins at conception.


I’m Mike Huckabee, and I approve this message.

JUAN GONZALEZ: At a recent campaign event at the late Jerry Falwell’s school, Liberty University, Mike Huckabee credited prayers from his supporters as a main reason why he was surging in the polls.


MIKE HUCKABEE: I like the sound of that. Go ahead.


DANIEL WEBB: Yeah, Freudian slip. Recent polls show you surging in many states, including Iowa, where you’re statistically tied with Mitt Romney, as well as Florida, where you’re second place, and Texas. What do you attribute this surge to?


MIKE HUCKABEE: There’s only one explanation for it, and it’s not a human one. It’s the same power that helped a little boy with two fish and five loaves feed a crowd of 5,000 people. And that’s the only way that our campaign could be doing what it’s doing. And I’m not being facetious, nor am I trying to be trite. There literally are thousands of people across this country who are praying that a little will become much, and it has. And it defies all explanation. It has confounded the pundits. And I am enjoying every minute of their trying to figure it out. And until they look at it from a -— just experience beyond human, they’ll never figure it out. And that’s probably just as well. That’s honestly why it’s happening.


David Corn is the Washington bureau chief of Mother Jones. He’s been closely following the Huckabee campaign, joining us in Washington. Welcome, David. You’ve not only been looking at Huckabee on the campaign trail, but you have been going back in time and looking at his writings as a minister.


DAVID CORN: Yes, I have. And hello, Amy. Well, we did — this all started at our bureau of Mother Jones when we thought, wait a second, this is a guy who’s running campaign ads saying that he’s a Christian leader, so it seems to us fair game then to see what he did as a Christian leader. For twelve years, before he entered Arkansas state politics, he was a Baptist pastor at two different churches in Arkansas. So we said, well, let’s go look at those churches. Let’s look at some of the sermons he gave to get an understanding, a feel, of what he thinks about some issues, theological and public affairs issues, which often enter into sermons. And Jonathan Stein, my colleague, called several of — two of those churches. And one said, “Well, we went through remodeling a few years ago, and we can’t find any of his sermons.” And the other said, “Well, we’re not going to help you.” And then we went to his campaign and said, “Will you provide copies of his sermons?” And the campaign sent back a very brief one-sentence remark saying, “We will not be accommodating such requests.”


Now, if a columnist or a journalist ran for office, it should be fair game to look at what they wrote and said for twelve years of their professional life. And sermons are public matters; they’re not — you know, we’re not talking about what happens within a confessional booth or, you know, private communications. So I thought it was kind of weird. So I started looking at other things, other places where we might find Huckabee talking about his beliefs and ideas and what that might mean if he were to become president.


And it turns out there’s a book he wrote in 1998 called Kids Killing Kids. It was a small book put out maybe even by sort of a vanity publishing house, not a big deal. He wrote it very quickly in the months after the Jonesboro school shooting, which happened in Arkansas in March of 1998. And the book is really very much an attack on American culture, blaming the “demoralization of America” — that’s his phrase — for the violence in schools, such as the school shooting in Jonesboro. And it was very much, you know, a common critique of American culture that you would expect from a fundamentalist Christian.


But throughout the book, there are some pretty hard-edged remarks. For instance, he writes about the things that are fracturing our society, and he says — in a whole list he lumps together AIDS, drug abuse, pornography, homosexual activism and environmentalism. And I would wonder: what does environmentalism have to do with pornography? In another section of the book, he bemoans that, as he calls them, “aberrations” are being publicly endorsed and supported by institutions in America. In the list of aberrations are homosexuality, pedophilia and necrophilia. And again, lumping homosexuality with pedophilia and necrophilia, you know, indicates a certain mindset. But I think throughout the book, too, there is — he, of course, is against sex outside of marriage, against no-fault divorce, but he also pooh-poohs the whole notion of workplace equality for women, sort of indicating that he doesn’t really care too much about it and that it’s not a good idea.


And then, towards the end of the book, he has a passage in which he literally says that if you do not believe in God and you do not walk in faith, well, then you’re prone to do immoral — you’re prone to be immoral, improvident and impure. That’s saying that if you don’t believe in God and you’re not religious, you tend to do evil things or you tend to be immoral and, as he says, engage in destructive behavior.


Now, as I wrote in the piece for Mother Jones, which is on motherjones.com, I say he’s entitled to all these beliefs, and they’re not out of sorts with many Christian fundamentalists, but last week in the final debate before the Republican caucuses in Iowa, he got on the stage, and he literally said that “This is a very divided country; it’s very polarized. And I can unite it, I can bring it together.” The question I would pose to Governor Huckabee is, given that you view homosexuals to be akin to people who practice necrophilia, that you lump together environmentalists with pornographers, and that you say that people who don’t believe in God and don’t walk in faith, you know, tend to be immoral, it seems to me that you’re one of the factors, you’re participating in the division of American society, you’re adding to the divisiveness, which again you’re free to do —-


JUAN GONZALEZ: — about the immigration issue. He’s been hit on that in several debates, on his stand, while governor of Arkansas, on immigration. Some of the contradictions in terms of what he said and what he actually did?


DAVID CORN: Well, yeah. Well, you know, Romney, looking — Mitt Romney, who has, you know, fallen to second place behind Huckabee in the latest polls in Iowa, has been looking for some way to whack Huckabee over the head again and again, and he certainly can’t do it on the social conservative issues, because he’s flip-flopped in those areas, and Huckabee, you know, does seem to have integrity in terms of his stance. But what he’s gone after Huckabee on is this hot-button issue for Republicans of immigration.


And, you know, what he’s — basically, there’s one policy issue. Huckabee, when he was governor, supported the idea of giving college tuition assistance to children who were the children of illegal immigrants — now, not especially for them, he just allowed them to participate in a program that would go to all children in Arkansas, on what is actually kind of the Christian notion that you don’t punish the children for the sins or crimes or actions of their parents.


And Romney is just, you know — keeps hitting him over the head, that he’s — he wants to give away state money, taxpayer money, to children of illegal immigrants! And it, so far, hasn’t worked. You know, for all the attacks that Romney has leveled on Huckabee in ads and on the campaign trail and talking to reporters, Huckabee has continued to grow in strength in Iowa. Maybe — you know, maybe there will be some trailing off at some point in the next week or two.


And then, of course, Huckabee, looking to be not vulnerable in this position, what is he doing? He has now released a plan that basically calls for all people who are here not legally — eleven to twelve million people, as you know, Juan — to go back to where they came from within 120 days, four months. Certainly not a realistic plan and nothing that, you know — but just this is Huckabee’s entry into the demagoguery in the Republican Party on immigration matters.


AMY GOODMAN: David Corn, we’re going to leave it there. We thank you very much for being with us, D.C. bureau chief of Mother Jones magazine. When we come back from break, we turn to another controversy around Mike Huckabee’s past. Stay with us. 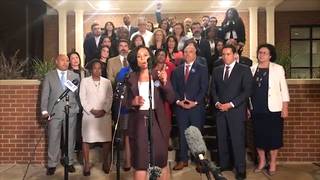 Walk Out: Texas Democrats Block Passage of Voter Suppression Bill by Leaving Capitol Ahead of Vote