Protests have broken out across Latin America as President Bush begins a five-nation tour. In Brazil, over 30,000 people took to the streets of Sao Paulo Thursday with more underway in Uruguay, Colombia, Guatemala and Mexico. We go to Uruguay for a report. [includes rush transcript]

JUAN GONZALEZ: Protests have begun across Latin America as President Bush begins a five-nation tour. In Brazil, over 30,000 people took to the streets of Sao Paulo on Thursday. Demonstrations have already broken out in Colombia, and more protests are scheduled in Uruguay, Guatemala and Mexico.

Today, we’re going to take a look extensively at President Bush’s visit to the region. In a few minutes, we will be joined by a leading member of the opposition in Colombia, but first we go to Montevideo, the capital of Uruguay, where protesters are preparing for President Bush’s visit. Michael Fox joins us on the phone. He’s a journalist based in South America who has reported for Free Speech Radio News, The Nation and ZNet. He’s a former staff writer at venezuelanalysis.com. Welcome to Democracy Now!, Michael.

MICHAEL FOX: Thank you so much.

MICHAEL FOX: Things are pretty calm this morning. You have, essentially — I’m about two blocks away from Independence Plaza, which is where Bush is going to be staying at the Radisson Hotel. You’ve got barricades up surrounding the plaza, which are — you know, you have free access to head in and out of the region, but within the next couple of hours, they say, they should be closing things off for about a 10-block radius for anyone who doesn’t live in the region.

JUAN GONZALEZ: And how has the new government, a relatively progressive government, been handling the buildup of the protest and obviously the need to sit down and negotiate with President Bush?

MICHAEL FOX: That’s a good question. Frente Amplio, which is the coalition of leftist forces, which is in government power here since 2004, it’s a complicated issue, because you’ve got some sectors such as Marina Arismendi, which is the minister of development and the Communist Party leader, who said that Bush represents essentially the murder and the militarists in the world. And you have others, such as the minister of economy, Danilo Astori, who is ready to sign a free trade agreement with the United States. So it’s a complicated issue. Frente has decided that they’re not going to support or call for any of their supporters to head out in the marches, but they’re also not going to ask them not to go. So you have some leaders of Frente, such as Senator Enrique Rubio, who are going to be in the marches tonight.

AMY GOODMAN: Michael Fox, what sense do you have in Uruguay, how much coverage is there of the protests across Latin America, and also what Hugo Chavez is doing, the Venezuelan president, going to Argentina to lead an anti-Bush rally?

MICHAEL FOX: You know, there’s coverage. There’s not a whole lot of coverage, but, I mean, obviously everybody is focused on Bush’s visit, and everybody realizes that there’s going to be protests arriving. Also, obviously, the fact that Venezuelan President Hugo Chavez is just across the Rio de la Plata and is going to be speaking before 40,000 people tomorrow, at the same time as Uruguayan President Tabare Vasquez is meeting with Bush, it means a lot. And most people in Uruguay are very aware about, you know, the present situation in Bush’s trip across Latin America.

JUAN GONZALEZ: Also, while there are many progressive governments now in the region, there are also contradictions among them. Uruguay has some contradictions with Brazil and Argentina, doesn’t it? Could you talk about that a little bit?

MICHAEL FOX: It’s got huge contradictions. Uruguay is, you know, a country of approximately 3.6 million people, which compares to Brazil’s 300 million — is tiny. They’re right now trying to push — you know, to find some sort of comparative advantage in the region. At the same time, you’ve got — although they make up Mercosur, which is made up of Paraguay, Uruguay, Brazil, Argentina and Venezuela, it’s a difficult situation, because it’s a tiny country trying to fight for some sort of market. And right now, you know, one of the things they’re going to be talking with Bush, you know, is that access. Right now, U.S. is Uruguay’s number one trading partner, directly after the Mercosur countries. So some folks in Frente, including Uruguay’s President Tabare Vasquez, are looking to open up those doors to U.S. free trade. Of course, what that would mean for Mercosur, which is, you know, this economic trading bloc in South America, it’s difficult to say.

AMY GOODMAN: Michael Fox, I want to thank you very much for being with us, freelance journalist based in Uruguay, reported extensively from Venezuela for venezuelanalysis.com, Free Speech Radio News, and The Nation and ZNet. 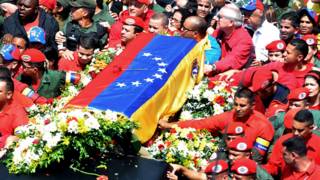 Hugo Chávez Funeral: Derided by US Media, Venezuelan Leader Uplifted Poor from Caracas to the Bronx