A new phase has opened in a case that highlights a major gap in how the U.S. and many others view international terrorism. Luis Posada Carriles walked out of a New Mexico jail last week, free on bail. Posada was being held on immigration charges, but many want to see him tried for terrorism in connection with the 1976 bombing of a Cuban airliner that killed 73 people. [includes rush transcript]

StoryJun 11, 2012Will the Real Terrorist Please Stand Up: Saul Landau on U.S.-Aided Anti-Castro Militants & the Cuban 5

AMY GOODMAN: A new phase has opened in a case that highlights a major gap in how the U.S. and many others view international terrorism. Luis Posada Carriles walked out of a New Mexico jail last week, free on bail. Posada was being held on immigration charges, but many say he should be tried for terrorism. Posada is the anti-Castro Cuban militant who was connected to the 1976 bombing of a Cuban airliner that resulted in the deaths of all 73 people on board. Posada Carriles is a former CIA operative who has worked for years to bring down the Cuban government. He has been detained in the U.S. on immigration charges since he snuck into the United States in 2005. The U.S. has refused to extradite him to Cuba or Venezuela.

On Sunday, the Venezuelan President Hugo Chavez accused the U.S. of protecting international terrorism and said that Posada Carriles, that his case should be taken to the United Nations. Cuba has also renewed calls for Posada’s extradition. This is Cuban National Assembly President Ricardo Alarcon.

RICARDO ALARCON: [translated] According to international law, according to antiterrorism agreements, when there is an attack on a civil plane, the country that has a suspect in its custody and is asked for him to be extradited to another place so that he can be investigated and tried, that country that has him has only two options: to extradite him or, without exception, to try him itself. Posada is not a suspect. Posada was being tried, formally accused over 20 years ago by another Venezuelan government, by other Venezuelan courts that have been demanding him ever since then.

AMY GOODMAN: Posada is now in Miami, ahead of his immigration trial next month. Last week, Posada’s attorney, Luis Fernandez, argued Posada’s past is irrelevant to his status today.

LUIS FERNANDEZ: This decision by the appellate court to uphold Judge Cardone’s brilliant decision was very important, because the government was banking on using tactics of things that happened or alleged things that happened over 30 years ago to dissuade a judge from giving a defendant his right to go out and be out on bond while he’s pending trial.

AMY GOODMAN: We go now to Venezuela, where we’re joined by Jose Pertierra. He’s the Washington, D.C.-based attorney who has been retained by the Venezuelan government to represent the country of Venezuela in the Luis Posada Carriles case here in the United States. We welcome you to Democracy Now!, Jose Pertierra.

JOSE PERTIERRA: Good morning, Amy. It’s a pleasure to be with you.

AMY GOODMAN: Well, can you talk about the significance of this development of Posada being released from jail?

JOSE PERTIERRA: Amy, I don’t think there’s any doubt that Luis Posada Carriles is a terrorist and has been a terrorist for years and that he was the mastermind behind the downing of the plane in 1976 that killed those 73 innocent people.

What we’re seeing now, though, by his release from prison is the conduct of the United States throughout this case, that rather than obey the law and abide by its international treaty obligations and by U.S. law, the United States is neither extraditing him nor prosecuting him for murder, but is instead trying to hide behind judicial decisions that the Bush administration has almost invited by its conduct. Let me just briefly tell you what I mean. We contend that the White House has manipulated the U.S. judicial system in such a way as to get exactly the kind of decision that it wanted in the immigration case and also the case that’s presently pending in El Paso. Rather than charge him for murder, the U.S. has charged him only with lying on an immigration form.

The U.S. has refused to present any witnesses, any evidence, any documents, despite a wealth of documents that we have submitted and that exist in CIA files. They’ve failed to cross-examine any witnesses. It’s a manipulation of the judicial system that has delegitimized the U.S. judicial system. You know, we see the scandal that’s occurring now with the firings of prosecutors who wanted to implement the law and abide by their conscience. This is a case where prosecutors didn’t obey their conscience; they obeyed the White House. And in so doing, they have released this international terrorist into the streets of Miami.

AMY GOODMAN: Jose Pertierra, can you outline the evidence that there is that he was connected to the 1976 Cuban airliner bombing that killed all 73 people on board?

JOSE PERTIERRA: Well, Amy, there were four people directly involved: two people who actually placed the two bombs on the plane, Hernan Ricardo and Freddy Lugo; and two masterminds, Mr. Posada Carriles and Orlando Bosch. Both Bosch and Posada are free in Miami, one pardoned by Bush, father, the other one freed by Bush Jr. The two people who placed the bombs, Hernan Ricardo and Freddy Lugo, were convicted in Caracas to 20 years in jail, and they’ve served their time and have now been released. Both of those men confessed to the authorities in Trinidad, where they were captured, and their confessions are even — some of them are even in handwritten form — that they received training in explosives from the CIA, that they worked for the Venezuelan Secret Intelligence Agency at the time, and that Luis Posada Carriles was their boss who directed them. We have their confessions. We have telephone calls that were placed by these men to Mr. Posada Carriles in Caracas. Although they didn’t reach him, they left a message in coded words saying that the bus had crashed and the dogs had died, referring to the plane and the passengers. These were coded words that were used.

We also have a wealth of CIA and FBI declassified documents that show that Posada Carriles even bragged about the downing of the plane before it happened. Posada himself talked to CIA sources in Caracas and said that a Cuban plane — that we’re going to down a Cuban plane and that Orlando Bosch, his accomplice, has all the details. Those documents can be found on the George Washington University’s National Security Archive website for all to see.

This is a man who was indicted in Caracas for 73 counts of murder in relation to the downing of the plane. While the case was pending and before judgment could be reached, he escaped from prison in 1985 and has been an international fugitive since. The case in Venezuela could not proceed when he escaped, because under Venezuelan law, if you escape, the process stops. There’s no in absentia verdicts under Venezuelan law. So the warrant was issued, and now what Venezuela is asking is that the White House abide by its treaty obligations to Venezuela and return him to finish his trial here.

AMY GOODMAN: You’re in Venezuela now. You represent the Venezuelan government in this case. The U.S. said that they wouldn’t extradite Carriles to Venezuela because they were concerned he would be tortured there. Your response?

JOSE PERTIERRA: I’m glad you raise that, Amy, because there has been a great deal of confusion about this, and I think on purpose. The White House wanted to confuse all the legal issues surrounding this case. What we have is an immigration judge who decided that Posada could not be removed or deported under immigration laws to Venezuela. However, under U.S. law, extradition trumps immigration rulings. That is to say, he can be extradited despite this decision by an immigration judge that he should not be deported.

And the lead case on that is the precedent-setting case from 1963 by the U.S. Board of Immigration Appeals, ironically enough dealing with a Venezuelan, a Venezuelan dictator by the name of Peres Jimenez, who had come to the United States and sought asylum and he was wanted in Venezuela for corruption. The Board of Immigration Appeals held that deportation proceedings should be suspended and the extradition process should proceed, because extradition trumps immigration.

And secondly, Amy, the law is very clear that if the United States for political reasons decides not to extradite an individual, it is obligated under international treaty conventions that deal with terrorism to prosecute that individual for the crimes committed abroad, but to prosecute him in the United States. And the language of those conventions are very clear. It says, “shall, without exception whatsoever, prosecute the individual in the territory where he is found.” So there is no wiggle room there. The law says you extradite or prosecute, but you don’t free him into the streets of Miami and charge him only with merely lying on an immigration form to an immigration official. 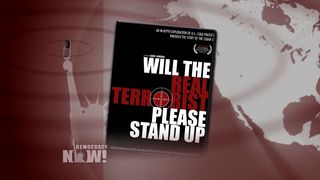