10 Years in Prison for Consensual Sex: Genarlow Wilson’s Mother Speaks Out on Why Her Son Remains Locked Up

Genarlow Wilson, a 21-year-old African American, is serving a 10-year prison sentence for having consensual oral sex when he was a teenager. He was 17 years old, and the girl was 15 years old, when the sexual encounter took place. Wilson was convicted of felony aggravated child molestation. He has already spent more than two years behind bars. [includes rush transcript]

AMY GOODMAN: We turn to another Georgia prison case that’s attracting national attention. Genarlow Wilson, now 21 years old, African American, he’s serving a 10-year prison sentence for having consensual oral sex when he was a teenager. He was 17 years old at the time. The girl was 15 years old when the sexual encounter took place. Wilson was convicted of felony aggravated child molestation. He has already spent more than two years behind bars.

In a ruling last month, the Georgia judge criticized prosecutors and ordered Genarlow Wilson’s release. But the state attorney general, Thurbert Baker, appealed the decision, saying the judge overstepped his bounds. On Friday the case goes before Georgia Supreme Court.

Prosecutors have been accused of an overzealous campaign to keep Genarlow Wilson behind bars. While the appeal took many by surprise, no one could have expected the bizarre action from the district attorney last week. David McDade publicly released some 35 copies of video allegedly showing the teens’ sexual encounter. Georgia’s chief federal prosecutor, David Nahmias, said the video constitutes child pornography and called on McDade to stop releasing copies. Nahmias did not rule out bringing criminal charges against McDade himself. In addition to releasing the tapes, McDade did not obscure the faces of the females to obscure their identity and did not try to keep the material under seal.

Today I am joined now from Atlanta by Genarlow Wilson’s mother, Juanessa Bennett. She has led the campaign for her son’s release. We welcome you to Democracy Now!

JUANESSA BENNETT: Thank you. Thank you for having me.

AMY GOODMAN: Can you tell us what happened? How was it that your son, at the age of 17, who engaged in consensual oral sex with a 15-year-old — the 15-year-old’s mother reiterated in the last few weeks that her daughter had engaged in a consensual sexual encounter — how he ended up in jail?

JUANESSA BENNETT: She admitted from the beginning that it was consensual. I don’t know really how the prosecutors came to the conclusion that there should be charges. According to a law that was in effect back then, the girl was not old enough to consent to any form of sexual behavior. The law has then been changed, where it would be a misdemeanor, not more than 12 months’ jail time for this type of action. But it was a law that was in effect at the time.

When I came forward, I thought the prosecutor would use his discretion to try not to make this into as big as it has become. We never imagined it would be this big. But just like I said, the law was changed in '06, and it is now a misdemeanor. And that's the reason why we’re still fighting, because we just can’t understand how you can land 10 years’ prison time for something which is, you know, quite as simple as this.

AMY GOODMAN: Barack Obama, the Illinois senator, presidential candidate, said at the NAACP forum, “We know we have more work to do when Scooter Libby gets no prison time, and a 21-year-old honor student who hadn’t even committed a felony gets 10 years in prison.” Tell us about your son Genarlow. He’s now been behind bars for, what, close to two-and-a-half years. Tell us about him.

JUANESSA BENNETT: He’s been in now for 29 months exactly in prison, in the prison system. He definitely doesn’t deserve it. He’s quite matured a whole lot since then. His outlook on life is definitely different than, you know, the teenager that first went in. He has high hopes and high goals now. I’m not even quite sure if his athletic ability is, you know, at the far — you know, it’s not quite as important to him as it is now to try to help other youths to overcome some of the tragedies that they are going through, because there’s so many other people who are out there who, even at the rally on Saturday, was several people who walked up to me, and I’m not quite sure what I can do, but was just begging for help, you know, in certain situations that they felt like they shouldn’t have been in.

AMY GOODMAN: He was an honor student?

JUANESSA BENNETT: He was a B+ student. He had a 3.2 grade average. He was first-ever homecoming king for Douglas County. He was prom prince. He was all-conference in football and track for more than two years. He had received several letters for certain colleges, mostly Ivy League schools that were interested in him coming to go to school with them in the fall.

AMY GOODMAN: Does he have any chance of going to college now?

JUANESSA BENNETT: I think he does. I think there’s always a chance, you know. Once he gets out, I think there’s always a chance that he can go. Not with a felony conviction, no, he wouldn’t be able to obtain the education that he, you know, deserves to have. But I think there’s a good chance that he’ll be able to go back in. He’s way behind. You know, he’ll have to do a lot of catching up, maybe a whole lot of summer school. But I think he still has a chance. And now, his major has — mostly he was focused was to medical field before. Now it’s sociology, you know, in fields like that or political economics or something.

AMY GOODMAN: His lawyer pleaded at the news conference that was held when the judge ordered his release for the Georgia attorney general not to appeal the case. The attorney general did, so it’s going to be in Georgia Supreme Court on Friday. What do you expect from this?

JUANESSA BENNETT: I think the Supreme Court at this point will be fair, just as fair as the habeas judge, Judge Wilson. I was really shocked at Thurbert Baker’s request for an appeal. Way shocked. Actually, I didn’t take it very well at all, because he has children and he knows what children engage in. And I was just more shocked at the moral standards for this to come through, because as it was said before, McDade passed out tapes to try to keep Genarlow incriminated. I really don’t even understand. It seemed like it’s a personal vendetta, as far as him trying to keep him locked up. Several people have came publicly and said no one was hurt behind it. And now that the young lady’s family is speaking out, saying how, you know, they never wanted this to happen, I really couldn’t understand Thurbert Baker’s reasoning behind filing an appeal.

But it’s just led to other reactions, and so many people coming for it now who is questioning their abilities, you know. We’ve never said that we condoned this type of behavior. My son was definitely — you know, made bad judgments of character. He definitely was not in his right state of mind. I don’t condone the drinking or the hanging at the — aspect. But it was definitely not nothing that deserved 10 years, maybe some kind of rehabilitation or something to teach a lesson, but nothing extreme like this.

AMY GOODMAN: Juanessa Bennett, we only have a few seconds left, but how has this affected you, Genarlow’s mother?

JUANESSA BENNETT: It’s been very, very rough. Constant headaches. Constant worrying. Sometimes, you know, I don’t know when I’m coming or going. My reactions have been mixed. It’s been up and down, up and down. A whole lot of disappointments. But basically I try to keep my head up and try to keep him going to let him know that, you know, there will be a better day.

AMY GOODMAN: Does he believe he’ll be out of prison soon?

JUANESSA BENNETT: He always keeps faith. I always try to keep him encouraged that, you know, some kind of way the system will prevail and that the unjust will become just.

AMY GOODMAN: Juanessa Bennett, I want to thank you very much for being with us, joining from us Atlanta. And we will certainly follow this case. Genarlow Wilson’s mother. 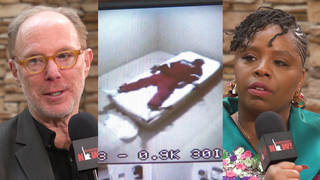