Meanwhile, the Texas Board of Pardons and Paroles meets today to decide Kenneth Foster’s fate.

Foster is one of three death row prisoners set to die this week in Texas. Last night, the state executed DaRoyce Mosley. Tonight, John Joe Amador is scheduled to be killed. All three men are African American or Latino.

What makes Foster’s case unique is that he’s set to be executed for a murder that the state of Texas admits he didn’t commit or plan.

AMY GOODMAN: Eleven years ago, Kenneth Foster was driving a car with three passengers. One of the passengers left the car, got into an altercation and shot a man dead. The shooter was executed for this crime last year. At the time of the shooting Kenneth Foster was 80 feet away in the car.

But Foster was sentenced to die, as well, under what’s known as the Law of Parties. The law imposes the death penalty on anyone involved in a crime where a murder occurred.

To talk more about the case, Liliana Segura joins us here in New York. She is an activist with the Campaign to End the Death Penalty and a freelance writer published in The Nation magazine and Alternet. Welcome to Democracy Now!

In these few minutes, what is the state of Kenneth Foster’s case right now, scheduled to die tomorrow night?

LILIANA SEGURA: Basically, as you mentioned, the Board of Pardons and Paroles makes its recommendation today, I believe at 1:00 p.m., to Governor Rick Perry. And actually that recommendation was supposed to be made yesterday, but they postponed it, following a meeting with Kenneth’s father, his grandfather and his lawyer. So that’s very unusual, and we’re taking that to be a very good sign.

You know, almost all of the Texas papers have run editorials calling for clemency, basically, and saying this is sort of an outrage. And Rick Perry, I believe, is under, you know, quite a bit of public pressure. So even though the odds are against us when it comes to the board decision, because they’ve only ever recommended clemency twice, and Rick Perry has never granted clemency, in this case, you know, there’s quite a bit of public scrutiny. And also with these very high-profile people — you know, Jimmy Carter, Desmond Tutu — that’s hugely significant.

And then, as you mentioned, also this cert petition filed by Keith Hampton, Kenneth’s lawyer, before the Supreme Court basically asks them to sort of reexamine the multiple sort of series of decisions by the lower courts that were mishandled, basically, and sort of pull rank and restore their original jurisdiction in the case, which actually the Supreme Court has done in a couple of cases in this past year. Just in late June, they actually blocked the execution of a man named Scott Panetti, basically on the grounds that he was mentally ill, and the case shouldn’t have even reached the Supreme Court. I mean, the lower courts mishandled it.

So, even though, you know — the board decision is the one that we’re hoping for. But if the board doesn’t recommend clemency, the Supreme Court could intervene. And the execution last night that you mentioned, DaRoyce Mosley, the Supreme Court actually did step in at the last minute and delayed that execution for five hours, and ultimately the execution did go through. But they do seem to be paying attention to Texas.

AMY GOODMAN: I interviewed Kenneth Foster’s family earlier this month. This is his 11-year-old daughter, Nydesha Foster, talking about her father.

NYDESHA FOSTER: When somebody is a big part of your heart, like my father is — I mean, my father is more than half of my heart. I mean, I love him so much. And if the State of Texas kills him just for driving a car, it’s like you’re killing my heart. It’s like you’re killing half of me. It’s like if you execute him, you might as well execute me, because of the type of things and the could-have-should-have-known stuff, and it’s just how the Texas Law of Parties, they just really need to take the time to listen, and my dad probably would not be in the predicament that he is in, if the Law of Parties would take the time to listen to us.

AMY GOODMAN: That’s Nydesha Foster, Kenneth Foster’s 11-year-old daughter. She hasn’t touched him in 10 years. He went to prison when she was one. Juan?

JUAN GONZALEZ: Yes, on the Supreme Court appeal, will this be — this wouldn’t be a hearing. It would be a decision by one of the judges, or would it be the whole court that would have to make the decision?

LILIANA SEGURA: I believe it’s by one of the judges. That’s usually how it happens. And so, that could happen any time between now and right up until the last minute before the execution. So in the meantime, there’s supposed to a protest in front of the Supreme Court today, I believe, in D.C. There are multiple sort of protests going on in Austin, in front of death row, in front of the death chamber, as well.

And if people want to sort of voice their concern or their opposition to the execution, they can still call the board, and I would recommend that. You can find the number online. But if you go to freekenneth.com, you can get all the information. So that’s what we’re encouraging people to do in these next hours. And after that, we’ll see how we proceed.

AMY GOODMAN: And we’ll continue to follow it. We’ll be in New Orleans tomorrow, but we’ll report on the latest on the decisions. Liliana Segura, thanks for joining us, member of the Campaign to End the Death Penalty, freelance write, writes for Alternet and The Nation. 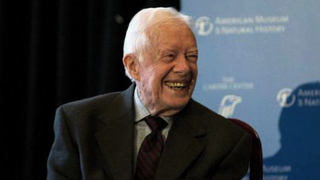