The Tyranny of Oil: Antonia Juhasz on “The World’s Most Powerful Industry — What We Must Do to Stop It”

Along with so-called clean coal technology, both of the major presidential candidates also supporting expanded offshore oil drilling. We speak to Antonia Juhasz, author of the new book The Tyranny of Oil: The World’s Most Powerful Industry — And What We Must Do to Stop It. [includes rush transcript]

Meanwhile, the price of oil continues to fall. On Monday, oil briefly fell below $90 a barrel for the first time since February. This marks a nearly $60 drop since July.

Joining us now is Antonia Juhasz, author of her second book, The Tyranny of Oil: The World’s Most Powerful Industry — and What We Must Do to Stop It. She is fellow with Oil Change International and the Institute for Policy Studies. Her earlier book is The Bush Agenda: Invading the World, One Economy at a Time.


ANTONIA JUHASZ: Thanks for having me.


AMY GOODMAN: What do you mean by the tyranny of oil?


ANTONIA JUHASZ: Well, I mean that this is, at this point, the most powerful, most profitable, most politically dominant set of companies in the United States and in the world. They are creating a tyrannical rule over our government with a resource that is creating a tyrannical impact on our climate and driving us towards a climate extinction and, of course, war.


AMY GOODMAN: Why are oil and gas prices so high?


The banks that have survived so far: Morgan Stanley, Goldman Sachs, the two banks with oil companies that founded their own unregulated crude futures exchange, on which the majority of crude oil futures are now traded, which have sent the price skyrocketing and put, essentially, control of this — the most important factor determining the world economy into the hands of speculative traders, many of whom are former Enron traders, working at the banks, working at the oil companies and working at hedge funds.


AMY GOODMAN: You have a chapter called “Lobbyists, Lawyers and Elections: How Big Oil Kills Democracy.”


ANTONIA JUHASZ: Yeah, one of the things that I found fascinating, actually, in doing my own research and as someone who has worked for two members of Congress, was to uncover how this profit — and just to be clear, these are the highest profits in the history of the world, unparalleled with any other industry.


ANTONIA JUHASZ: Big Oil, the big oil companies: Exxon — Exxon Mobil, Chevron, ConocoPhillips, BP/Shell, also Marathon and Valero, are the biggest companies operating in the United States. The profits are unparalleled, with the defense industry, pharmaceuticals, banks, you name it, no comparison.


So this money just infiltrates every layer of government, from the most local level — I tell the story of Richmond, California, near where I live — to the state level, federal, international, and permeates, not just in campaign contributions, which of course is important — so far, about $1.6 million by the oil industry to McCain-Palin, a little less than $400,000 to the Obama-Biden ticket, a pretty clear difference there, about 75 percent of oil given to Republicans overall. But campaign contributions are just the very tip of the iceberg. It really is lobbying, where the big money comes in. It’s the front groups that you don’t even know are associated with the oil industry, where the influence comes in.


ANTONIA JUHASZ: Like, well, one that folks know is the American Petroleum Institute. Another is the US Chamber of Commerce, which is getting more and more and more money from the oil industry and doing more of its bidding. The US Chamber of Commerce is by far the largest lobbying presence on the Hill. And that money permeates decision making, so that when we should be winning, when even people like Governor Palin say, “Climate change is a real issue, it’s a problem, it’s affecting my state,” at the same time we can eliminate a twenty-seven-year moratorium on offshore drilling. We can do it for shale. We can go into tar sands. It’s ridiculous.


AMY GOODMAN: How did that happen?


ANTONIA JUHASZ: Money. Simple. Very, very simple. Both candidates, Obama and McCain, changed their previous opposition to offshore drilling. The opposition to offshore drilling is based on, one, it’s incredibly expensive and, in the words of a Chevron executive who I quote in the book, “a total crapshoot.” $120 million per hole. 80 percent are dry holes. We already know from the Bush administration, ten years until offshore drilling is likely to do anything for anyone, except the oil companies. So why do they do it if it’s not going to lead to oil? It will lead to some oil, and they know that oil is only going up, and it lets them book those reserves, count the potential reserves as their oil, to move their stocks up.


So, terrible for the environment — really quickly, on Governor Palin’s constant statement, “clean” offshore drilling? Just like clean coal, absolutely unreal, an unreal statement, for many reasons. One of them is that drilling at water depths of 500 feet or greater — and now we’re talking about water depths of 1,000 feet, 5,000 feet — any drill that — any hole that’s 500 feet or lower releases methane, a greenhouse gas at least twenty times more potent to climate change than CO2. There’s no such thing as clean drilling. It’s just clean and easy for the oil industry to book reserves, environmentally devastating for the rest of us.


AMY GOODMAN: What about this huge fluctuation in oil prices? I mean, you go from, what was it, $140 this summer, now to $90. What explains it?


ANTONIA JUHASZ: Well, a lot explains it. The most important thing, of course, that explains it is the trauma to all of the financial markets. And these are — these markets, of course, are intimately linked. As I said, most of the energy trading is coming out of oil companies, banks, hedge funds. The banks are also morphing into oil companies. So, Morgan Stanley and Goldman Sachs, in particular, buying up oil fields, buying up pipelines, becoming oil companies themselves, as a way to solidify their income base.


But the price has been so volatile, because the energy traders are trying to figure out how best to capture and hold onto their profits in a completely unregulated, thoroughly manipulated market. I think we can definitely expect a continuation in the fluctuations, but most likely, the price is definitely just going to go up and up and up.


But also, to say that the last time that oil surpassed, or the first time in fact that oil surpassed $100 a barrel, was in 1981. That set off a global recession, from which, in particular, the developing countries are only beginning to emerge from. We have now, of course, entered into another global recession, based on, I would argue, primarily, the first impact being the price of oil going up. This is a resource to which we have to have control. We have to be able to regulate it. It cannot be being manipulated by Big Oil, big banks, for their interests, as opposed to larger global and social interests.


AMY GOODMAN: You talk about wars for oil.


ANTONIA JUHASZ: Yeah, I mean, one of the things that’s been amazing was with Senator McCain constantly reiterating this need for US energy independence, as if more drilling would give us that, which is another topic, but his admittance essentially that we are engaging in wars for oil, and if we don’t want to do that, in his framework, we’re going to need to drill more in the United States — I think a clear admission that we are, of course, engaged in wars for oil and will continue to do so.


I think it’s quite clear that the invasion of Iraq was a war not for the United States to potentially get a greater supply of oil, but rather for Exxon, Chevron, ConocoPhillips, BP/Shell, to get their hands on Iraqi oil, believed to be the second or the largest remaining conventional source of oil. I mean, essentially, there’s very little conventional oil left out there, relatively speaking to what we use. The oil companies need to gain greater ownership of what’s left. What’s left is in three countries — Iran, Iraq and Saudi Arabia — largely. Of course, it’s in Africa, and that’s why the Bush administration formally launched AFRICOM this week. We’ve got oil, of course, in Venezuela, and sporadic —-


ANTONIA JUHASZ: AFRICOM, the new US Defense Central Command for all of Africa. Many members of the Bush administration and even generals who are participating in Africa have been quite clear to say it’s about oil, it’s about making sure we can control African oil. The Bush administration has used our military to expand access to oil all over the world, but the big pockets of oil: Iran, Iraq, Saudi Arabia.


And if we want to end this -— the war in Iraq for oil, prevent a war in Iran, prevent militarization for oil around the world, one of the key things I believe we must accomplish is bringing into control, bringing into a sizable entity, Big Oil, so that its profits cannot dominate our political decision making.


AMY GOODMAN: How do you propose taking on Big Oil, Antonia Juhasz?


ANTONIA JUHASZ: A number of ways, but two very simple ones. A great campaign launched by Oil Change International calling for the separation of oil and state, essentially based on the very successful campaigns against the tobacco industry in the 1990s that made it toxic for elected officials to receive tobacco money. It became a badge you did not want to wear. And they started not taking that money, and it made it possible to start regulating an industry that everyone thought was impenetrable throughout the ’90s, now no longer considered quite so quite so much. Oil, of course, another toxic substance on which we have developed an intense addiction. Getting candidates to renounce all oil industry money and calling on individuals to vote for the least oily candidate out there, and being able to hold election promises to account after elections.


Also, of course, dealing substantially with lobbying reform, reducing consumption, investing in alternatives and public transportation, and, I believe, following the model of the successful populace a hundred years ago who broke up Standard Oil, breaking up the big oil companies today.


AMY GOODMAN: Antonia Juhasz, I want to thank you for being with us, congratulate you on your second new book, The Tyranny of Oil: The World’s Most Powerful Industry — And What We Must Do to Stop It.

Is Posse Comitatus Dead? US Troops on US Streets

NEXTIs Posse Comitatus Dead? US Troops on US Streets 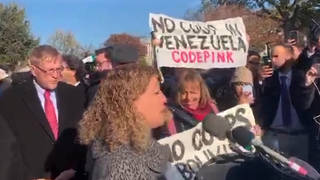