Report: Over 23,000 Business Leaders Working With FBI and Homeland Security

The Progressive magazine is reporting that more than 23,000 representatives of private industry are working quietly with the FBI and the Department of Homeland Security. The business leaders form a group known as InfraGard that receives warnings of terrorist threats directly from the FBI before the public does. We speak with the the reporter who broke the story and the editor of The Progressive, Matt Rothschild. [includes rush transcript]

StoryJan 09, 2019William Arkin on Homeland Security’s Creeping Fascism and Why the CIA & FBI Won’t Save Us from Trump

AMY GOODMAN: More than 23,000 representatives of private industry are working quietly in collaboration with the FBI and the Department of Homeland Security, this according to an exclusive report in The Progressive magazine. The business leaders form a group known as InfraGard that receives warnings of terrorist threats directly from the FBI before the public does. In return, they provide information to the government. According to one whistleblower, the FBI has given members of InfraGard permission to shoot to kill in the event of martial law.


Matt Rothschild is the reporter who broke the story. He is editor of The Progressive magazine. He’s author of the book You Have No Rights: Stories of America in an Age of Repression. He joins us from Madison, Wisconsin.


MATT ROTHSCHILD: Thanks for having me on, Amy.


AMY GOODMAN: Can you talk about InfraGard and what this program is all about?


MATT ROTHSCHILD: Yeah. It was formed in 1996 by the FBI. It’s an FBI program that works directly with businesses across the country. More than 350 of the nation’s 500 Fortune 500 companies are involved in it. And on one level, it’s like a corporate TIPS program. These companies, these representatives of these companies feed the FBI information about threats. They also can give the FBI information about disgruntled employees and have the FBI investigate them. So the pipeline goes that way.


And the pipeline goes the other way, too. The FBI gives these 23,000 businesspeople almost daily threat warnings that the public never gets. In at least one occasion, a government official, Governor Gray Davis of California, didn’t get, until he heard from his brother, who was in InfraGard, about threats to the bridges in California.


MATT ROTHSCHILD: Well, you know, it started — the FBI started it in 1996 in Cleveland, and it was working with businesses to, I think, try to break a case of cyber espionage or something. And then the FBI decided to start little organizations around the country. There are now eighty-six chapters of InfraGard. And the FBI and now Homeland Security are working with these local chapters, statewide chapters, and they have meetings. They have these secretive meetings around the country, and at some of these meetings, the FBI and the Homeland Security agents tell businesspeople what their responsibilities are during times of an emergency or martial law.


AMY GOODMAN: How did you learn about this story, Matt Rothschild?


MATT ROTHSCHILD: Well, Amy, it’s interesting. A friend of mine who works in radio told me about it, because I had been on his show talking about the May 9th, 2007 national security directive that George W. Bush had issued, that national security directive on national continuity policy. Bush gives to himself the power to control the whole government and the responsibility to take care of our Constitution, if you can believe that, given what he’s done to our Constitution so far, in times of an emergency. And in that document, that May 2007 document, Bush talks about the need to work in times of an emergency with private-sector actors.


So I was on his show, Lee Rayburn’s show, talking about this, and after the show he said, “You’ve got to listen to something we just heard from a whistleblower,” who told him he was a member of this organization InfraGard that I had never heard of, Amy. And it’s been kind of hidden in plain sight there, because you can go find out about it at www.infragard.net — you need the “ww”s for some reason.


Anyway, so I finally got around to talking to this whistleblower, because I was a little skeptical. You know, I’ve been an editor for twenty-eight years, so I try to be skeptical about just about everything. And this idea that they would have permission to shoot to kill in times of an emergency, that struck me as a little bit out there. And yet, I talked to him.


I took careful notes. He described a meeting at a place where Homeland Security and the FBI were giving a talk to maybe thirty people. I took the information back. I called around to where the meeting was held. I talked to other InfraGard members who confirmed that that meeting actually had taken place and that there were FBI agents there and a Homeland Security agent there. And so, I was beginning to believe what this guy said, and I do believe what he said, because he has no motive to actually tell me this.


He was a member of InfraGard. He showed me his little InfraGard card with his email address on it and with the emergency numbers of Homeland Security and FBI on the back in case of emergencies. And so, I tried to find other people and did manage to find other InfraGard members who would talk to me about these emergency preparedness exercises that the FBI and Homeland Security has been conducting with these 23,000 businesspeople around the country. And one other member of InfraGard confirmed to me that she had actually been at meetings and participated in meetings where the discussion of lethal force came up, as far as what businesspeople are entitled to do in times of an emergency to protect their little aspect of the infrastructure.


AMY GOODMAN: But just to clarify, Matt Rothschild, who exactly is empowered to shoot to kill if martial law were declared? The business leaders themselves?


MATT ROTHSCHILD: The business leaders themselves were told, at least in this one meeting, that if there is martial law declared or if there’s a time of an emergency, that members of InfraGard would have permission to protect — you know, whether it’s the local utility or, you know, their computers or the financial sector, whatever aspect. Whatever aspect of the infrastructure they’re involved with, they’d have permission to shoot to kill, to use lethal force to protect their aspect of the infrastructure, and they wouldn’t be able to be prosecuted, they were told.


AMY GOODMAN: I understand there’s going to be a meeting of InfraGard here in New York on February 20th at Hunter College.


MATT ROTHSCHILD: I mean, everyone I talked to in InfraGard, including Phyllis Schneck, who is the chair of the National Members Alliance of InfraGard, who is really the prime mover behind the organization’s growth — and this thing has grown dramatically, Amy, over the last several years. There were only 1,700 members after 9/11, and now there are 23,000 members. And the FBI director said, “You’re our first line of defense.” That’s what he told these businesspeople.


You know, this is a secretive organization. They’re not supposed to talk to the press. You need to get vetted by the FBI before you can join it. They get almost daily information that the public doesn’t get. And then they have these extraordinary, really astonishing powers being vested in them by FBI and Homeland Security, shoot-to-kill powers. I mean, this is scary stuff.


AMY GOODMAN: Curt Haugen, CEO of S’Curo Group, how does he fit into this story?


MATT ROTHSCHILD: This is a businessperson in Wisconsin who I called up and who identified himself after I asked him whether he was an InfraGard member. He said yes. He said he was a former FBI agent. And he loves InfraGard. He thinks it’s a great organization, because, he says, it’s all about who you know, and if you’re involved with InfraGard, you can really get that public-private partnership going. For them, private-public partnership means working the private sector and the FBI getting these daily feeds of secretive information and being able to go back and forth on some encrypted, you know, message board or something.


And he said — I asked him point blank, after he was boasting about what a great organization InfraGard was, I asked him, “Well, what about this use of lethal force that I’ve heard that Homeland Security and FBI tell you members of InfraGard you can use in times of an emergency?” And he said, “Well, I can’t really comment about that. But, of course, if someone’s trying to break into your home, you have the right to defend yourself.”


AMY GOODMAN: Finally, Matt Rothschild, how does this story that you’ve just exposed fit into the many stories that you write about in You Have No Rights: Stories of America in an Age of Repression?


MATT ROTHSCHILD: Well, it’s just another piece, you know. It’s another piece of our Bill of Rights just going down the tubes. It’s another aspect of repression that the Bush administration has built up. It goes along with, you know, the illegal searches and seizures. It goes along with Guantanamo and torture. It’s kind of all of a piece, and once you put the pieces of the puzzle together, it’s really frightening what’s happening to our democracy here, Amy.


AMY GOODMAN: Well, I want to thank you very much for being with us, Matt Rothschild, joining us from Wisconsin Public Television. He’s editor of The Progressive magazine. His latest article is “The FBI Deputizes Business.” 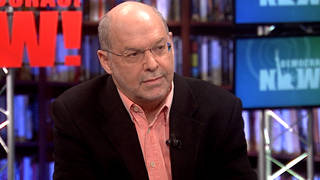