Antiwar Democrat Donna Edwards joins us to talk about her defeat of eight-term Congress member Albert Wynn in Tuesday’s primary vote. The Maryland race had been described as “a bellwether contest in the fight for the soul of the Democratic Party.” If Edwards wins in November, she’ll be the first African American woman elected to Congress from Maryland. [includes rush transcript]


The race was a rematch of the 2006 primary election, when Wynn held onto his seat by a few thousand votes. This time around, Donna Edwards defeated Wynn by a wide margin, receiving about 60 percent of the vote, while Wynn got about 35 percent. The race has been described by The Nation magazine as “a bellwether contest in the fight for the soul of the Democratic Party.”


Edwards ran a populist, antiwar campaign that drew support from national liberal groups. She criticized Wynn for his votes tied to Iraq and the housing crisis. If she wins in November, she will be the first African American congresswoman to represent Maryland.


Donna Edwards joins us now on the phone from Maryland. Welcome to Democracy Now!


DONNA EDWARDS: Hi, Amy. It’s great to be on Democracy Now! this morning.


AMY GOODMAN: It’s good to have you with us. Well, despite the very severe weather, the polls were open, what, an extra hour and a half last night?


AMY GOODMAN: You have been declared the winner. Can you tell us what you think did it this time around? You lost to Wynn last time by a very small percentage.


DONNA EDWARDS: Right. I mean, I lost in 2006 by a very narrow margin. But I think that this time we put together, you know, a campaign operation that really built on the momentum of 2006, carrying a message of, you know, the need to focus on working people, on healthcare, on getting out of the war in Iraq, on an education system that works for all our children. And people took that message, they believed the change was important and required, and they cast their votes yesterday, and it was an overwhelming victory.


AMY GOODMAN: Can you talk about your differences with Congressman Wynn over Iraq? You made that a major issue of your campaign. He’s a Democrat.


DONNA EDWARDS: Well, I mean, the congressman voted to authorize the war in Iraq, and I believe that that was, you know, a very poor decision and that the resulting both human cost and financial cost of the country has been huge, not to mention our position, the United States’s position, in the world. And I don’t think that his vote fairly represented our congressional district. And I believe that those voices needed to be heard in the Congress by somebody who’s a standup Democrat who represents this congressional district. I think the voters got that message. And, you know, voters have an awful lot of things going on in their minds [inaudible]. We have a troubled economy. We’re facing record foreclosures in our congressional district, just like around the country. And we want somebody who really speaks for real change and who will make a difference in the lives of working people. And those messages came through yesterday.


AMY GOODMAN: If you win in November — and yours is a heavily Democratic district — you will become the first African American woman to represent Maryland in Congress. Can you talk about what that means to you, what you feel that means to Maryland and the country?


DONNA EDWARDS: Well, you know, I mean, I think it’s obviously a tremendous step forward for the country. And in the course of the campaign, we had a chance to talk about a range of different issues and concerns, and this actually never really, you know, came up. And certainly the force of history was out there for us. And now, I’m just so humbled by the prospect of serving. I fully expect to win in November. We are an 80 percent Democratic district, and I’m going to use the time between now and January 2009, when I’m sworn into the next congress, to build an agenda that will work for our congressional district and set us on a new path for the country. And so, I’m excited about that.


AMY GOODMAN: The idea that this is a victory over the DLC, the Democratic Leadership, “a bellwether contest” for “the fight of the soul of the Democratic Party” —- can you talk about the stands you took?


DONNA EDWARDS: Well, I know that in our congressional district, the people of the Fourth District in Maryland stood up against corporate special interests that are determining what kind of healthcare we have or we don’t, that are determining our energy policy. They were saying no to the corporate special interests and yes to the public interest. And they know that I’m a public interest fighter and that that’s not going to change in the Congress, because it’s what I’ve done for twenty years. And so, I think that we are exactly the kind of district that deserves to be represented by a progressive Democrat in the Congress and to have that voice heard and known, and that will best represent our interests locally and our interests nationally.


AMY GOODMAN: Donna Edwards, the subprime crisis, your difference with Congressman Wynn there and around issues of bankruptcy and how he voted?


DONNA EDWARDS: —- the Congress has had a duty to actually protect consumers and homeowners, and we failed in that responsibility. And the result for consumers in our district and around the country have been a disaster. And so, we’re facing, you know, record foreclosures, at least in part of our congressional district. This is impacting the entire marketplace. It’s impacting, you know, us locally. And I think it’s time for us finally to get, you know, control and re-regulate the banks and the credit card industry to say yes to consumers and yes to homeowners and to put some brakes on an industry that has been allowed to get away with highway robbery in some cases and take advantage of consumers.


We felt that in this race. I have been talking about these issues for actually the last two years, well before most people even recognized we had a real crisis, because I could see it through our congressional district. And, you know, I plan to be in the Congress so that we can have a little bit of foresight on these things, instead of waiting until after the fact, after people have lost their homes, after consumers have been harmed, to do the business of the American people.


AMY GOODMAN: Finally, Donna Edwards, the massive voter turnout all over the country, including in the Potomac primary that we’re seeing, particularly in the Democratic presidential primaries, how did that affect your race?


DONNA EDWARDS: Well, you know, what is very interesting is that all along, from the beginning of this campaign, we were actually planning for a larger-than-usual turnout. And that was well before the trend was set around the country. And so, we based our entire strategy on having an increased turnout, and I think that that paid off.


AMY GOODMAN: Donna Edwards, I want to thank you for being with us. Donna Edwards has defeated the eight-term incumbent Democratic Congress member, Albert Wynn, in Maryland’s Fourth Congressional District. If she is elected in November to Congress, she will be the first African American woman to represent Maryland in the US Congress.

In Defense of Food: Author, Journalist Michael Pollan on Nutrition, Food Science and the American Diet 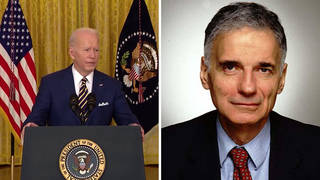