Jailed Palestinian Professor Sami Al-Arian has entered the nineteenth day of a hunger strike to protest what he calls continued government harassment. He was brought before a third grand jury Thursday, but did not testify. We speak with Al-Arian’s eldest daughter, Laila, and his local counsel in Virginia, Will Olson. [includes rush transcript]

JUAN GONZALEZ: Jailed Palestinian Professor Sami Al-Arian has entered the nineteenth day of a hunger strike to protest what he calls continued government harassment. He was brought before a third grand jury Thursday, but did not testify.

Al-Arian has been in prison for five years on charges that he was a leader of the Palestinian Islamic Jihad. Two years ago, a Florida jury failed to return a single guilty verdict on any of the seventeen charges brought against him. Despite the jury’s findings, Al-Arian remained behind bars. Last year, Al-Arian was imprisoned for an additional eighteen months for refusing to testify before a Virginia grand jury.


AMY GOODMAN: We’re joined now here in the firehouse studio by Laila Al-Arian, the eldest daughter of Sami Al-Arian, a freelance journalist here in New York. Joining us on the phone from Washington, Will Olson, the local Virginia counsel for Sami Al-Arian.


We welcome you both to Democracy Now! Can you describe, Laila, what has happened now? He was not convicted on any of the seventeen charges. They deadlocked on, what was it, nine of them, and they acquitted him on seven counts?


AMY GOODMAN: Eight counts. So then what happened? He did do a plea bargain?


LAILA AL-ARIAN: Yes, a few months later, he plea-bargained with the government, because even though the government had the option of dropping all the charges against him and releasing them, they threatened to retry him, and he did sign a plea agreement, pleading guilty to one count of providing services. And —-


LAILA AL-ARIAN: Services to a designated terrorist organization. And basically, if you actually look at what he pled to, though, it was helping immigrants come to this country, helping his brother-in-law, my uncle, who was imprisoned under the use of secret evidence in the 1990s. So if you look at the statement of facts of what he pled to, it was actually pretty innocuous activities.


However, after that, a prosecutor in Virginia by the name of Gordon Kromberg started to subpoena my father to testify in a completely unrelated case before a grand jury. My father, when he was signing the plea agreement, said that cooperation was not a clause, that it was out of the question for him to be forced to cooperate and comply with the government. So my father so far has been brought before a grand jury three times. He was held in civil contempt for not testifying for eighteen months.


And the prosecutor who’s after him has made on-the-record anti-Muslim statements; he said he doesn’t want to assist in the, quote, “Islamization of America and of the American justice system.”


AMY GOODMAN: Who is this?


LAILA AL-ARIAN: His name is Gordon Kromberg. He’s in the Eastern District of Virginia. And the other option is for him not to testify, which is what he’s been doing and which is why he’s on a hunger strike right now, because he will not testify. This is a violation of his plea agreement, in which he’ll be charged with criminal contempt and facing a minimum of five more years in prison. This is outrageous.


JUAN GONZALEZ: And these other grand juries, the targets or the subjects of their investigation, does anyone know? Or —-


LAILA AL-ARIAN: Well, it’s an Islamic think tank in Virginia. But what we believe is it has nothing to do with this organization. This is just a way -— they couldn’t convict my father in court. This is a way for them to convict him in other means. And it needs to stop.


AMY GOODMAN: Will Olson, you’re a lawyer in Virginia. If he believed, when he was signing this plea agreement, that it meant he did not have to testify before any future grand jury, how is it that he’s now been called before a third grand jury?


WILL OLSON: Well, the government’s position on the plea agreement is that the non-cooperation — there was not a written non-cooperation clause included in the written plea agreement. Dr. Al-Arian’s position is, during the course of his plea negotiations with the Middle District — the US attorney’s office for the Middle District of Florida, that it was an understanding of the parties that — throughout the negotiation, a basic understanding of their agreement was that Dr. Al-Arian would not cooperate with the government and that that was underlying in the entire negotiation.


When that plea agreement was formalized in writing, there was not a clause that required Dr. Al-Arian to testify, and it’s standard in the Middle District of Florida to have a clause that says that if you agree — that if you are pleading to something, that you have to cooperate with the government. That standard cooperation clause was omitted. Unfortunately, there was not language included in the agreement that states that Dr. Al-Arian is not obligated to corporate with the government.


When Dr. Al-Arian was called before the grand jury in Virginia, his legal team moved to enforce the plea agreement in Florida to block his appearance before the grand jury. The trial court in Florida, back in November of 2006, denied that motion, that the trial court took the position that because it was not in writing in the plea agreement, there was not a clause for the plea agreement that he didn’t have to cooperate. That decision was appealed to the 11th Circuit in Florida. That was denied. But we are again appealing to the 11th Circuit, as a whole. The way the procedure works is, once you’ve appealed to a panel of an appellate court, a circuit court, and if you disagree with that opinion, you can ask for the entire 11th Circuit to review the decision, and that’s what we’ve done.


AMY GOODMAN: Laila, we just have ten seconds. But your father’s health right now? He’s a diabetic. It’s his second fast. He dropped something like fifty pounds on his first.


AMY GOODMAN: You just visited him in jail. He’s in a medical clinic in the jail.


LAILA AL-ARIAN: He’s lost thirty pounds. He’s very weak. He has been having chest pains. And we’re just asking everyone to keep up with this case, write letters to the Judiciary Committee in the House and Senate. And for more information, they can go to freesamialarian.com.


AMY GOODMAN: I want to thank you both for being with us, Will Olson in Virginia and Laila Al-Arian, the eldest daughter of former University of Southern Florida Professor Sami Al-Arian. 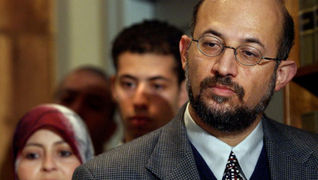