In Paraguay, a former Catholic priest once known as the Bishop of the Poor has been elected president. Fernando Lugo will be the first Paraguayan president since 1946 not to be from the conservative Colorado Party. Lugo won 41 percent of the vote, beating Blanca Ovelar, who received 31 percent. Lugo has pledged to crack down on corruption and channel Paraguay’s wealth into social programs. We go to Asuncion to speak with journalist Michael Fox. [includes rush transcript]

AMY GOODMAN: A former Catholic priest once known as the Bishop of the Poor has been elected president. Fernando Lugo will be the first Paraguayan president since 1946 not to be from the conservative Colorado Party. Lugo won 41 percent of the vote, beating Blanca Ovelar, who received 31 percent. Lugo has pledged to crack down on corruption and channel Paraguay’s wealth into social programs.

PRESIDENT-ELECT FERNANDO LUGO: [translated] May we never again, in the political class of Paraguay, never again base our politics on clientism and enticements, because it has done so much to damage our national politics.

AMY GOODMAN: Lugo’s win ends more than six decades of one-party rule in Paraguay. Election officials said Sunday’s voting had the highest turnout, about 66 percent, of any presidential election since 1993.

Lugo is the first bishop ever to become president of a country. Both Paraguay and the Vatican ban clergy from seeking political office, so Lugo resigned in December 2006. Lugo says he was influenced by the liberation theology of the ’60s. He told the Associated Press he would not move to the presidential palace, remaining instead in his modest house in a middle-class suburb. He said the first lady would be his eldest sister.

Washington has signaled a willingness to work with Lugo and hailed his election as a “step forward” in Paraguay, but a State Department official told the Los Angeles Times his victory had left Washington worried about its waning influence in Latin America.

In a pre-election interview with the Los Angeles Times, Lugo noted Washington’s sometimes-contradictory role in Latin America, saying, “The United States…has sustained the great dictatorships, but afterward lifted the banner of democracy.” He went on to say Washington must acknowledge a new scenario in which Latin American governments “won’t accept any type of intervention from any country, no matter how big it is.”

For more, we turn to Michael Fox, a freelance journalist based in Latin America, joining us now on the telephone from the Paraguayan capital Asunción, where is he reporting for Free Speech Radio News and Upside Down World.


We welcome you, Michael Fox, to Democracy Now!. Talk about the significance and the background of the priest who has won the presidency.


MICHAEL FOX: You know, this is — it’s one of these really, really amazing moments here in Paraguay. Before I go onto Lugo, I just want to kind of put this into perspective. For listeners, imagine — it’s almost as if, for many Lugo supporters, as if the dictatorship, from the longtime Alfredo Stroessner dictatorship that fell in 1989, is finally coming to an end, because in 1989, when Stroessner fell, basically it was just a kind of a party share, the powers passed over to the Colorado Party, and they’ve been in power until now. So, literally, I was in the streets for the victory celebration just a few nights ago, and, you know, grandmothers, ages sixty, sixty-two, sixty-three, saying, “This is the first time in my life, you know, we’re actually — we’ve won. We can’t even believe that we’ve won. This is the most amazing thing that’s ever happened to me.”


Lugo is one of these people that’s kind of just jumped onto the political scene. As you said, Amy, he’s, you know, the Bishop of the Poor. He worked for many years in San Pedro, which is the northernmost and poorest province of Paraguay, working with campesino movements and in indigenous communities. He kind of came on the scene about a year and a half ago, and it’s been this movement of social movements, campesinos, political parties, that’s kind of all joined together and really supported his campaign. And it’s been extremely powerful, and people across Asunción are — you know, can’t believe he actually won.


AMY GOODMAN: How did he win?


MICHAEL FOX: He — do you mean the numbers, or how did he — how was he able to achieve his victory?


AMY GOODMAN: How — I mean, how did he come on the political scene, and what was — how did he campaign around the country? What are the major issues that he addressed?


MICHAEL FOX: Excellent. He came on the political scene about a year and a half ago. The current president, Nicanor Duarte Frutos, had done something that was unconstitutional to the constitution. He had, you know, tried to make himself party president of the Colorado Party, the longtime, longstanding Colorado Party, which he was able to do. So you basically have this kind of instantaneous large grassroots mobilization against that that came out on the streets. And this was the first time that Lugo spoke. He was always supporting grassroots social moments, but this was the first time that he was the main speaker at this event.


From there on out, you had a number of different grassroots social movements, this movement Tekojoja, which is a movement that kind of grew out of that moment, and they began to support the idea that he might actually run for president, without any possibility or ever thinking that they would actually win. He began to travel around the country, and really it kind of just brought together all of this support and all of the resignation that people had against the Colorado Party.


And so, obviously, whether it’s from the left or to the right, people really kind of came out, and they said, “You know what? We want change.” And that’s why they decided to go for Lugo. The campaign, obviously, against Lugo, in terms of the fear campaign, was extremely strong. You had Nicanor Duarte Frutos who was, you know, calling out and saying that Venezuela was getting involved and that destabilizers from Venezuela were going to come here and destabilize the elections and what not. But in the end, he was victorious. And it’s really a — it could create huge change here in Paraguay.


AMY GOODMAN: Michael Fox, some say Iraq saved Latin America, that with the Bush administration’s focus on Iraq, that the Latin American governments have much more reflected the base, the people in their countries, rather than pressure from the United States. Can you talk about the leftward shift of the governments of Latin America and how Father Lugo, the priest, now president, fits into that?


MICHAEL FOX: You know, it’s really interesting, and Amy, I’m glad you brought this point up, because across Latin America you have had this huge leftward shift. I mean, some of them, it’s more progressive, such as Venezuela’s Hugo Chavez, Evo Morales in Bolivia, Rafael Correa in Ecuador, who, you know, are trying to create the new constitutions. They’re really trying to bring power and give power down to the base and flip the whole system upside-down. Now, you have other countries, like Michelle Bachelet in Chile, Tabare Vazquez in Uruguay, who are more kind of liberal democrat, but still on the left.


You know, it’s really difficult to say exactly where Lugo is going to stand. Paraguay itself is extremely, extremely important within the whole geopolitical structure of Latin America. Why? Because it’s just on the southern border of Bolivia, it’s on the western border of Brazil, the northern border of Argentina, it’s very close to Uruguay. It’s kind of the center of what is Latin America. And especially within the past couple of years, there was reports that came out a couple years ago that the United Staets was sending — had sent 500 troops to a military base here close to the Bolivian border. Now, it’s difficult to say what in these — what these changes — what will actually happen once Lugo comes into power on August 15th, whether, you know, he’ll follow along more in the lines of the footsteps of Hugo Chavez or whether he’ll line up a little bit more with Tabare Vazquez of Uruguay.


Regardless, geopolitically speaking, it’s a huge victory and especially really interesting for this country of, you know, six million people. You’re talking about a country almost the size of California, that’s tiny. And the people here, they’re not used to having — being inundated by international press. There’s like a hundred press agencies that sent people down here for the elections. And so, really, this is a huge win for the left in Latin America, and it’s going to be interesting to see how things develop in the coming months.


AMY GOODMAN: Michael Fox, I want to thank you for joining us from Asunción, the capital of Paraguay, where the priest, Father Lugo, has now won the presidency, reporting for Free Speech Radio News and Upside Down World.

Pentagon’s Pundits: A Look at the Defense Department’s Propaganda Program

NEXTPentagon’s Pundits: A Look at the Defense Department’s Propaganda Program 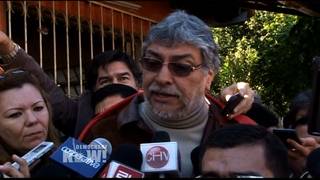