Juan Gonzalez reports on Puerto Rico’s contentious primary, where voters can choose a presidential candidate but can’t vote for them in the general election. And he details a remarkable boycott at a South Bronx middle school, where more than 160 students recently refused to take a three-hour standardized test. [includes rush transcript]

AMY GOODMAN: In this brief segment, Juan, you’ve been away for a little while. You were in Puerto Rico?


JUAN GONZALEZ: Yes, I was there to cover the preparations in Puerto Rico for the upcoming presidential primary there, which is a week from this Sunday in Puerto Rico. And it’s actually pretty — for Puerto Rico itself, it’s a bigger event, because obviously most Puerto Ricans on the island do not get to vote in presidential elections. However, for several decades now, they have been able to vote in the primaries to choose the Democratic and Republican candidates.


AMY GOODMAN: Explain the logic of that.


JUAN GONZALEZ: Well, the logic is that since Puerto Ricans cannot — are US citizens, but do not have votes in federal elections, either for — they elect a nonresident commissioner to the House of Representatives, but he doesn’t have a vote. So they don’t have votes in either the Senate or the House of Representatives, and they can’t vote for president.


But the parties decided several decades ago that to get Puerto Ricans more sort of invested in the American political process, that they would get — that they would allow them to have votes in their primaries. So you have the strange situation that Puerto Rico has more votes, more delegates to the Democratic convention than half the states in the union. And sixty-three delegates will be chosen. Some of them are superdelegates, but most will be chosen in a primary.


But the other problem is that the Democratic and Republican parties, per se, don’t really exist in Puerto Rico. The two main parties there are the pro-commonwealth Popular Democratic Party and the pro-statehood New Progressive Party. And they don’t actually correspond to our — to the mainland parties here, so that a good portion of the statehooders are also Democrats, most of the pro-commonwealth people are Democrats, but some don’t get involved in US politics. And, of course, you have the Independence Party, which is small but influential.


AMY GOODMAN: And, of course, these are the different groupings of people who want either commonwealth status, statehood for Puerto Rico —-


JUAN GONZALEZ: Or independence for the eventual status of Puerto Rico. So the Independence Party doesn’t even get involved in anything with US politics; that’s all colonial politics to them -— so that you’ve got a situation where the political parties — the Democratic or Republican Party doesn’t exist.


And the parties are split among themselves as to who they’re backing. For instance, the governor of Puerto Rico is backing Obama. So is the pro-statehood main candidate for resident commissioner, backing Obama. But the governor is right now damaged goods, because he’s been indicted, under federal indictment. And you’ve got the large majority of the people, though, recognize Hillary Clinton much more. They know more, have more relationship with her.


So the problem is that the labor unions are going to be the main mobilizing forces, not the political parties on the island. You have the SEIU, which is going to be — the Service Employees International Union, which is backing Hillary Clinton, mobilizing voters for Hillary — I’m sorry, the SEIU for Obama. The AFSCME is mobilizing folks for Hillary Clinton. And the unions are going to be the main force actually bringing people out, since the party apparatuses cannot function for this particular primary.


AMY GOODMAN: And Puerto Rico has one of the largest turnouts of voters in the country.


JUAN GONZALEZ: Well, it is, by far. In regular elections, 80 percent of the voters always vote in Puerto Rican elections. The problem is that the turnout is not going to be that high this time, because, again, their main political parties are not mobilizing in the same way, so that the estimates I have heard are anywhere — about 500,000 people. Normally you get two million people voting in Puerto Rican elections. You’re probably going to get anywhere, 500,000, 800,000. So it’s going to be a much smaller turnout than usual, but still relatively high —-


JUAN GONZALEZ: —- for US standards.


AMY GOODMAN: Why is it lower turnout?


JUAN GONZALEZ: Because Puerto Ricans, since they’re not voting in November, the vote for president is not as dominant an issue for them as it is here in the United States, so that I think that you will see a lower turnout, but you’ll see certainly a record turnout for any primary in Puerto Rico.


But the other interesting thing, I think, is that, you know, the SEIU, as we’ve covered on this broadcast, is in a major internal battle over its own democracy. And on May 31st, the day before the primary, SEIU’s national convention is going to be down in Puerto Rico, and Obama is going to be leading a march or a rally, since they have endorsed Obama, on Saturday, May 31st. And the teachers’ union of Puerto Rico, which is the largest union on the island, which was recently involved in a very bitter strike, where the SEIU sought to raid the teachers’ union and to get their members to arrange a deal with the governor to have their members join the SEIU. So the teachers’ union has called a major protest against the SEIU on Saturday, May 31st, when Obama is supposed to be speaking. There may be a very sharp confrontation there between unions, and Obama may be caught right in the middle of it, because he is going to be — supposed to be a speaker and participate in the SEIU rally. So we’ll see how that turns out a week from Saturday.


AMY GOODMAN: And an interesting point on this issue of the very large voter turnout in Puerto Rico, beyond any state in the country, is that it happens on Sunday, especially where we have in this country on Tuesday, Election Day, where many people can’t take off from work and don’t have time to go to vote. I mean, in many countries, you’ve got a — the voting day is a national holiday, Election Day.


AMY GOODMAN: Very quickly, you did a story yesterday: “New York 8th-Graders Boycott Practice Exam But Teacher May Get Ax.” He was fired, and what happened?


JUAN GONZALEZ: Yeah. Well, this is an amazing story in the South Bronx at an intermediate school. Last week, 160 out of 165 eighth graders in six classes boycotted a standardized — a practice test for a state test, because they were sick and tired of the constant testing that they’ve been submitted to over the years. They’re constantly, they say, being pulled out of their classes for standardized tests, sometimes for practice tests, sometimes just for dummy tests that the testing companies are trying to try out on students. And so, the entire eighth grade of this one intermediate school rebelled. They refused to take the test. They handed in a petition demanding an end to the oppression of all these tests.


And the response of the local principal was to fire the social studies teacher, because somehow she felt that he had instigated all of this. The students I interviewed said that they did it because they’ve been taught critical thinking and that they’ve decided that this kind of testing juggernaut has to be challenged.


JUAN GONZALEZ: Well, yes. He was a probationary teacher. The principal removed him from the classroom the day of the boycott and has now notified him yesterday that she intends to fire him.


AMY GOODMAN: Well, and we’ll continue to follow that story, as well as what is going on in Puerto Rico. 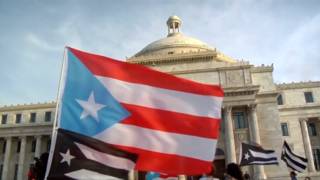