Public Citizen: Obama’s Inauguration, Sponsored by the Few, the Wealthy

Well, as many as four million people are expected to crowd the National Mall today — some say two, some say three; we’ll see — for Barack Obama’s inauguration. As with most political extravaganzas, it’s fundraisers that will be getting some of the best seats in the house. It’s the donors. Many will be celebrating not just the election of a new president, but closer access to the White House.


A new analysis comes from the campaign finance watch group Public Citizen, showing that nearly 80 percent of the $35 million inauguration will come from bundlers. While Barack Obama has banned corporate and lobbyist funding for the inauguration, he still accepted individual donations of up to $50,000 and bundled amounts of up to $300,000. Just over 200 bundlers have raised $27.6 million for the inauguration so far.


We’re joined here in Washington, not far from the Capitol, by Craig Holman, who is legislative representative at Public Citizen.


Welcome to Democracy Now! So give us a picture of the money that’s pouring in today.

We’re in the middle of the most expensive inauguration ever in US history. The numbers have gone up since we’ve done the last analysis. The last counting was about $42 million. And by the end of it, I expect it to reach about $50 million being raised and spent from private sources.


And the single largest sector paying for this huge inaugural event is Wall Street. You know, you already cited the figures that 80 percent of all this money has come just from 211 wealthy individuals who have bundled anywhere up to $300,000 each to help pay for the inauguration. Well, if you take a look at who those wealthy individuals are, you find that they are representatives of Citibank, of Wachovia Bank, of Goldman Sachs, of Lehman Brothers. These are the people who are footing the bill for the inauguration, for the most part. There is also bundlers representing Hollywood, as well as lawyers and law firms, but the single largest sector is Wall Street.


And what do you suppose Wall Street wants in return for all this, for paying for all these activities? It’s pretty clear. I mean, Wall Street is right in the middle of the largest bailout program we’ve ever seen of the financial sector. Obama is going to be presiding over that bailout program in just a matter of a couple hours. And it’s Wall Street that wants a seat at Obama’s table, when it comes to deciding the nature of the bailout program.

I’m looking at a report from ABC News, Craig, “What Recession? The $170 Million Inauguration.” It says, “The country is in the middle of the worst economic downturn since the Great Depression, which isn’t stopping rich donors and the government from spending $170 million, or more, on the inauguration.” They say the actual swearing-in ceremony costs about $1.24 million. It’s the security, the parties, the Porta-a-Potty rentals that really run up the bill. “The federal government estimates that it will spend roughly $49 million on the inaugural weekend. Washington, D.C., Virginia and Maryland have requested another $75 million from the federal government to help pay for their share of police, fire and medical services.


“And then there is the party bill.”


Linda Douglass, spokesperson for the inaugural committee, says, “We have a budget of roughly $45 million.” That’s more than the $42.3 million in private funds raised by — or spent by President Bush’s committee in 2005 or the $33 million spent for Bill Clinton’s first inaugural in 1993.

Yeah, you know, throughout history, not all presidents have made such a lavish event out of the inauguration. Thomas Jefferson, when he was able to defeat the wealthy Federalist Party in what he deemed the Revolution of 1800 in his election, quite simply just put on a sport coat, walked over to the Senate chamber and gave his inaugural address, then walked back to the White House.


I mean, you know, this — when we’re relying on private sources, especially private sources that have business pending before the next administration, to pay for these events, we just have to be careful. I mean, there’s red flags galore here. These funders want something in return. And by the way, most of these funders also were bundlers for the Obama campaign itself. So they’ve not only just paid for the inauguration and all the parties that we’re seeing going around Capitol Hill now, they also provided a bulk of the money that got Obama elected president in the first place. So it’s just something that we should be very cautious about.


You know, the inauguration really should be a government function paid for by public dollars. And it should not be this last opportunity for the very wealthy to throw money at the feet of the President. You know, this is something that should be more a public event.

Craig Holman, I want to thank you for being with us, joining us from Public Citizen here in Washington, D.C. And we’re going to end back with Alice Walker, Pulitzer Prize-winning author, has come to Washington to be a part of this remarkable event.


So you have the small number of people who are spending or gathering millions, and you have the millions of people who are newly involved in politics who believe this is the dawn of a new era. Just the title of your book, We Are the Ones We Have Been Waiting for. In this last thirty seconds — though, Alice, I’m very excited you’ll be joining us for the three-hour special broadcast we’re doing live of the inauguration — your thoughts of who wins out?

Well, I think we are learning our lessons, and one of them now is to realize that we can do these things ourselves. We don’t really need Wall Street. I know there are people who think that that’s impossible, but I don’t, because I’ve never had Wall Street, myself. So I think that if we have faith in the country and in all of the people coming together and putting in their monies, we can have these wonderful celebrations without putting a mortgage on ourselves.

Alice Walker, thanks for being with us. And for those stations that will not be running our live coverage on radio or television, you can go to our website at democracynow.org. We’re covering the inauguration live. 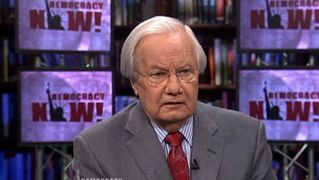