Harry Belafonte: Obama Presidency “An Opportunity to Force Our Voice in Decision-Making Process”

More than 80 gala events took place across Washington, D.C. on Wednesday to celebrate the inauguration of President Obama. One of them was the Peace Ball, sponsored by Busboys and Poets and the Smithsonian National Postal Museum. The highlight of the night was special guest host, the legendary singer, actor and humanitarian, Harry Belafonte. We air his full remarks. [includes rush transcript]

StoryJul 22, 2015“Between the World and Me”: Ta-Nehisi Coates Extended Interview on Being Black in America

AMY GOODMAN: Soon after the inauguration ceremony, President and Laura Bush were flown out by helicopter from the capital to Andrews Air Force Base, where they then flew to Midland, Texas. There, greeted by a crowd, President Bush said, “The presidency was a joyous experience, but as great as it was, nothing compares with Texas at sunset.” He went on to say, “Tonight I have the privilege of saying six words that I have been waiting to say for a while: it is good to be home.”


Last night, President Barack Obama and First Lady Michelle Obama attended ten official balls to celebrate the inauguration. More than [eighty] gala events took place across the city. One of them was the Peace Ball. It was sponsored by Busboys and Poets, which is a restaurant, a series of restaurants here in [Washington], that come from the Langston Hughes poem. It was also sponsored by the Smithsonian National Postal Museum. There were special appearances by comedian Dick Gregory, author Alice Walker, playwright Eve Ensler and a number of others, along with musical performances by Joan Baez and Michael Franti & Spearhead, and many more.


But the highlight of the night was the special guest host, Harry Belafonte. This is what the legendary singer, actor, humanitarian had to say hours after President Obama was sworn in, becoming the first African American president in US history.


HARRY BELAFONTE: Thank you. I’d like to just take a few moments to, first of all, pay respect [inaudible] men and women who have pulled together to make this evening a reality. I want to thank Andy, whom you’ve just heard, for giving us the resources to be able to afford this moment. I’d also like to thank the Smithsonian Institute and the Postal Museum for giving us the opportunity to access this incredible facility so that we could all come together in a place that is historically connected to communication, to give us an opportunity to reacquaint ourselves with one another, to celebrate the victory that has been achieved, and to once again ground ourselves in the commitment and the belief that for Barack Obama to achieve the success that his administration should achieve, it will be deeply rooted in what we do, we, who are here gathered, and the people of America. It is an opportunity for us to force our voices into the mainstream of the decision-making process.


We have to do exactly the same thing with Barack Obama. If he fails, it is because we have failed. And if we succeed, there is no question that he will succeed.


For a long time, the progressive movement has been maligned, denounced, vilified by those who not only stole the power of the people in this nation, but sought to move it eternally into a place of oppression. Well, they’re gone. But for what it is worth, I’d like to counsel you that their absence is a very brief one. At this moment, they are working tenaciously not only to understand what happened, that they should have lost their power, but how to regain it. It is up to us to be proud of who we are, proud of being liberals, proud of being progressives, proud of being gay, proud of being black, proud of being women, proud of being workers, proud of being young, and know that we can shape the future. Each and every one of us has that task.


And as I said in the program — as I wrote in the programs that have been distributed this evening, the last thing Dr. King ever said to me before he was assassinated was when we stood in a room and he reflected on the state of the nation. He looked at the war in Vietnam. He looked at the sluggish economy. He looked at the pain and the anger and the rage that existed in America on the issues of race. And he said rather solemnly, “Harry, I believe we are integrating into a burning house.” And when I asked him what would he have us do, if that be his thought, he said, “We are just going to have to become firemen.”


Thanks to every one of you for coming. And I hope we meet with great consistency until this game is the way we want it played. Thank you very much, and good night.


VERNA AVERY-BROWN: Mr. Belafonte, from the bottom of my heart, I want to thank you on behalf of everyone in this room for your tireless work, your dedication, your deep pockets, your commitment to the cause of peace and justice, for we know that without your contribution, this day might never have happened. Thank you for your service.


HARRY BELAFONTE: I know that we’ve been keeping it a bit of a secret, but I’ve got to tell you, I shouldn’t be thanked. I’m having the greatest time of my life, and I love making mischief. Take care.


Also speaking at last night’s Peace Ball was the legendary comedian Dick Gregory. This is how he ended his address.


DICK GREGORY: So, as we move through this new piece of rhythm, understand one thing, that when you understand the kindness — I wish tonight I could leave and fly to Mississippi and Louisiana and Alabama and meet with the Ku Klux Klan nigger-hating, Jew-bashing, gay-bashing thugs, and I’d say one thing to ’em: I made a mistake with you. You’re the filth of the earth, but you knew something that nobody in the peace movement knew, nobody at General Motors, nobody at Harvard, Yale. You knew. And because you knew it, you blew up my churches, you killed white folks that loved us, you killed black folks, you killed children, and I didn’t know you was doing it, because you was smart enough to know if you ever give them black folks the vote, they’ll be in the White House. They knew that, and you didn’t know it. I love you. God bless you.

AMY GOODMAN: That was legendary comedian Dick Gregory speaking at the Peace Ball that was sponsored by the Postal Museum, part of the Smithsonian Institute, and Busboys and Poets, a series of restaurants and watering holes for the peace and justice community in Washington, D.C. 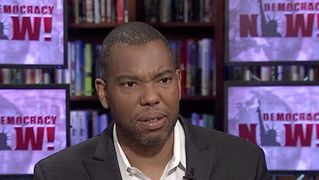 “Between the World and Me”: Ta-Nehisi Coates Extended Interview on Being Black in America