The family of murdered abortion provider Dr. George Tiller has announced the permanent closure of his Wichita, Kansas clinic, eliminating one of the few medical practices in the country that performed late-term abortions. We speak with a close friend of Dr. Tiller’s, Dr. Warren Hern, who is one of the last doctors in the country to perform late-term abortions. [includes rush transcript]

AMY GOODMAN: The family of Dr. George Tiller announced Tuesday that his Wichita clinic will be permanently closed, eliminating one of the few medical practices in the country that performed later-term abortions.


In a statement, Dr. Tiller’s family said, quote, “We are proud of the service and courage shown by our husband and father and know that women’s health care needs have been met because of his dedication and service. That is a legacy that will never die. The family will honor Dr. Tiller’s memory through private charitable activities,” they said.


Dr. Tiller was murdered ten days ago during Sunday services at his Wichita church. He was sixty-seven years old. More than a thousand people gathered in Wichita for the funeral.


The man charged with killing Dr. Tiller, Scott Roeder, told CNN that the closure of Dr. Tiller’s clinic represents a, quote, “victory for the unborn” and means “no more needles going into babies’ hearts,” he said. Roeder has been charged with first-degree murder. He has also warned that more violent acts are planned against abortion providers around the country. In a phone interview from jail, Roeder told the Associated Press, quote, “I know there are many other similar events planned around the country as long as abortion remains legal,” he said.


On Friday, the Justice Department announced it had launched a federal investigation into Dr. Tiller’s death. Meanwhile, the US Marshals Service announced last week it’s increasing protection for abortion providers across the country.


Among those that has had US marshals assigned to protect them is Dr. Warren Hern, one of the few remaining doctors in the country who perform later-term abortions. This week, he has begun to see some of Dr. Tiller’s patients at his clinic in Boulder, Colorado. Dr. Hern joins us now on the telephone from Boulder.


AMY GOODMAN: First of all, condolences on the loss of Dr. Tiller, who was also your close friend.


DR. WARREN HERN: Yes, Dr, Tiller was a wonderful man. He was a conscientious, courageous and dedicated physician who helped tens of thousands of women and their families. This is an incredibly profound tragedy for Dr. Tiller’s family, who loved him, and he was a wonderful father and grandfather, an exuberant person who loved life and made it better for a lot of other people. So this is a tremendous tragedy.


And the closure of Dr. Tiller’s clinic is the inevitable result of this tragedy. The Tiller family has experienced the pain of this anti-abortion harassment, terrorism and intimidation, violence for decades, and it’s incredibly sad. I respect the family’s decision, and it’s hard for me to see how they could choose any other course.


AMY GOODMAN: Dr. Warren Hern, what about you right now in Boulder, Colorado? Obviously, you feel under siege. You have US marshals there around you?


DR. WARREN HERN: Oh, I’m under twenty-four-hour armed guard by US federal marshals. The question is why? Why does a doctor who’s simply helping women have to be under armed guard to protect the doctors from being assassinated by these fanatics? This is outrageous. And there aren’t enough resources to protect every single doctor. I mean, this is — and I’m very grateful for the federal government’s response to my situation and to protect me and my family, but my family is terrified. We can’t — this can’t go on. There aren’t enough resources, manpower, money to protect every single doctor twenty-four hours a day. That is ridiculous. Just as in the '60s, you couldn't put federal marshals and federal troops around every single black person in the country. We have to have some changes in attitude.


I think that the President of the United States has to go on — address the nation — this is a crisis, this is a serious, serious crisis —- and make a clear statement that hasn’t been made before by any president of the United States, that women have the right to have a safe abortion; that safe abortion is a fundamental component of women’s healthcare in this country; that doctors should not have to fear for their lives to help women; that the anti-abortion violence and terrorism has to stop, it will not be tolerated; that the people that threaten doctors and threaten women and threaten the clinic workers are terrorists, and they will be brought to justice, and they may not do these things; that the anti-abortion fanatics need to shut up and go home and leave other people alone.


You know, if they don’t like abortion, don’t have one. I mean, it’s just outrageous. This is a witch hunt atmosphere. This is an era of persecution. This is just intolerable.


AMY GOODMAN: Dr. Warren Hern, your own clinic was shot at, is that right? Was it -—


DR. WARREN HERN: Oh, yeah. In 1988, there were five shots through the front — fired through the front of my office that narrowly missed one of my members of my staff. I had just walked through the room. The lights were on. There were cars in the parking lot. There were people there. This was intended to kill somebody. This is an act of terrorism. And, you know, I offered a $5,000 reward for information leading to the arrest and conviction of people who did this, and the reward stands. I installed bulletproof windows. Why should we have to work behind bulletproof windows to help women? Pediatricians don’t have to do that. Internists don’t have to do that. I mean, this is ridiculous.


AMY GOODMAN: You were also put on a “deadly dozen” list on the web. Can you explain what that is?


DR. WARREN HERN: Well, there was a — yeah, there was a — after the first two American doctors were assassinated in 1993, 1994, Dr. David Gunn, Dr. John Britton, and probably the owner of that clinic was assassinated, but we don’t have firm information about that, but the Catholic priest who made a statement declaring that killing doctors who do abortion justifiable homicide organized a group, and a bunch of people signed his petition that agreed with him. And one of them was a guy named Paul Hill, who then assassinated Dr. Britton and his bodyguard.


And this same group of people organized a group called the American Coalition of Life Activists, so-called, and on January 22nd, 1995, they had a press conference in Virginia and announced their hit list of the first thirteen doctors they wanted eliminated. You know, the Mafia has the decency to keep its hit list private. You know, the Mafia is a decent, upstanding, respectable civic organization compared to the anti-abortion movement in this country. The anti-abortion movement in this country is the face of fascism in America.


DR. WARREN HERN: And they announced this hit list, and I was put under federal protection, along with Dr. Tiller, who was also on this list. The Republican Congress removed the appropriations for this, pulled the money support for this whole thing. The federal protection was dropped.


AMY GOODMAN: Dr. Hern, has anyone reached out to you from the anti-abortion movement, like the Right to Life Committee?


DR. WARREN HERN: I have nothing -— I have no time to talk to these people. They have been trying to get us killed for decades. Their statements that they’re dismayed about Dr. Tiller’s assassination is hypocritical nonsense. These people got exactly what they wanted. They wanted Dr. Tiller dead. They wanted Dr. Tiller’s clinic closed. And they want the rest of us killed. They have made that very clear. So when they make a statement about this — you know, they have gone around demonizing doctors, vilifying doctors, all of us, in the newspapers and speeches and bloody posters, you know, calling us murderers and baby killers and so forth. And Randall Terry is unrepentant. He goes and calls Dr. Tiller a mass murderer. I mean, it’s outrageous. These people, they’ve condemned — people like Dr. James Dobson, who pretends to be a minister, who goes on national radio and vilifies Dr. Tiller and me and other people, I mean, this is just crocodile tears. This is nonsense. These people are hypocrites, and they are dangerous terrorists.


AMY GOODMAN: Dr. Warren Hern, we’re going to ask you to wait for one minute. We’re going to go to a break. Then we’re going to come back, and we’re also going to speak with a genetic counselor who’s a critic of her own organization for not issuing a condemnation of the murder of Dr. Tiller.


AMY GOODMAN: We’re also going to hear from Congress members. Yesterday, the House of Representatives passed a resolution condemning Dr. Tiller’s death. This is Democracy Now! Back in a minute.


AMY GOODMAN: Our guest today is Dr. Warren Hern, speaking to us from Boulder, Colorado. In 1988, his clinic was shot at a number of times. In 2001, he wrote in a newspaper column, after Dr. Barnett Slepian was killed, Upstate New York, through his kitchen window, Dr. Hern wrote, “Will I get to live out my life? Who’s next?” Dr. Hern, why do you continue under this level of threat?


Ronald Reagan tried to make abortion a political crime against the state. And it was staggering. He was brought into office with the active and fervent support of anti-abortion fanatics. And the Republican Party has exploited that movement for thirty-five years to get power. And unfortunately, one of the incredibly terrible results of that was visited upon us, was the administration of George W. Bush, who was the emissary to the anti-abortion groups for his father, when he was president. But this is — right now, performing an abortion is a political act in this country. And why should that have to be true? But that’s what it is. 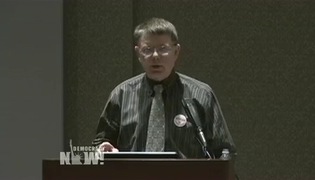