A new overview of research on global warming has found climate change is happening faster and on a broader scale than scientists projected in 2007. The new findings come in a week where the issue of global warming is at the fore with a one-day UN summit on climate change and the G-20 in Pittsburgh. We speak with the Nobel Peace Prize-winning Kenyan environmentalist Wangari Maathai, who was chosen to speak on behalf of international civil society at the UN summit. [includes rush transcript]

Well, we now want to talk about, a new overview of research on global warming has found climate change is happening faster and on a broader scale than scientists projected in 2007. The report, which was released Thursday by the United Nations Environment Program, aims to update predictions issued by the UN Intergovernmental Panel on Climate Change two years ago. It concludes evidence of human-generated global warming in the last half-century is, quote, “unequivocal” and would change the planet dramatically by the end of the century, unless greenhouse gas emissions drop sharply by 2050.


The new findings come in a week where the issue of global warming is at the fore. On Tuesday, world leaders gathered in New York for a one-day UN summit on climate change. And the issue will also be on the agenda today at the G-20 summit in Pittsburgh. The efforts all lead up to the major climate summit in Copenhagen in December to update the 1997 Kyoto Protocol.


Among those who spoke at the United Nations this week was the Nobel Peace Prize-winning Kenyan environmentalist Wangari Maathai. She was chosen to speak on behalf of international civil society. In her address, she called global warming the “challenge of all time.”


WANGARI MAATHAI: Unlike delegations and negotiators, Your Excellencies have the power to turn this around in Copenhagen. There is no time to lose. This is the challenge of all time. Addressing it will take collective political will. No part of the world is immune. We are all in this together, irrespective of our level of contribution to the problem. Business as usual for any one country would be a tragedy.

JUAN GONZALEZ: Well, for more on climate change, Wangari Maathai joins us today in our firehouse studio. She’s a Kenyan environmentalist, lawmaker and civil society activist. In 1977, she spearheaded the struggle against state-backed deforestation in Kenya and founded the Green Belt Movement, which has planted some 45 million trees in the country. She’s also been an outspoken advocate for women’s rights and democratic development, and in 2002 she was elected to the Kenyan Parliament. For her work, she was awarded the Nobel Peace Prize in 2004. She is the author of several books; her latest is The Challenge for Africa.


I want to welcome you to Democracy Now!


WANGARI MAATHAI: Thank you very much.


JUAN GONZALEZ: What was your reception like at the United Nations, and how do you feel your message was received?


WANGARI MAATHAI: Well, as you said, it was a great honor to speak on behalf of the people of the civil society. And the reception was very good. In a way, I was — the people were trying to say, well, it’s the leaders who have the responsibility to agree. And based on the science that we have now been given, the leaders must make a commitment for an agreement that is going to replace the Kyoto Protocol and that is going to make sure that we don’t continue emitting more gases than we can take.


JUAN GONZALEZ: And you must have, obviously, been watching what is happening in the United States with the Congress here and the efforts to finally tackle climate change here by the Congress. The House of Representatives has passed a bill, but the Senate still must pass a bill. What do you see the Obama administration and the United States Congress, their role on the world stage on this issue?


WANGARI MAATHAI: Well, I think the world is very encouraged. We are definitely very happy that the United States of America is on board this time. I know that, in Kyoto, they did not support, and they never signed the Kyoto Protocol, and as a result, we didn’t go very far. So we are very encouraged.


We are hoping that the American people will call their senators and convince them that there is no time to waste and that it is very important for the United States to provide the leadership, because, besides the fact that the United States of America is the greatest contributor to the greenhouse gases per capita, it is the world leader. And if she is committed, if she comes forward, then the rest of the world is going to come forward.


And we saw that in the United Nations General Assembly on Tuesday, and it continues. The leaders who are talking are really committed, and I was happy to see how China responded, how Japan responded. President Obama was very committed, but there were no specific data, but I know that is not coming until we approach Copenhagen.


JUAN GONZALEZ: Well, I want to get your response to some of what President Obama had to say about climate change in his address to the UN on Tuesday.


PRESIDENT BARACK OBAMA: It is true that for too many years mankind has been slow to respond or even recognize the magnitude of the climate threat. It is true of my own country, as well. We recognize that. But this is a new day. It is a new era. And I am proud to say the United States has done more to promote clean energy and reduce carbon pollution in the last eight months than at any other time in our history.


JUAN GONZALEZ: That was President Obama. Your sense, that last statement that he made, is that accurate? In the last eight months the United States has done more than its whole history?


WANGARI MAATHAI: Well, I’m not sure. I don’t know. I do not have the data. He must know. But what was significant is for him to admit that, indeed, the United States now is not going to use science as an excuse and is not going to say that perhaps it is not human-induced greenhouse gases that are causing the trouble. And that has been very significant, because that was the major excuse in the past. And we hope that this will influence the senators to agree that, indeed, we can no longer shovel this issue aside.


And I would like to say this: if the more than 4,000 scientists who have been working on this issue are wrong, this is one issue that we cannot experiment with. We cannot wait until the seas rise, the rivers dry up, and our people are dying and migrating and running away. We cannot wait to see more fires, such as we are seeing in California, erratic fires. We cannot wait to see the kind of floods that we see in Bangladesh, that we see in West Africa. We are already seeing islands that are literally drowning. So, let us not experiment with our lives and that of our children.


JUAN GONZALEZ: And in the upcoming gathering in Copenhagen, obviously, will be crucial to any efforts at slowing down climate change or reversing it. What do you feel are the main issues that not only the rest of — the developing world, but the countries of the advanced West will have to deal with? Obviously, there’s the issue of whether there will be actual agreed-on goals for reductions and emissions, but what are the other issues that you think are critical?


WANGARI MAATHAI: One of the issues that we have been following up is the issue of forests. Scientists tell us that 20 percent of the greenhouse gases are coming from deforestation and forest degradation. And we think that, therefore, forests should be made part of the solution. They were set aside in Kyoto, and the governments said they will talk about it later. They never did, partly because the United States was not on board. So we hope that the forests will be on board.


I am quite sure that we will come to an agreement of some sort. The measure of commitment will be how much they will be willing to cap, to reduce the emissions, and the measures they will take to ensure that developing countries and upcoming economies are willing also to play their part.


And I’m hoping that, especially in countries like — in African countries, that our leaders will really seriously commit — we have a huge forest in Africa, the Congo forest, and I happen to be the goodwill ambassador for that forest — to really encourage African governments not to think that it should only be protected by the countries that are within the Congo. This is an issue that is important for the entire region, but also for the whole world, because these — the forests in Amazonia, the Amazonian forest, the Congo, and the forests in Southeast Asia are extremely important for global climate.


JUAN GONZALEZ: You’ve even made the argument that preserving and expanding those forests creates jobs for the developing world. How so?


WANGARI MAATHAI: Oh, precisely. You know, the Green Belt Movement has championed the tree planting, and I can say with confidence that you can actually create millions of jobs of young people planting trees, protecting forests, and rehabilitating degraded forest. It is something that can really be good for the economy. So, the talk about green jobs, it’s not just about solar, wind and other high-level technologies. It’s also physical, digging holes and planting trees and making sure that they survive.


JUAN GONZALEZ: And also, I’d like to ask you about how the election of President Obama — what kind of impact it has had, not only in your country, obviously, but throughout all of Africa.


WANGARI MAATHAI: Well, I think President Obama has been a great inspiration to Africa. As you know, Africa has been bashed for so long, and she has found it very difficult, especially in the last fifty years or so, to really give good governance examples in Africa. And so, for the election of Obama, this is a real challenge, so that Africans can begin to see themselves differently and reflect themselves differently. And I know in Kenya, for example, he is a great inspiration to the youth. And I’m sure, throughout Africa, people see him as a new era for Africa.


JUAN GONZALEZ: Well, I want to thank you very much for spending some time with us, Wangari Maathai, Kenyan environmentalist and founder of the Green Belt Movement. She is the 2004 Nobel Peace Prize laureate. Her latest book is The Challenge for Africa. 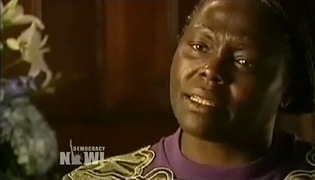