AMY GOODMAN: A NATO convoy came under assault Thursday while carrying supplies through Pakistan to Afghanistan in a rare ambush inside Karachi. The convoy was attacked with guns and grenades on a main highway on the outskirts of the city. About 80 percent of the supplies for American and coalition forces in Afghanistan flow through Pakistan. The New York Times reports militants have repeatedly attacked supply lines passing through Pakistan’s northwest, forcing the coalition to establish new supply routes through Central Asia, but an attack in Karachi is unusual.


Quratulain Bakhteari is the founding director of the Institute for Development Studies and Practices. She joins me here from Pakistan, where she is returning in the next few days.


Where do you live in Pakistan? And welcome.

QURATULAIN BAKHTEARI: Yeah, thank you very much. My home is in Karachi.

AMY GOODMAN: The level of rising militancy — if you could talk about what is happening right now in Pakistan and what you feel the role of the United States does in Pakistan.

QURATULAIN BAKHTEARI: I’ll try to give as much as I know about it and I understand it. The level of growing gap between rich and poor is becoming so sharp, and it is so — the people, the general, ordinary people of Pakistan, it’s now difficult for an average person to educate his children or to have any medical help or have a decent or dignified life. This issue has been — I think has been captured in the name of religion of Taliban.


The majority of the children who are not in school, the mother gives them a very easy way into so-called education with food and all facilities. But the regular schools are so few, not delivering what they’re supposed to deliver, and the children coming out of those schools have not really any future or options for a decent or dignified livelihood. All these things put together is giving this — creating this situation.

AMY GOODMAN: Can you talk about the effect of, for example, the US drone attacks in Pakistan?

QURATULAIN BAKHTEARI: Yeah, those attacks is really very disturbing and very painful. And I feel that there should be another strategy, if it has to be, of diplomacy, of discussion. If you want to kill one person, but you are killing ten or fifteen innocent ones, it is really not making sense to the people of Pakistan.

AMY GOODMAN: And what does that — what happens then?

QURATULAIN BAKHTEARI: It creates a lot of hatred or more confrontation with US people and the country.

AMY GOODMAN: What about women and the effect on women?

QURATULAIN BAKHTEARI: Yeah, women are — as we all know, women and children are the worst sufferers in this situation. They do not know that what’s going to come, because they can’t run from the house. They are there in the homes where the drones attacks are going to take place. They are using this whole situation as offered as shields, and there is no backup support for the refugee women who wants to get out of the situation. There is no program for that. I think there should be a more holistic approach to the fallout effect of all this struggle that is going on.

AMY GOODMAN: Can you talk about what you’re doing, the IDSP?

QURATULAIN BAKHTEARI: We’re looking at the whole situation. I have been working now for thirty years in Pakistan at the grassroots level. And ever since we were sensing this — I was sensing this situation, because of the difference between the education and livelihood opportunities for the majority population of Pakistan and for the few — everything is provided for the few, but what about the rest of the country, the young people?


Pakistan is a country with the most very fast-growing young population. Sixty percent of its population is between fifteen and thirty-five years, and we have no program for them. We have no direction set for them. It is all trial and error. Some people get somewhere, somehow, but there is no systematic organized program for the young people.


In the IDSP, in our institute, we reach out to these people and give options to them, who have missed out or who did not make in the school system or education system or are unable to get into the job market. We bring them in, and we give them — they go through courses on community development, on self-improvement, on citizenship, on their rights. And they then go out. Most of them get jobs, or they start their own community development projects across the country.

QURATULAIN BAKHTEARI: Not like as if you know who’s suicide bomber or not. You don’t come to know that that way, but not so directly. I don’t think you can say bomber, unless they’re there to blow you up.

AMY GOODMAN: But the sense of who you could identify, and do you feel that that is increasing?

QURATULAIN BAKHTEARI: Yeah. You see, that will increase, because, you see, a young boy, a man, who has seen his family finished and who has seen everybody gone, what else he has to live for? This will increase. There is nothing left for the people to live for if their near and dear ones are gone. They want to get back to the killer.

AMY GOODMAN: The billions that the US is giving to Pakistan, where is it going?

QURATULAIN BAKHTEARI: I don’t know. US should know where it’s going. They should monitor their money. But I think it should go to the people; to the education; to develop the civil society; to help out people create their own local-level institutions; to recreate the closed spaces of reflections, of dialogue, of bringing people out of fear and mistrust. That is area where the money should be going, not more to the same people whom US has tested for so long. And the money just lies with the rich and powerful; it doesn’t trickle down. And US doesn’t monitor it well.

AMY GOODMAN: I want to thank you very much for being with us, Quratulain Bakhteari, founding director of the Institute for Development Studies and Practices, joining us here in Park City. She has come to the Sundance Film Festival as one of the social entrepreneurs, a program which we’ll talk about later in the broadcast. 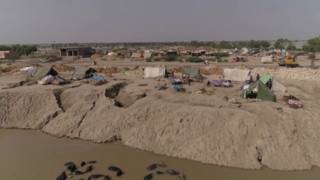