The jailed Chinese human rights activist and writer Liu Xiaobo has been awarded this year’s Nobel Peace Prize for “his long and non-violent struggle for fundamental human rights.” Liu was sentenced to eleven years in prison last year after spearheading a petition calling for freedom of assembly, expression and religion in China. [includes rush transcript]

JUAN GONZALEZ: The jailed Chinese human rights activist and writer Liu Xiaobo has been awarded this year’s Nobel Peace Prize. The announcement was made earlier today in Oslo.

THORBJØRN JAGLAND: For over two decades, Liu Xiaobo has been a strong spokesman for the application of fundamental human rights also in China. He took part in the Tiananmen protests in 1989. He was a leading author behind Charter 08, the manifesto of such rights in China, which was published on the sixtieth anniversary of the United Nations’ Universal Declaration of Human Rights. The following year, Liu was sentenced to eleven years in prison and two years’ deprivation of political rights for “inciting subversion of state power.” Liu has constantly maintained that the sentence violates both China’s own constitution and fundamental human rights.

MINKY WORDEN: Thanks very much.

AMY GOODMAN: Well, tell us about who this Chinese dissident is and the significance of him winning the Nobel Peace Prize today.

MINKY WORDEN: Well, it’s a very big day for people in China, because in recognizing Liu Xiaobo, the Nobel Committee has decided to highlight the concerns for the rule of law, democracy and human rights, that Liu Xiaobo has fought for for the last twenty years.

A little bit about him. He’s a very modest and pragmatic academic and writer. He was the head of PEN in China. And he has — his work over the last twenty years has been characterized by an unflinching commitment to reform in China. And that’s not a very easy thing to do. He probably could have left China at any point in the last twenty years, decided not to. He’s cycled in and out of the Chinese prison system in punishment for his views. And I should be very clear: he’s in prison for — not for any action, but really for peaceful criticism and advocacy for reform within China. So this is a man who is not only very deserving of the Nobel Prize — and this is the first one ever for China, that China has won — but he’s also someone who represents the aspirations of a large number of the 1.2 billion people in China. So it’s really a great day for human rights, and it’s a great day for the people of China.

JUAN GONZALEZ: Now, he’s also a signer of this Charter 08 that has irked the Chinese government to no end. Could you talk about that and what the charter is?

MINKY WORDEN: Charter 08 is modeled on Charter 77, which was an important manifesto in the transition in eastern Europe. And they very conscious — the signers and designers of Charter 08 did a very brave thing. They very consciously designed this document so that it would have great appeal to the mass of Chinese people who are concerned about corruption, who are concerned about the rule of law, and who know that they are not able to exercise basic rights and freedoms. It’s actually a very modest document. It calls for such things as an independent judiciary. But when you don’t have these things in China, it’s a very radical document in its way.

After the 303 signatories — and all of them have been called in for questioning and threatened in a very thuggish way — after the Charter 08 was made public, Liu Xiaobo really became the scapegoat. And in China, there’s an expression, “Kill the chickens to scare the monkeys.” So you kill a chicken to scare a monkey. They were definitely trying to make — the Chinese government was definitely trying to make an example of him to really send a message that advocating for reform in China was not acceptable.

MINKY WORDEN: Well, I think it’s also — the Chinese government probably can claim some credit for Liu Xiaobo being awarded the prize, because the thuggish threats that government officials made publicly and privately to the Norwegian government and the Nobel Committee possibly contributed to Liu Xiaobo getting the prize. So we do have the Chinese government to thank for this, because they both locked him up for eleven years to make an example of him and then they threatened an international body if it decided to award it to him.

JUAN GONZALEZ: Well, interestingly, just the day before this announcement, the New York Times had a front-page article about the — I guess they were getting leaked information that he was likely to get the award. But they gave prominent play to critics of Liu Xiaobo who say that he hasn’t been radical enough in his critique of the Chinese government.

MINKY WORDEN: Well, as I said, he is a pragmatic and modest guy. He is not a radical. This is not someone who’s unfurling banners from the Great Wall of China. This is someone who has worked doggedly and in an extremely pragmatic way for more than twenty years for his goal, which is reform in China. I think you can — you have the Chinese government to thank for the fractured nature of the overseas Chinese democracy movement. The government has forced many articulate supporters of democracy out of the country since 1989. And it is hard. It’s called united front tactics, divide and conquer. And I think — but there’s no question that if the overseas Chinese community and the human rights community has very much been behind Liu Xiaobo’s getting this honor. And again, it’s not for Liu Xiaobo. This is really an honor for the people of China. I’m sure if he was here today, that’s exactly what he would say.

KWAME ANTHONY APPIAH He’s been condemned to prison for eleven years for seven published sentences, sentences — 224 Chinese characters. In the official verdict, the Beijing court cited the passages that they said were subversive. Some of them aren’t full sentences; some of them are just phrases. And others are the titles of articles that he’s written. Two of those sentences come from Charter 08, a manifesto calling for democratic reforms in China, which he helped to write and which has been signed by hundreds of brave Chinese men and women. And the other five sentences are sentences that he posted on the internet. So today we’re going to read all those seven subversive sentences. And we ask all of you here and anyone who hears this appeal to join us in our campaign. And I want to end by saying particularly to Liu Xiaobo himself, “Old friend, we will not forget you. We will not rest until you are free.”

A.M. HOMES: From Liu Xiaobo’s 2006 articles — article “The Many Aspects of CPC Dictatorship” — the CPC is the Communist Party of China: “Thus, all of the tricks used by the Communist Party of China are stop-gap measures for the dictators to preserve the last phase of their power and will not be able to support for long this dictatorial edifice that is already showing countless cracks.”

EDWARD ALBEE: According to the Beijing Number One Intermediate People’s Court, one of Liu Xiaobo’s offending passages is from his 2006 article, “The Negative Effects of the Rise of Dictatorship on World Democratization.” In its verdict, however, the court did not actually quote any passages from this article.

JESSICA HAGEDORN: From Liu Xiaobo’s the 2005 article “The CPC’s Dictatorial Patriotism” — thank you. “The official patriotism advocated by the CPC dictatorship is a fallacious system of ‘substituting the party for the country.’ The essence of this patriotism is to demand that the people love the dictatorship, the one-party rule, and the dictators. It usurps patriotism in order to inflict disasters on the nation and calamities on the people.”

VICTORIA REDEL: From Liu Xiaobo’s 2007 article “Further Questions about Child Slavery in China’s Kilns”: “Since the Communist Party of China took power, generations of CPC dictators have cared most about their own power and least about human life.”

DON DeLILLO: From Liu Xiaobo’s 2006 article, “Can It Be that the Chinese People Deserve Only ‘Party-Led Democracy’?”: “For the emergence of a free China, placing hope in the ruler of a ‘New Deal’ is an idea far worse than placing hope in the continuous expansion of the 'new force' among the people.”

HONOR MOORE: From Charter 08, the December 10th, 2008 declaration calling for political reforms, greater human rights and an end to one-party rule in China: “One-party monopolization of ruling privileges should be abolished.”

E.L. DOCTOROW: Also from Charter 08: “[We need] to establish China’s federal republic under the structure of democracy and constitutionalism.”

MINKY WORDEN: Well, the greatest thing about this award is that ordinary Chinese people will be able to go on the internet, and they’ll be encouraged to go on the internet to read about Charter 08 and to read about the — why Chinese people should have democracy, human rights, rule of law, freedom of expression, freedom of association. And I think Chinese leaders are going to have to account, particularly the hardliners who put him in jail for such a long time, for why it is that they did this. And I think it might actually give a boost to moderates and reformers in China, and that’s a great thing.

AMY GOODMAN:Minky Worden, we want to thank you very much for being with us, director of global initiatives at Human Rights Watch, editor of the book China’s Great Leap: The Beijing Games and Olympian Human Rights Challenges. Again, the news of the day, the Nobel Committee has just announced that Liu Xiaobo has won the Nobel Peace Prize. 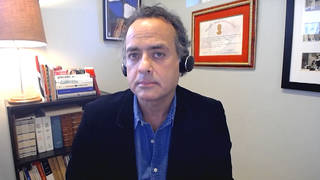