Brazil has reached a new milestone with the election of its first-ever female president. On Sunday, Dilma Rousseff defeated rival José Serra with 55 percent in a runoff vote. Rousseff was outgoing Brazilian President Luiz Inácio Lula da Silva’s chosen successor after serving the last five years as his chief of staff. During the 1960s and 1970s, she was involved in the armed struggle against Brazil’s military dictatorship. She was imprisoned for nearly three years and tortured. Among her pledges, Rousseff vowed to eradicate chronic poverty in Brazil affecting 20 million people. We talk with Michael Fox, an independent journalist and documentary filmmaker based outside Porto Alegre. “She’s a fighter,” Fox says. [includes rush transcript]

AMY GOODMAN: We go south right now to Brazil, which has reached a new milestone with the election of its first-ever female president. On Sunday, Dilma Rousseff defeated rival José Serra with 55 percent in a runoff vote. Rousseff was outgoing Brazilian President Luiz Inácio Lula da Silva’s chosen successor after serving the last five years as his chief of staff. During the '60s and ’70s, she was involved in the armed struggle against Brazil's military dictatorship. She was imprisoned for nearly three years and tortured. Among her other pledges, she also vowed to eradicate chronic poverty in Brazil affecting 20 million people.

For more, we go to Brazil right now to Michael Fox, an independent journalist and documentary filmmaker. He’s based just outside Porto Alegre.

In her acceptance speech, Rousseff marked the historical significance of her win.

PRESIDENT-ELECT DILMA ROUSSEFF: [translated] It’s an immense joy to be here today. I received from millions of male and female Brazilians the most important mission of my life. This fact, beyond my person, it’s a demonstration of the democratic development of our country, because for the first time a woman will rule Brazil.

I want to state my first commitment after the elections: to honor Brazil’s women so that today’s unprecedented result becomes a normal event and may be repeated and enlarged in companies, civil institutions and representative entities of our entire society.

AMY GOODMAN: Dilma Rousseff. Michael Fox, talk about the significance of her win as the first woman president of Brazil.

MICHAEL FOX: It’s really amazing. First, thanks so much, Amy, for having me on. It’s really, really powerful. And you can feel it kind of all across Brazil. I was in São Paulo last month, and groups of women kind of organized to support Dilma. People are really feeling it. And especially in a country like Brazil where you have Carnival, you know, women — you know, it’s what you imagine on the front cover of a newspaper, of a magazine, and this is really much more concrete. This is something saying, “No, you know, we have the power to rule this country and to be in charge.”

AMY GOODMAN: Well, talk about her history. She was a guerrilla against the military dictatorship. What happened to her?

MICHAEL FOX: She was arrested, 1970, as you mentioned. You know, she was locked up for about three years, tortured. Afterwards, she moved to Porto Alegre, which is — we’re just a couple miles from Porto Alegre right here. She became involved in politics after studying economy — she’s an economist — joined the PT in their local government here, and slowly rose her way up to power.

She is a fighter. And I think that’s one of the reasons why Lula chose her to be his anointed successor, is the fact that she’s really, really powerful. The last five years, she was working as his chief of staff under his government, and she knows how to get things done. And, you know, she had a battle with cancer last year, and it seems like that’s in remission, it’s no problem. So, I think that people are — you know, really believe in this woman to make things happen and also to follow and continue with Lula’s policies. That’s really what she ran on, is continuing Lula’s social policies and international policies, and I think that’s going to be the case.

AMY GOODMAN: And can you talk about what Lula and now Rousseff will be able to accomplish, what he accomplished, the significance of his term ending? The radical labor leader turned president, did he fulfill the change he had promised?

MICHAEL FOX: Did he fulfill the change? That just depends on who you talk to. He fulfilled a lot of change. More than 20 million Brazilians left poverty under his administration, through programs like Bolsa Familia, which gives stipends to families that have their children in school; Minha Causa, Minha Vida, which helps people with subsidized funds to be able to acquire their own new homes. It’s really been massive change here in Brazil. And people believe that, you know, he is the first true Brazilian president.

At the same time, the MST, the Landless Peoples Movement, the Landless Workers Movement, they believe that, you know, he hasn’t followed through with his promises on agrarian reform. And Dilma is probably going to follow down the same road. What has been very important for them has been the agro industry, and that’s part of the reason why Brazil has kind of pushed through the economic downturn here, is with this support and this focus on the agribusiness. So it’s this paradox that you have between supporting the poor, and it’s been really, really powerful — and Dilma, you know, like she said, she’s going to continue with these policies.

One of, I think, the most important things also is to remember that the coalition that she has in government is a coalition of over ten parties, and so it’s not like it’s just the Workers Party that brought her to power. So you have some conservative parties that are in there. But at the same time, that coalition also has a strong majority in both the Congress and the Senate that they won last month. It’s the first time in Brazilian history that they’ve had this type of power in the executive and legislative branches. And so, I think that’s going to mean that Dilma is going to have a lot more support for really beginning to push through some of the policies and legislation she wants.

AMY GOODMAN: Michael Fox, we have to leave it there. Thanks so much for being with us, independent journalist, speaking to us from outside Porto Alegre. 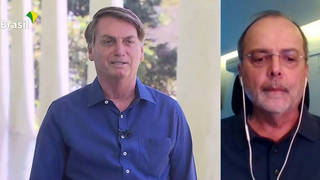