As GOP Appears to Win Extension of Bush-Era Tax Cuts for Wealthy, Rev. Jesse Jackson Calls for “War on Poverty”

The Senate has failed to advance a bill that would have extended the deadline to file for federal unemployment insurance through next year. This leaves some two million unemployed Americans without jobless benefits after this month. The White House, meanwhile, has signaled it’s willing to compromise on Republican demands to preserve the Bush-era tax cuts for the wealthiest Americans. We speak to the Reverend Jesse Jackson, who says describes our current moment as one of “exceptional poverty” and is calling on President Obama to hold a bipartisan meeting on hunger and poverty. [includes rush transcript]

AMY GOODMAN: We turn now to the state of poverty in this country. The Senate failed on Tuesday to advance a bill that would have extended the deadline to file for federal unemployment insurance through next year. This leaves some two million unemployed Americans without jobless benefits after this month.

Meanwhile, President Obama sounded a hopeful note about ending the gridlock on Bush-era tax cuts for the wealthiest Americans. Speaking on Tuesday after a bipartisan meeting on taxes, Obama talked about, quote, “the beginning of a new dialogue.” Despite their differences over ending the tax cuts, he said the two parties had agreed to negotiate a deal in the coming days. The bipartisan meeting comes one day after the President announced a controversial proposal for a two-year freeze on the salaries of some two million federal workers.

Well, my next guest describes our current moment as one of “exceptional poverty” and is calling on President Obama to hold a bipartisan meeting on hunger and poverty. Civil rights leader Reverend Jesse Jackson is the founder of Rainbow/PUSH Coalition. He joins us here in New York.

AMY GOODMAN: There was no videotape of that meeting with the Republican leadership with President Obama yesterday in the White House, but you seem to know what they didn’t talk about.

REV. JESSE JACKSON: Well, what is astonishing is that the tax cuts would amount to more money involved than the stimulus and TARP and Afghan and Iraq combined — almost a trillion dollars in ten years. So you could say we’re in a hole looking for a shovel rather than a rope. In the meantime, they’re not discussing a poverty cut. Now 59 million Americans have no health insurance; that number is rising. Forty-nine million are now in poverty. The highest food stamp allocation, 41 million, ever. And so, while the subsidized wealthy are splurging in their wealth, because they were subsidized, there is a growing body of unemployed people. And these two million Americans cannot get unemployment benefits. They cannot pay their house notes. They cannot keep their children in school. And so, we must use a rope to climb this hole, not another shovel.

REV. JESSE JACKSON: We need a war on poverty. We need to invest in people. Let me look at Detroit for a moment. There are 90,000 vacant homes or abandoned lots in Detroit. We bailed out GM; 60 percent of GM is owned by the U.S. government. The number one market for the Buicks is China. There is not one minority dealership in Detroit. Ford is putting another hundred dealerships in China. So we still do not have a hold on globalized capital, but not globalized human rights, workers’ and womens’ rights. Some of them still want to blame the workers for the crisis that we now we find ourselves in. And, of course, at 49 million in poverty, it has an impact upon healthcare, upon education, upon productivity. You take the 90,000 homes, Amy, for example. If there were a plan for reconstruction, those abandoned homes, where you need weatherization, and you need planers and glazers — put people back to work. We can work our way out of this crisis. We cannot cut our way out. In the Congress, 261 are millionaires, so really a tax cut really is like a conflict of interest.

AMY GOODMAN: ThinkProgress and the Progress Report have documented that there is a growing coalition between the Tea Party-backed conservatives and stalwart progressives, who are coming together to demand cuts to the defense budget, the coalition given further momentum with the co-chairs of President Obama’s deficit reduction commission, released a report that calls for $100 billion in defense cuts.

REV. JESSE JACKSON: Well, between the tax cuts they want — almost a trillion dollars over ten years — the military budget is like sacrosanct. We bail out the banks, but not linked to lending and to reinvestment, and so they’ve been bailed out. The insurance companies, without public option, they, in a sense, have been subsidized, they got more customers — they’ve been bailed out. The Afghan, Iraq war — Mr. Bush admits that it was wrong, a mistake to go into Afghanistan, into Iraq. Not only do we not get an apology, but the cost of lives and honor is involved in this thing and the cost of pure money.

So I would hope that we would take a kind of a Roosevelt look, where we reconstruct banks, not just bail them out, that we need a war on poverty. The growing number of unemployed people — unemployed people. I went to a homeless shelter in San Francisco a few weeks ago, and the people in there were mostly white women, but some people of color, as well. But they work every day, but they can’t afford rent. They’re like working people. And they come at night, and they convene their children on the floor, and they teach them. And there’s a six-month waiting list. Somehow poverty and disparity, these two words do not seem to fit our lexicon anymore.

AMY GOODMAN: Before we end, I wanted to ask you about the WikiLeaks leak with your name. Your name comes up in one of the U.S. embassy cables leaked by WikiLeaks. It’s a cable from the US embassy in Cape Town, South Africa, from August 17, 1990, about Nelson Mandela’s imminent release. The cable relays a briefing with a United Democratic Front lawyer Essa Moosa, and includes a line that reads, quote, “Raising the pending visit of Jesse Jackson, Moosa expressed concern that it would be bad for the struggle if Jackson advocated lifting sanctions upon his return to the U.S.”

REV. JESSE JACKSON: You know, what strikes me about this WikiLeaks is they want to use the leaker as a trophy. But is it true? Were we in fact spied on domestically, as a case in point? We took our lead from ANC as to what next to do. But the thought that, given what happened happened to Dr. King, with the — our government sought to disrupt his credit and destroy him. And you take these kind of leaks and put them in the press, and there will be sources say it’s so. It makes one a bit anxious about the role our government played upon us, those of us who were activists. The good news is that we kept applying sanctions. We did break the back of that level of apartheid. But the WikiLeaks, to me, is not just the leaker. There must — because this is not a one-guy thing. But is it true? It certainly weakens our moral authority in the world.

REV. JESSE JACKSON: Well, we are not visible, as we ought be in that case. Here, right in our hemisphere, we rushed to the aid when the hurricane came, got lots of publicity, but we have not yet released the money that was raised by the donors, and we say it’s because the government was too corrupt. What about some emergency infrastructure? So we’ve gone from hurricane now to cholera, and we seem to not have — it is Katrina expanded, and yet there’s a certain silence of protest about how not effective the movement on stopping the rise of cholera and the disease in Haiti.

AMY GOODMAN: What needs to happen in this Congress before it ends? And we have ten seconds. What do they need to do?

REV. JESSE JACKSON: Extend unemployment benefits and make a commitment to something big, like a war on poverty.

AMY GOODMAN: Reverend Jesse Jackson, thank you very much for being with us. 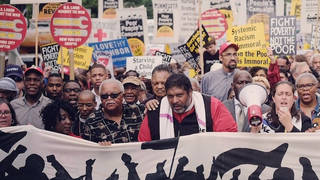