Crowds of students stormed and occupied the office of a University of California, San Diego chancellor for six hours Friday after a noose was found hanging from a bookcase in the main library. The noose is only the latest in a string of incidents over the past few weeks. Protests were initially sparked by an off-campus party last month they called “Compton Cookout” that mocked Black History Month and denigrated African American women. UC San Diego has the smallest percentage of African American students in the nine-campus UC system. The Black Student Union at UC San Diego has declared the campus climate for racial minorities to be in a “state of emergency.” [includes rush transcript]

AMY GOODMAN: We go now to California, where
crowds of students stormed and occupied the office of a University of California, San Diego chancellor for six hours Friday after a noose was found hanging from a bookcase in the main library. The incident prompted angry protests from students across the UC-wide system and denunciations from UC President Mark Yudof and California Governor Arnold Schwarzenegger. The unidentified student who admitted to hanging the noose was suspended.


But racial tensions still run deep at UC San Diego, where the noose is only the latest in a string of incidents over the past few weeks. Protests were initially sparked by an off-campus party last month they called “Compton Cookout” that mocked Black History Month and denigrated African American women.


UC San Diego has the smallest percentage of African American students in the nine-campus UC system. The Black Student Union at UC San Diego has declared the campus climate for racial minorities to be in a, quote, “state of emergency.” The students called on the university to increase its stated commitment to diversity by recruiting more students of color and providing greater support for ethnic studies departments and resource centers for underrepresented students.


For more, I’m joined now in San Diego by the co-chair of the Black Student Union from the University of California, San Diego, Fnann Keflezighi, and Daniel Widener, associate professor of history and faculty director of the African American Studies minor at UC San Diego. He co-authored a letter from the African American faculty expressing their, quote, “disgust at the racist and misogynist events” and calling on the university administration to provide the necessary resources to improve the climate on campus.


I think the most important thing for viewers and listeners to understand is that the students are battling not only a campus climate of intense hostility, that Fnann will also detail, but a tremendous amount of history. California voters have passed a series of racist initiatives, really over the last forty years, opposing fair housing, dismantling affirmative action, criminalizing youth, attempting to criminalize undocumented immigrant populations. So there’s really a social basis for an intense racism that aims to maintain black people as a surplus population to be jailed and Latino people as a disposable population to be kept as a semi-permanent socioeconomic underclass. So, education is a critical part of that. And on a campus where our numbers are almost a statistical anomaly, we face just a tremendous amount of both neglect and active hostility.


AMY GOODMAN: Fnann Keflezighi, co-chair of the UC San Diego Black Student Union, these most recent events — can you start off by explaining what the so-called Compton Cookout was?


FNANN KEFLEZIGHI: So, the Compton Cookout, which was hosted and organized by different UCSD students, was in honor of Black History Month, and it was basically making a mockery of everything that we were celebrating for Black History Month on our campus and allowing students to experience the ghetto and different aspects of the ghetto by dressing a certain way and eating certain food and listening to certain music. But they definitely described what students should wear in a very detailed and dehumanizing and demoralizing way. We were all very shocked to read the description, as well as very — a lot of other students and faculty and staff. A lot of folks thought it was a joke at first, but the party did happen that Monday.


AMY GOODMAN: I’m just amazed as I look at this Facebook invitation that urged women to dress as “ghetto chicks” who, quote, “usually have gold teeth, start fights and drama, and wear cheap clothes.” It said the menu would include chicken and watermelon?


AMY GOODMAN: And then you have —-


DANIEL WIDENER: No, no, no. I just wanted to say that that was really only the first of a string of subsequent incidents, and it’s important for people to understand that those incidents continue and that new ones are coming to light.


We had a student who had trash thrown on her in the residence hall. We’ve had students intimidated in large lecture courses, where you may have four or five hundred students and may have one or two African Americans, at most. We had, of course, the incident that people have heard about of the noose being hung in the library. And we’ve had some off-campus incidents in restaurants and other public spaces.


So, our position, our feeling, is that the climate is worsening for students and that students are expressing tremendous concern about their safety, a fear of attending classes, a fear of being on the campus. And we get word now of the beginnings of a really racist counter-mobilization aimed at repudiating the suggestions, the demands that the students have made for how to implement a better campus climate. So the situation really is polarizing between the people who see these outbreaks of racist hostility as a problem or an embarrassment and people who are prepared to defend them.


AMY GOODMAN: And the fact that UC San Diego has the smallest percentage of African American students in the nine-campus UC system, Fnann, do you think that this has anything to do with what’s going on right now?


FNANN KEFLEZIGHI: Most definitely. The UC president, Mark Yudof, addressed to the chancellor in June that she needed to fix the situation for African American students on the campus, because although the incidents are coming to light now, a lot of incidents like this have happened in the past, and it’s just a very hostile environment for African American students and underrepresented students on an everyday basis in the previous years. So I think that her lack of action to Mark Yudof telling her to take action in June is why we are in the state we are in now, as well as -— the Black Student Union wrote a report called the “Do UC Us?” report in September and talked about —- there was testimonies talking about how bad the climate was for African American students and made recommendations on how to fix that back in September.


AMY GOODMAN: And Professor Widener, what do you think of the administration’s response and what needs to be done right now?


DANIEL WIDENER: Initially, when asked, I called the administration’s response tepid. And I’d like to stand by that statement. I think that the university has recognized that there’s a problem, but it has yet to commit itself fully to implementing the kinds of solutions that have been laid out, not simply by the students in their “Do UC Us?” document, which does have testimony, which does have suggestions, but also a history of reports initiated by Latino faculty, by African American faculty, by multi-ethnic groups of faculty. There was a 2007 yield report aimed at democratizing and diversifying the campus.


So this has been a subject of study, but it’s never been a situation where the university would commit itself to allocating resources, funding students, scholarships for students, outreach and yield, and the kinds of things that would produce a student body, a population, reflective of our state, reflective of the diversity of our state, and where the students would not feel outnumbered. We should not have a situation where every student knows every other student by name. This is not a small liberal arts college. We have 24,000 undergraduates. So I think that the research has been done. The question is whether or not the university has the will to make the choices that will prevent these kinds of incidents in the future and in the present.


AMY GOODMAN: And the significance of, well, this being a decade after a California ballot proposition barred the use of race and ethnicity in admissions decisions, University of California continues to struggle to diversify its campuses. Black and Latino enrollment has plummeted.


DANIEL WIDENER: Yes, I think that it has to be said that the students have launched a battle against the resegregation of higher education. It’s a battle that’s tied to the privatization of higher education, the idea that only those who can afford a top-grade education should receive one, and that those should be the people who are the doctors, the attorneys, the chemists, and the other professional class for the future. And what the students have put on the line is the idea that a sixty— or seventy-year-old African American man could have a doctor who looks like him to talk about prostate cancer with, that a Latino who is accused of a crime could have an attorney who could communicate with her in her defense, that these students are fighting not just for the UC campuses, not just for UC San Diego, but for the future of people of color in this state.


And I think that it’s very important that people throughout the country try to do what they can to mobilize to help us, whether that’s emailing our chancellor, chancellor(at)ucsd.edu, calling her office at (858) 534-3135, or looking at a website that the students have put out called stopracismucsd.wordpress.com. These are all things that people can do immediately now to help us build pressure for change.


AMY GOODMAN: And Fnann, finally, there are major protests planned, is this right, for Thursday?


FNANN KEFLEZIGHI: Thursday is March 4th, which is actually a statewide day of action for educational justice and educational equality. It’s been planned for months now. And so, we definitely think that the situation that’s at hand right now with the campus climate at UCSD ties into March 4th and what March 4th is standing for and what it’s fighting for.


AMY GOODMAN: Well, I want to thank you both for joining us. Professor Widener, Daniel Widener, associate professor of history and faculty director of the African American Studies minor at UC San Diego, and Fnann Keflezighi, co-chair of the UC San Diego Black Student Union, thank you for joining us. 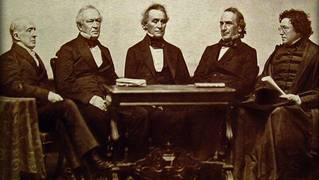