StoryMay 17, 2022David Dayen on the Baby Formula Shortage & Monopolies in the Age of Corporate Power

ANJALI KAMAT: In a historic vote, the House has approved an overhaul of the nation’s healthcare system that expands coverage to more than 30 million uninsured Americans while forcing millions to purchase private health insurance. The House voted 219 to 212 along party lines. Thirty-four Democrats joined Republicans in voting against the bill.


After approving the legislation, the House adopted a package of changes to it by a vote of 220 to 211. That package now goes to the Senate for action as soon as this week. It then goes to President Obama, who would sign it into law in the final step of a bitter legislative battle that began over a year ago.


Speaking at the White House after the vote late Sunday night, President Obama celebrated the victory.


PRESIDENT BARACK OBAMA: Tonight, after nearly 100 years of talk and frustration, after decades of trying and a year of sustained effort and debate, the United States Congress finally declared that America’s workers and America’s families and America’s small businesses deserve the security of knowing that here, in this country, neither illness nor accident should endanger the dreams they’ve worked a lifetime to achieve.

Tonight, at a time when the pundits said it was no longer possible, we rose above the weight of our politics. We pushed back on the undue influence of special interests. We didn’t give in to mistrust or to cynicism or to fear. Instead, we proved that we are still a people capable of doing big things and tackling our biggest challenges. We proved that this government, a government of the people and by the people, still works for the people.

I want to thank every member of Congress who stood up tonight with courage and conviction to make healthcare reform a reality. And I know this wasn’t an easy vote for a lot of people. But it was the right vote. I want to thank Speaker Nancy Pelosi for her extraordinary leadership and Majority Leader Steny Hoyer and Majority Whip Jim Clyburn for their commitment to getting the job done. I want to thank my outstanding Vice President, Joe Biden, and my wonderful Secretary of Health and Human Services, Kathleen Sebelius, for their fantastic work on this issue. I want to thank the many staffers in Congress and my own incredible staff in the White House, who have worked tirelessly over the past year with Americans of all walks of life to forge a reform package finally worthy of the people we were sent here to serve.

And today’s vote answers the dreams of so many who have fought for this reform. To every unsung American who took the time to sit down and write a letter or type out an email hoping your voice would be heard, it has been heard tonight. To the untold numbers who knocked on doors and made phone calls, who organized and mobilized out of a firm conviction that change in this country comes not from the top down, but from the bottom up, let me reaffirm that conviction: this moment is possible because of you.

Most importantly, today’s vote answers the prayers of every American who has hoped deeply for something to be done about a healthcare system that works for insurance companies but not for ordinary people. For most Americans, this debate has never been about abstractions, the fight between right and left, Republican and Democrat. It’s always been about something far more personal. It’s about every American who knows the shock of opening an envelope to see that their premiums just shot up again, when times are already tough enough. It’s about every parent who knows the desperation of trying to cover a child with a chronic illness, only to be told “no” again and again and again. It’s about every small business owner forced to choose between insuring employees and staying open for business. They are why we committed ourselves to this cause.

Now, it probably goes without saying that tonight’s vote will give rise to a frenzy of instant analysis. There will be tallies of Washington winners and losers, predictions about what it means for Democrats and Republicans, for my poll numbers, for my administration. But long after the debate fades away and the prognostication fades away and the dust settles, what will remain standing is not the government-run system some feared or the status quo that serves the interests of the insurance industry, but a healthcare system that incorporates ideas from both parties — a system that works better for the American people.

In the end, what this day represents is another stone laid firmly in the foundation of the American Dream. Tonight we answered the call of history as so many generations of Americans have before us. When faced with crisis, we did not shrink from our challenge; we overcame it. We did not avoid our responsibility; we embraced it. We did not fear our future; we shaped it.

Thank you, God bless you, and may God bless the United States of America.

AMY GOODMAN: President Obama speaking at the White House last night. House Democrats secured the 219 votes, three more than needed for passage, only after last-minute negotiations involving the White House, the House leadership and a group of Democratic opponents of abortion rights led by Congressman Bart Stupak of Michigan. On Sunday afternoon, members of the group announced they would support the legislation after Obama promised to issue an executive order to, quote, “ensure that federal funds are not used for abortion services.”


This is Democracy Now!, democracynow.org, the War and Peace Report. When we come back, we’ll hear from Congress member John Boehner and House Speaker Nancy Pelosi. And then the great writer Arundhati Roy joins us for the rest of the hour. Stay with us.


REP. JOHN BOEHNER: Today we’re standing here looking at a healthcare bill that no one in this body believes is satisfactory. Today we stand here amidst the wreckage of what was once the respect and honor that this House was held in by our fellow citizens. And we all know why it is so: we have failed to listen to America, and we have failed to reflect the will of our constituents. And when we fail to reflect that will, we fail ourselves, and we fail our country.


Look at this bill. Ask yourself, do you really believe that if you like the health plan that you have, that you can keep it? No, you can’t.


In this economy, with this unemployment, with our desperate needs for jobs and economic growth, is this really the time to raise taxes, to create bureaucracies and burden every job creator in our land? The answer is no.


Can you go home and tell your senior citizens that these cuts in Medicare will not limit their access to doctors or further weaken the program instead of strengthening it? No, you cannot.


Can you go home and tell your constituents with confidence that this bill respects the sanctity of all human life and that it won’t allow for taxpayer funding of abortions for the first time in thirty years? No, you cannot.


And look at how this bill was written. Can you say it was done openly, with transparency and accountability, without backroom deals and struck behind closed doors, hidden from the people? Hell no, you can’t!


REP. DAVID OBEY: Both sides would do well to remember the dignity of the House.

ANJALI KAMAT: House Minority Leader John Boehner there. House Speaker Nancy Pelosi spoke next. She made the final statement from the House floor before the vote.


HOUSE SPEAKER NANCY PELOSI: We all know that the present healthcare system and insurance system, health insurance system in our country, is unsustainable. We simply cannot afford it. It doesn’t work for enough people in terms of delivery of service, and it is bankrupting the country with the upward spiral of increasing medical cost.


With this action tonight, with this healthcare reform, 32 million more Americans will have healthcare insurance. And those who have insurance now will be spared being at the mercy of the health insurance industry with their obscene increases in premiums, their rescinding of policies at the time of illness, their cutting off of policies even if you have been fully paying but become sick. The list goes on and on about the healthcare reforms that are in this legislation: insure 32 million more people, make it more affordable for the middle class, end insurance company discrimination on pre-existing conditions, improve care and benefits under Medicare, and extending Medicare’s solvency for almost a decade, creating a healthier America through prevention, through wellness and innovation, create four million jobs in the life of the bill, and doing all of that by saving the taxpayer $1.3 trillion.


And now, I want to just close by saying this. It wouldn’t be possible to talk about healthcare without acknowledging the great leadership of Senator Edward Kennedy, who made healthcare his life’s work. In a letter to President Obama before he passed away — he left a letter to be read after he died — Senator Kennedy wrote that access to healthcare was the great unfinished business of our society. That is, until today.

Arundhati Roy on Obama’s Wars, India and Why Democracy Is “The Biggest Scam in the World”

NEXTArundhati Roy on Obama’s Wars, India and Why Democracy Is “The Biggest Scam in the World” 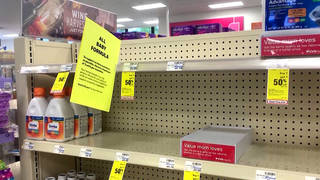