Thousands of students in at least thirty-two states are planning to walk out of classes today as part of the National Day of Action to Defend Public Education. The call for nationwide protests originated in California following last November’s student strikes and building takeovers in response to undergraduate fees rising 32 percent. Budget cuts in California have led to teachers furloughs, canceled classes, and entire academic departments being eliminated. We speak to University of California, Berkeley professor Ananya Roy and Ricardo Gomez, a third-year undergraduate student who started the group Berkeley Students Against the Cuts. [includes rush transcript]

JUAN GONZALEZ: Thousands of students across the country are planning to walk out of classes today as part of the National Day of Action to Defend Public Education. According to the website studentactivism.net, more than 100 actions are planned in thirty-two states. The call for nationwide protests originated in California following last November’s student strikes and building takeovers.

In November, the University of California’s Board of Regents voted to raise undergraduate fees 32 percent next fall. Due to budget cuts in California, teachers have been put on furlough, classes have been cut, and entire academic departments have been eliminated.

A number of student protests have already taken place this week in California. On Wednesday, twenty students occupied a building at Cal State University, Fullerton for five hours. On Monday, five students were arrested in Sacramento outside the office of California Assembly Member Jim Nielson.


VICTOR SANCHEZ: I think the purpose of today’s march, rally, lobby day action, everything, is to make sure that we make a case to the state that education should be a right, not a privilege. We’ve seen our institutions teeter all along the line of privatization, and we can’t take it anymore. I think ultimately we’re here to stand up and have our voices heard, and that’s what we’re here to do.

AMY GOODMAN: Student protests have also been held in recent days across the University of California system to protest a series of recent racist incidents at UC San Diego and UCLA. At UC Berkeley, scores of black students lined up to block the campus’s famous Sather Gate.


Here in New York, walkouts are planned at Hunter College and other schools. A rally is scheduled outside of Governor David Paterson’s Manhattan office.

Some international student protests are also being organized today. Earlier today at the University of Johannesburg in South Africa, police fired water cannons on students who were demanding the government provide free education for the poor. The South African Students Congress called on students to boycott classes at nine campuses today.

Well, we’re joined now by two guests at the University of California, Berkeley. Ananya Roy is a professor of urban studies and international development. She’s part of the Solidarity Alliance. And Ricardo Gomez is a third-year undergraduate student who started the group Berkeley Students Against the Cuts.


Professor Ananya Roy, you have written an open letter to the university community. Can you talk about what is at stake?


But today is also a historic day because it is a day of hope. The last time I was on the show was in November, when we were planning a three-day strike. And that strike was about the pain being inflicted on the UC system, about fee hikes and worker layoffs and faculty furloughs. Well, those issues have not gone away. But today is not a day of fear; it is a day of hope. And that hope is expressed in how this day has become a national, even an international, day to take action to defend public education, from elementary schools to community colleges to students in colleges around the world.


JUAN GONZALEZ: And Ricardo Gomez, your organization has talked about this being a battle against privatization of education. What do you mean?


The different services that we have on our campuses — IT services, bus services, dining services — are facing union busting by administrators. And there are just different things. More corporations are coming onto campus to do research in ways that are — don’t really align with the idea, the values, of public institutions.


AMY GOODMAN: I want to turn to California Governor Arnold Schwarzenegger. At his State of the State address in January, he called for privatizing some of the state’s prisons and funneling the savings into education.

AMY GOODMAN: That’s Governor Schwarzenegger. He also says he understands why students are protesting today. Ananya Roy, what about the role of the Governor and just the idea that there’s not enough money right now?


ANANYA ROY: Well, our theme for today, particularly the rally in Sacramento, is “educate the state.” And I’m glad to see that the Governor has become aware of how California is spending much more on prisons than on its universities.


But second, I think our march today and the various rallies in California are a way of saying “not in our name,” that we reject these various tradeoffs, that the privatization of prisons in order to stop cuts to our system is not a progressive social agenda. We need to unite across social sectors to say that we have to find a way to invest in the collective future of California. And that means thinking about investing, rather than simply thinking about shuffling resources from one set of cuts to another.


ANANYA ROY: Well, the impact is quite immediate. We are seeing students struggling to get into classes, to keep up with those classes. We’re seeing students holding down multiple jobs while they’re trying to get through school. We’re seeing students trying to finish their college education in a shorter amount of time, and yet their inability to get into all of the classes they need makes that more difficult. So we’re really looking at a generation that is facing great frustration, that they graduate from college with a crushing burden of debt, and that faces a general condition of hopelessness.


I think there’s some very important questions here also about whether the University of California system will be able to maintain these twin mandates of access and excellence. We’re clearly seeing an erosion of access. Now, these are not new issues. Students of color have been fighting around these issues for quite awhile in the UC system and more broadly in California, that the doors of the public university have never been open for all. So we see this as a struggle to not only save the university, but to also transform it, to make those issues of access and opportunity, central to the struggle, visible to all.


AMY GOODMAN: Ricardo Gomez, can you describe the protests that will be happening at UC Berkeley and how you’re organizing with others?


And so, I think, really, the message here is that public education is a right and that people will — that we will fight for it in different locales and bring different stakeholders into the fold — teachers, students from K through 12, university students, and just the general public, as well.


JUAN GONZALEZ: And Ricardo Gomez, some people have criticized the sporadic occupations that have also occurred at various campuses across the state. What’s your organization’s perspective on actual civil disobedience or occupations versus just having a protest or walkouts?


RICARDO GOMEZ: I mean, I personally believe in nonviolence, and I think that the issue is how these things are conducted, if they’re conducted in a way that adheres to nonviolence. But I think that’s my personal perspective. And I think that the decision to be nonviolent or the decision to carry out actions in a certain way is a personal decision. I think that, in the past, different struggles have used building occupations and sit-ins in different ways that have been successful and that have really showed solidarity in power, in student power or worker power. And so, I think that those tactics are tactics, and they need to be thought about before they’re done, but I’m not — I personally don’t feel that I’m against any type of tactic as long as it adheres to — it adheres to the values of nonviolence.


I think that when the Wheeler occupation happened on our campus in November, 2,000 students came out in support of that occupation. And there were students who disagreed with it, and there are students who would still disagree with it. But I think if you look at the history of social movments and of successful struggles in the past, you will see that strikes, building occupations, these kinds of things, have worked in the past. And I think that as long as they’re done in the right manner, that they can be really successful.


AMY GOODMAN: Professor Ananya Roy, the makeup of the California student body, at every level — the community colleges, the UC system, Cal State system —- and how it’s changing, and how that relates to, well, Governor Schwarzenegger cutting the Cal Grants, some of them up to $9,700 a year, to help middle— and low-income students pay for college? At first he had proposed the wholesale elimination of the program; now there’s some funding returning. That and other issues, how the California education system, higher education system, is changing?


ANANYA ROY: Well, we are beginning to look at a systematic destruction of the system of public education in California. And I think we’re feeling the effects of this. So, yes, much fewer students are able to join the community college systems, to enter the UC system, not only to be able to afford a college education in California, but to even be able to get into college. The community colleges turned away 40,000 students this year. And, of course, the K-through-12 cuts have a huge impact on whether or not students are able to get into colleges that they deserve to be educated at. So we have seen a horrible slide in California’s position in education in both the country and internationally. California now is forty-ninth out of fifty states in the number of adults with high school education. Its position in terms of the number of adults with college education continues to slip. And this does not bode well for California’s future.


So, if Californians care for nothing else other than economic competitiveness and job creation and economic recovery, then they have to pay attention to these trends. Many of us care for much more. We care about issues of social justice. We care about equality of opportunity. And when one cares about those issues, one has to pay attention to who is able to get into college, whether education has become a privilege for the minority or whether it is a widely held right.


AMY GOODMAN: Well, we will certainly follow these protests today and the whole situation in education in our country. I want to thank you, Professor Ananya Roy, teaching urban studies and international development at UC Berkeley, and Ricardo Gomez, student organizer at UC Berkeley.

Boycott, Divest From, and Sanction Israel?: A Debate on BDS with Omar Barghouti and Rabbi Arthur Waskow

NEXTBoycott, Divest From, and Sanction Israel?: A Debate on BDS with Omar Barghouti and Rabbi Arthur Waskow 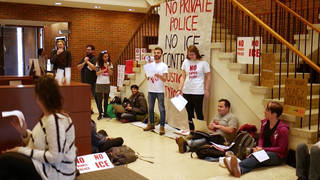