Bolivian Conservationist Calls for Preservation of Madidi Region, One of the Most Biodiverse Areas of World

As Bolivian President Evo Morales is being celebrated internationally for hosting the World Peoples’ Summit on Climate Change and Rights of Mother Earth, some Bolivian environmentalists and conservationists have questioned Morales’ domestic policies. In northern Bolivia, Morales has supported oil exploration and other development inside the Madidi National Park. The region is considered one of the most biodiverse areas on earth. On Thursday, I spoke with Rosa María Ruiz, who has worked in the Madidi region for decades and led efforts for the region to be protected. [includes rush transcript]

AMY GOODMAN: We turn now to the rainforest. As Bolivian President Evo Morales is being celebrated internationally for hosting the World Peoples’ Summit on Climate Change and Rights of Mother Earth, some Bolivian environmentalists and conservationists have questioned Morales’s domestic policies, though they have supported him in his presidency. In northern Bolivia, Morales has supported oil exploration and other development inside the Madidi National Park. The region is considered one of the most biodiverse areas on earth.


Well, I just sat down and spoke with Rosa María Ruiz, who was working in the Madidi region. She’s worked there for decades. She was born in La Paz and has led efforts for the region to be protected.


Eco Bolivia Foundation was attacked ruthlessly by the previous government, by Gonzalo Sánchez de Lozada. They destroyed all of our work, more than twenty-six lodges on the Tuichi River, major lodge on the Beni River, etc., etc., because we were very critical of the destruction that was going on and pushing for conservation in this region, as well as for the generation of and titling of indigenous territories.


AMY GOODMAN: Can you describe this region of northern Bolivia? Why is it significant?


ROSA MARÍA RUIZ: The Madidi National Park alone is the most biodiverse, protected area in the world. In one-tenth of a hectare, for example, we find more than 240 varieties of trees, in one-tenth of a hectare. It has more than 1,000 varieties of birds, about 11 percent of the number of birds in the world. In North America alone, in all of North America, there’s only 700 varieties of birds, to give you an idea. So it’s a concentration of biodiversity. It’s life just pumping away. And it’s extremely important because of the richness that it has.


AMY GOODMAN: And what’s its situation now? Is it threatened?


ROSA MARÍA RUIZ: It’s very threatened. I’m a very strong supporter of Evo Morales, and this conference, I think, is important internationally. So my criticisms are not of this government, but of what I think is very poor advice. He’s very eager to develop the country, as all of us are, but he’s resuscitating projects of right-wing governments, which are, I think, lethal to us.


An example of this are two projects in the area of the Madidi Mosaic. One is the Bala Dam, which we fought against and were able to stop when the right-wing government was proposing it. It’s a dam that would flood 400,000 hectares of the most biodiverse forest in the world in the Madidi park and the Pilon Lajas Biosphere Reserve and indigenous territory.


And another one is a sugar refinery that is proposed, where they would be razing this forest that I’ve just described that has such significant variety. This is trees, but our forests are life and everything, from amazing quantities of insects that are also healers, birds, mammals, reptiles — everything. So let’s face that the forest is more than trees that we’re talking about. It’s this concentration of life. And this razing of this forest to put in a sugarcane industry, I think, is suicidal. Sugarcane destroys the soils. It would make us dependent on chemical fertilizers. And it would destroy what is something unique for all of humanity.


AMY GOODMAN: What about the rainforest here? I hear there is a road proposed to go through it.


ROSA MARÍA RUIZ: There’s a road proposed here in Cochabamba to go through the Isiboro Sécure Park, as well. And this is — Madidi also had four roads built into it after it was declared a park, not with this government, with previous governments. But we fear that this will continue. These roads bring in colonization. It’s very difficult to stop people from moving in. And they also cut through areas that the fauna needs to access water, to access its feeding areas. And it’s the beginning of the end when you have roads like this coming in.


AMY GOODMAN: In the Madidi preserve, you say it’s the largest, most diverse, biodiverse, protected area in the world. If it’s protected, why is it threatened in this way?


ROSA MARÍA RUIZ: Madidi was signed into being as a park in 1995. And from the moment the government came in to administer it in 1996, it started to be destroyed. In 1995, Eco Bolivia Foundation had it almost completely consolidated in production. And since 1996, four roads have been built into it.


The first park director, that was named for it — again, this was with a right-wing government. This was with Gonzalo Sánchez de Lozada, who was thrown out of Bolivia by popular movements. I want to make that clear. It was before Evo. Because of his mining interests, he allowed roads to be built in for mines, for extraction of lumber. And the first park director enriched himself extracting lumber from the park.


To this day, the parkers do commercial hunting. The roads have not been closed. And now there’s a possibility of gas and oil prospection. Concessions have been given to oil companies in the park. So it looks like being declared a park has a very limited effect in what’s protection.


AMY GOODMAN: What are you calling for the Morales government to do?


ROSA MARÍA RUIZ: I’m asking Evo to reconsider these megaprojects that are being done in the Madidi Mosaic, in other areas of the country. There is an eighteenth table that has been called for in this conference precisely for that. There was a resistance to that table, because in an event like this, it’s obvious that you don’t want criticism against your government.


But I think that he’s open enough that I hope he will hear this call from all of us to not focus development on these big megaprojects, on these extractive projects, to not copy the right-wing projects. Those are projects that were developed for making money for a few people. The Bala Dam was proposed by the son-in-law of the former dictator Banzer, and the son-in-law is now wanted for all sorts of crimes he committed. He’s hiding. And we should reconsider. Does someone like that propose something that’s good for us? Obviously not.


So I’m asking Evo, from the bottom of my heart, humbly, please reconsider these projects. The sugar refinery, the Bala Dam, the dam in Cachuela Esperanza, and other projects like that, are not what’s good for our development.


AMY GOODMAN: Rosa María Ruiz, where were you born?


ROSA MARÍA RUIZ: I was born in La Paz, in the department of La Paz, live in the province Iturralde. And I’ve lived most of my life in the rainforest.

AMY GOODMAN: Rosa María Ruiz has worked in the Madidi region of northern Bolivia for decades, leading efforts for the region to be protected.


And that does it for our Earth Day special, as we broadcast live from Cochabamba. The United Nations General Assembly has declared today International Mother Earth Day. It was Bolivia which has taken the lead in bringing the resolution to the assembly. 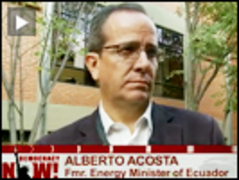