A long-awaited British judicial inquiry into “Bloody Sunday” — when British paratroopers shot dead fourteen demonstrators in Northern Ireland — has found the killings were “unjustified” and lays heavy blame on the army. The findings were celebrated by campaigners for the victims and their families. British Prime Minister David Cameron announced the findings in Parliament and apologized on behalf of the British state. We speak to Eamonn McCann, a journalist and political activist who took part in the march in Derry on Bloody Sunday. He is chair of the Bloody Sunday Trust. [includes rush transcript]

In Britain, a long-awaited judicial inquiry into Bloody Sunday, when British paratroopers shot dead fourteen demonstrators in Northern Ireland, has found the killings were unjustified and lays heavy blame on the army. The findings were celebrated by campaigners for the victims and their families.


British Prime Minister David Cameron announced the findings in Parliament Tuesday and apologized on behalf of the British state.

PRIME MINISTER DAVID CAMERON: The conclusions of this report are absolutely clear. There is no doubt. There is nothing equivocal. There are no ambiguities. What happened on Bloody Sunday was both unjustified and unjustifiable. It was wrong. The government is ultimately responsible for the conduct of the armed forces. And for that, on behalf of the government, indeed on behalf of our country, I am deeply sorry.

The inquiry, known as the Saville Report, comes thirty-eight years after Bloody Sunday. It was January 30th, 1972, when British soldiers of the Parachute Regiment opened fire on crowds at a civil rights demonstration in Derry. Thirteen marchers were killed. Fourteen others were wounded. One later died. It was the biggest British military killing of civilians on its own soil since 1819, and it propelled a generation of nationalists into the Provisional IRA.


The Saville Report concluded that none of the fourteen dead was carrying a gun, no warnings were given, no soldiers were under threat, and the troops were the first to open fire. The 5,000-page report, which was commissioned in 1998, took witness statements from hundreds of people and has become the longest-running and most expensive in British history.


As David Cameron announced the findings, a crowd of up to 10,000 people in Derry’s Guildhall Square erupted in cheers. Tony Doherty is the son of Patrick Doherty, who shot from behind as he attempted to crawl to safety and died at the scene.

TONY DOHERTY: When the state kills its citizens, it is in the interest of all that those responsible be held to account. It is not just Derry or one section of the people, but democracy itself which needs to know what happened here on the streets of Derry in 1972. The British people need to know. The Irish people need to know. The world now knows.

The conclusions of the Saville Report that the killings were unjustifiable and that soldiers lied to the inquiry now opens up the possibility of legal action against former troops involved in the atrocity.


Eamonn McCann took part in the march in Derry on Bloody Sunday thirty-eight years ago. He’s a journalist, a political activist, chair of the Bloody Sunday Trust, joining us now on the phone from Derry.


What is your response to the Saville Report, Eamonn?

Well, my initial response yesterday was one of unbounded joy. We have fought for thirty-eight years, a very, very long campaign, very hard campaign at times, even to spark interest in the issue. And yesterday was the moment when the families — and there’s 200 of the families — and one or two others of us from the campaign gathered inside the Guildhall building in Derry. And I went in, walked into the room, a couple of hours before the publication of the report. And nobody had to talk, from the families who had been there earlier reading the report. Nobody had to say what was in it. It was just a sea of shining faces were there. Relief at last, after all these years. And so, I’ve hardly calmed down, to be honest, since then, conducting this interview from floating around the ceiling of the studio here.

Eamonn, where were you thirty-eight years ago? Describe, from your perspective, what happened on that day.

Well, when the shooting started, I was walking along in the Bogside, which is a large Catholic, working-class area in Derry, where I was born and where I live. And I was walking along that street towards a meeting, which was the culmination of a civil rights march. And I heard just the crack, crack of the rifles from the bottom of the street.


And my first reaction, like so many others, was to throw myself on the ground. I then observed the shooting from the vantage point literally of the gutter. I was lying on my belly in the gutter and trying to crane my back to see what was happening, and seeing people running away and crumpling as they fell. And I didn’t realize at the time that what was happening was that they were being killed.


And I do know, within an hour of that, I was resolved, and thousands of others were resolved who had seen this, who had watched it, this open-air atrocity, that we would have it out with them, that we wouldn’t rest until we had the truth of this officially acknowledged and the killings called by their proper name: murder. And yesterday was the moment when we finally made it to the end of that road.

Eamonn McCann, the final two sentences of the report summary say, “What happened on Bloody Sunday strengthened the Provisional IRA, increased nationalist resentment and hostility towards the army, and exacerbated the violent conflict of the years that followed” Bloody Sunday. “Bloody Sunday was a tragedy for the bereaved and the wounded, and a catastrophe for the people of Northern Ireland.” Do you agree with this? And what do you think needs to happen now?

Well, I certainly agree with all that. I mean, it’s important for people everywhere to understand that sort of the Republican struggle, the IRA armed campaign which developed in Northern Ireland, was in large measure sort of not fueled by a resurgence of nationalist ideology. It actually was the sheer anger of people at the way they were being treated by the British army in their own homes, in their own streets. And Bloody Sunday sort of was the most egregious example of that. And that’s what fueled the sudden growth in the IRA.


And I can remember, quite literally, quite literally, in the days after Bloody Sunday, in the Bogside, people queuing to join the IRA. People — there were two branches of the IRA: the official IRA and the Provisional IRA. I know people who went from one to the other asking for admission, to join up, and being told, “Sorry, we’re closed. We can’t train the people we’ve got. Come back later.” The same people go into the other IRA and say, “Look, can — will you accept me as a member?” And I thought at the time, and still think, that that was a wrong-headed response. Nevertheless, it was absolutely understandable in the aftermath of Bloody Sunday. An awful lot flowed, and an awful lot of terrible things flowed from Bloody Sunday thirty-eight years ago.

What about the holding of those who opened fire responsible and also those above who set the stage and were involved in authorizing this?

As well, your mention of those above is very pertinent. It’s one of the problems with the report published yesterday, is that it does not ascribe blame to any of the officer class. It stops at Lieutenant-Colonel Derek Wilford, who was the commander of the First Battalion of the Parachute Regiment on the day. But it doesn’t attach any significant blame to the people, the senior — most senior officers who decided to send this elite regiment as sort of the front line killers for the British establishment. The people who sent them to police a civil rights march bear a load of responsibility, even if they didn’t order a massacre. They clearly knew that a massacre was the possible result of unleashing the Paras into that crowded situation. And yet, it may be that once again they are going to get away with it, as it were. So that’s something which you have to — who got away with it, I mean, they will be pursued by people like me into the future.

Eamonn McCann, I want to thank you for being with us, took part in the march thirty-eight years ago on Bloody Sunday. He is now chair of the Bloody Sunday Trust, now a journalist and political activist based in Derry. 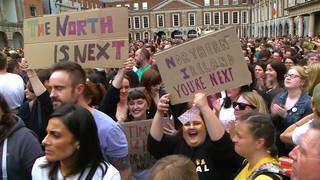