Rep. John Conyers and Out of Afghanistan Caucus Oppose Obama Admin’s $33B Escalation of Afghan War

Democratic Rep. John Conyers, chair of the House Judiciary Committee and the co-chair of the Out of Afghanistan Caucus, joins us to discuss his opposition to the $33 billion earmarked for the escalation of the war in Afghanistan. Conyers and other antiwar lawmakers are holding a news conference today after the end of the bloodiest month for international troops in Afghanistan. [includes rush transcript]

JUAN GONZALEZ: We are joined by Democratic Congressman John Conyers. He’s the chair of the House Judiciary Committee and the co-chair of the Out of Afghanistan Caucus. He’s speaking today at a press conference with other lawmakers opposed to the $33 billion earmarked for the escalation of the war in Afghanistan. The funding is contained in the Supplemental Appropriations Act of 2010. The press conference is being held one day after the end of the bloodiest month for international troops in Afghanistan.


REP. JOHN CONYERS: What a pleasure to be on the show. Top of the morning to both of you.


JUAN GONZALEZ: So, can you tell us, in terms of your efforts now to oppose this increase in funding, why you’re doing it? And what do you see, especially after this conversation we’ve been having here on the sacking of General McChrystal, as to what the future holds for our nation in Afghanistan?


REP. JOHN CONYERS: Well, it’s never been clear to me that, through war, we can bring peace, especially when we’re the invaders. We’re the ones using drones. We’re causing civilian deaths to many people who would otherwise be more friendly to us. We’re creating the terrorists. This is not being lost on most of the people in the country now. Our constituents now want us out of both Afghanistan and Iraq. And what we’re doing now is forming a way to discuss this with our president in an effort to make him more comfortable with doing what most people want him to do and what we thought he was going to do in the first place — namely is to clearly disengage from the military, increase the diplomatic activity, and bring in some help in terms of food supplies, aid, and positive buildup of these countries, and to make as many friends as we can over there, rather than this ninth year of what has now become a debacle in every respect.


AMY GOODMAN: Congressman Conyers, what is the War Is Making You Poor Act?


REP. JOHN CONYERS: Well, the War Is Making You Poor is a brilliant device by Grayson, my colleague Alan Grayson, in which we’re doing just three things. One, we limit the amount of funding of the wars in both countries. We eliminate the federal tax on all Americans that make less than $35,000 a year. And as a result — and this has been confirmed by the Joint Committee on Taxation — we reduce the debt by almost $16 billion, our debt. And so, it’s a combination of things that are happening now, Amy, that make it clear to more and more members of Congress that you can’t keep a straight face on all of this incredible indebtedness, talk about all the money that we’ve shoveled out to Wall Street, and credit isn’t loosening up, unemployment is still at all-time highs. We’re projected in Detroit to have more foreclosures on homes than last year. And so, we’ve got to turn with — especially with all the shouts about being fiscally conservative, the way to climb out of this is to reduce the obligations of our government. Here we are in hundreds of billions of dollars of war debt, and our president is saying we now have to have an emergency funding, which is merely another way of saying we’re going to specially fund the Afghanistan surge. It makes no sense. And I think militarily, it is not logical. And, of course, morally, I can’t remember anything like this since Korea and Vietnam, to be honest with you.


AMY GOODMAN: Chairman Conyers, we have to break. And when we come back, we’re also going to be joined by the highest State Department official to quit over the Afghan war, Matthew Hoh. 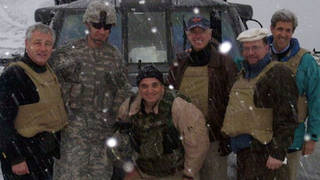