The Obama administration announced last week that it is safe to eat fish and shrimp caught in the 78 percent of federal waters in the Gulf that are now reopened to fishing. But many are still concerned about the levels of toxins in the water and the impact on marine life. Independent journalist Dahr Jamail has been reporting from the Gulf Coast for over a month now. Last week he spoke to some commercial fishermen in Mississippi who are refusing to trawl because of the oil and dispersants that are still in the water. [includes rush transcript]

AMY GOODMAN: The Obama administration announced last week it’s safe to eat fish and shrimp caught in the 78 percent of federal waters in the Gulf that are now reopened to fishing. But many are still concerned about the levels of toxins in the water and the impact on marine life. Independent journalist Dahr Jamail has been reporting from the Gulf Coast for over a month now. Last week he spoke to some commercial fishermen in Mississippi who are refusing to trawl because of the oil and dispersants that are still in the water. James “Catfish” Miller told Jamail, quote, “Why would we lie about oil and dispersant in our waters, when our livelihoods depend on our being able to fish here?” Dahr Jamail joins us now by Democracy Now! video stream from Texas, where he lives.


Welcome to Democracy Now!, Dahr. Talk about what you have found in Mississippi.


DAHR JAMAIL: Last Thursday, I went out on a boat with Mr. Miller, as well as his friend and another commercial fisherman, Mark Stewart. Both of them are long-term, multi-generational fishermen in Mississippi, and they also are both former members of BP’s Vessels — so-called Vessels of Opportunity program, the VOO program, both recently released from that program as BP scales back its response efforts. And they’re very concerned because they usually trawl for shrimp around the Mississippi Sound and sometimes outside the barrier islands of Mississippi, and they — what they told me, and actually what they showed me, is that the area is extremely unsafe, that oil, submerged oil, mixed with dispersants, have infiltrated the area.


We drove around on his trawler for several hours, and you could watch on the sonar clouds popping up. We were in about twelve, thirteen feet of water. And the middle part of the area would literally fill up with a big cloud, and we would stop the boat, and he would basically drop down, tie some sorbent pad to a grappling hook, drop it down in the water and pull it up, and it would be covered in sort of a slimy, brown oil-dispersant mix. And it was — we did that eight times. Every single time, we caught oil and dispersant mix.


And it was a very disturbing thing to see, in addition to the fact that these guys said, “Look, we refuse to fish here, because this is so toxic, and we can see that there’s less life here.” They have friends who have started to try to fish, because the Mississippi Department of Marine Resources on August 6 reopened much of their fishing grounds to commercial fishermen and recreational fishermen. And they know personally, both Miller and Stewart — they know commercial fishermen who are going out and catching either nothing or a maximum 200 pounds of shrimp per go, in a situation where normally they would be catching between 700 pounds and a thousand pounds a night. And according to them, 200 pounds, you can’t even pay your — cover your expenses with that much. They’re also reporting seeing crabs in the middle of the day trying to crawl out of the water, because there is not enough oxygen in the water. They’re seeing far, far less birdlife and overall marine life throughout the entire Mississippi Sound, as well.


AMY GOODMAN: Can you talk about who is spraying the dispersant, Dahr?


DAHR JAMAIL: These men, along with numerous other commercial fishermen, all of which were members of the VOO program in Louisiana, Mississippi, Alabama and the western Panhandle of Florida, are all pointing the finger at BP for hiring out-of-state contractors, meaning not Gulf Coast community workers but people who don’t live on the — in the Gulf Coast region, to come in and go out in a type of boat called a Carolina Skiff, which is basically being used as a utility boat. Both Miller and Stewart both told me they’ve been eyewitness to this. And these boats basically go out to the areas that VOO workers identify as oiled areas, that the VOO workers will go up in all four states over the last several months, find the oil, call in the location to BP command, be sent away from that oil, and then they will see, as they go in from their day of work out on the water, they’ll see these foreign — these out-of-state contract workers, private contractors, going out in these Carolina Skiff boats with big white tanks in them, 375-gallon white tanks, and go out and spray the oil. And Stewart and Miller both told me they were eyewitness to this personally, that they saw these boats at times hosing down from the boats with dispersants giant patches of oil floating in the water. And then, when they would come — the VOO workers would come back out the next day, go to where the oil was they had located the day before, and there would be nothing but a big pasty, white, emulsified, foamy substance atop the water, which has become commonly known throughout the Gulf region now as the remnants of dispersed oil, after they come out, hit it with dispersants, sink the oil, and then that’s all that’s left. And this has been reported to me by commercial fishermen, most of which were members of the VOO program in all four of the most heavily affected states to date.


AMY GOODMAN: Ian MacDonald, can you talk about the danger of these dispersants? Do you understand what it is, and that whole issue of the fact that it was proprietary, the company that made it? Did you and other scientists, the US government, ever reveal exactly what was in these dispersants and their effect on the marine life in the ocean?


IAN MacDONALD: I think we have a better idea what’s in the dispersant now than we did to begin with. There have been a couple of different types of dispersant applied. Apparently, what they were using to start out with was fairly toxic overstocks, and then they came out with a newer formulation that was less toxic. I think if the Carolina Skiff operation that we’ve just heard described is what’s going forward, I’ll say that I’ve seen similar things offshore Louisiana, offshore Venice. If you go out to the tide line, after the oil stopped flowing, what it tends to do is the thin layers of oil roll over on themselves, and they roll over and roll over until they become huge gooey mats of a sort of a ropey light brown stuff, which floats in the tide line. I mean, it’s not a continuous thing, but there are these big clumps of it. You know, the appropriate response would be to go out and try to skim it up and remove it from the ecosystem. But if you use dispersant in the way that’s been described, what you do is you hide it from view. You sink it to the bottom of the ocean, with the hope that somehow or another Mother Nature is going to clean it up for you. So, essentially, what’s been described here, dispersant is being used to sweep this stuff under the rug, instead of remove it from the house. And, you know, that is a matter of grave concern, if that’s what’s happening on a broad scale.


AMY GOODMAN: Finally, Dahr Jamail, talk about, in this last — in your last comment here, what most surprised you in this month, and in the progression of the month, before you returned to Texas?


DAHR JAMAIL: I think the ongoing cover-up by BP of simultaneously scaling back the response effort along with trying to act as though everything is OK and life is back to normal, because what I’ve seen across the Gulf region, actually over the last couple of months, most of which spent down there, is that there’s massive fish kills in one or all of the four states on any given day. There’s massive amounts of oil continuing to be found, both submerged as well as floating around and washing up on land. And people are suffering in a very severe way. And from what I’m seeing, the crisis seems to continue to get worse, more and more people being made sick living along the coast, blaming the use of the dispersants. Meanwhile, BP and the federal government and the Coast Guard and NOAA, among other federal agencies, continue to pretend as though everything’s just fine. And actually, right now, it seems to be the worst I’ve seen it yet.


AMY GOODMAN: And it’s interesting. You spent a lot of time in Mississippi. Haley Barbour, the Governor, what are people’s attitudes toward him, since he’s being talked about as a possible Republican presidential candidate?


DAHR JAMAIL: He’s hated by every single commercial fisherperson I spoke with in Mississippi had nothing but terrible things to say about Haley Barbour. He’s looked upon as an extremely corrupt official. For example, Mr. Bill Walker, the head of Mississippi’s DMR, who opened up the grounds, basically announced last Monday that Mississippi was given $25 million of response-effort moneys, only $500,000 of that has been spent. And he announced that everything’s good, the oil is gone, we won’t be issuing out any more of that money. And that’s being viewed by people in Mississippi as another money grab by Governor Haley Barbour.


AMY GOODMAN: Dahr Jamail, I want to thank you for being with us, speaking to us from Marfa, Texas, has been reporting from the Gulf for the past month. And Ian MacDonald, oceanographer at Florida State University, thanks so much. 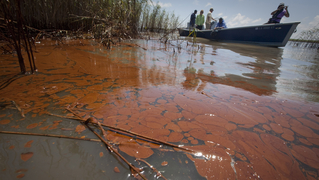