Rwanda is facing explosive allegations from the United Nations of committing war crimes and possibly even genocide in the Democratic Republic of Congo. A leaked report from the UN high commissioner for human rights says that after the 1994 genocide in Rwanda, Tutsi-led Rwandan troops and their rebel allies killed tens of thousands of members of the Hutu ethnic group inside the Congo. [includes rush transcript]

JUAN GONZALEZ: Rwanda is facing explosive allegations from the United Nations of committing war crimes and possibly even genocide in the Democratic Republic of Congo. A leaked report from the UN high commissioner for human rights says that after the 1994 genocide in Rwanda, Tutsi-led Rwandan troops and their rebel allies killed tens of thousands of members of the Hutu ethnic group inside the Congo.


A draft of the report states, quote, “The majority of the victims were children, women, elderly people and the sick, who were often undernourished and posed no threat to the attacking forces.” The report goes on to say the crimes committed by Rwandan forces amount to “crimes against humanity, war crimes, or even genocide.”


Rwanda has long claimed it attacked Hutu camps in eastern Congo to pursue those responsible for the killings of over 800,000 Tutsis in the Rwandan genocide. But the report marks the first time the UN has accused Rwandan forces of deliberately attacking the tens of thousands of Hutu civilians who also had fled. The report provides a stark challenge to the conventional history of the period following the Rwandan genocide and the violence in the eastern Congo, which has been the deadliest armed conflict since the Second World War.


The US-backed Rwandan government has dismissed the report, and has threatened to withdraw from UN peacekeeping missions if it’s published. There has been speculation the report was leaked to preempt a Rwandan government campaign to alter its findings before its expected release next month.


Peter Erlinder is a lawyer at the International Criminal Tribunal for Rwanda and a past president of the National Lawyers Guild. Earlier this year he was jailed in Rwanda for three weeks after arriving to help with the legal defense of Rwandan opposition leader Victoire Ingabire. Peter Erlinder joins us now from Minneapolis, Minnesota.


JUAN GONZALEZ: Well, tell us first about the impact of this report and the continuing press revelations about a report still to be released.


PETER ERLINDER: Well, the report’s very important, of course, because it’s getting traction, but it’s not the first time that this information has been made public. In fact, the reason I was arrested is because I introduced evidence at the UN tribunal explaining that the Rwandan government was committing genocide in Rwanda in 1994. And in fact, I have UN documents that I put into the record in the Rwanda tribunal showing that on September 19th, 1994, there was a meeting in Nairobi involving Kofi Annan in which the subject of the meeting was a report that the RPF had committed genocide against Tutsis in Rwanda during July and August 1994, and that report was suppressed. That report was also given to Warren Christopher in mid-September 1994. And the documents are available for anyone to see on my website, www.rwandadocumentsproject.net. And it’s those documents that got me arrested in Rwanda, because I’m accused of being a genocide denier because I put those documents up years ago. And right now it’s quite clear that the UN has been watching that, as well.


JUAN GONZALEZ: And in terms of the reality that this is really a reexamination of the whole narrative that has developed —-


JUAN GONZALEZ: —- in the past decades over what happened in Rwanda and eastern Congo, could you talk about that narrative and how it developed?


PETER ERLINDER: Yeah. It’s very important to talk about that. Because of the disclosure principles in the Rwanda tribunal, it was possible for me to get access to the original UN files that explained what UN personnel were reporting about what was going on during the genocide, what we call the genocide. We have to remember that it was the victors in the Rwanda war — and it was a four-year war of aggression, not just the last ninety days, that were important — but the victors in the war told the story of what happened during the war. And as we remember from that famous documentary The Fog of War, Robert McNamara told us that had the Japanese won the war, he and the other planners of the napalm bombing of Tokyo would have been the war criminals. This is an old story. The victors told the story of the war. The story they told was that the vanquished side had long planned a genocide. And in fact, the records in the UN files show that that was not true, and my client was acquitted of planning and long-term conspiracy to commit genocide.


And the other narrative is actually written already in the brief that we filed in the ICTR in 2006. And I’d be happy to suggest that anyone could read that, as well as looking at the documents that we filed in court three years ago that explain that actually the planning was part of the military strategy of the RPF to take advantage of massive killings of civilians that they knew would happen once they assassinated the two presidents, Habyarimana and Ntaryamira, which is really what triggered off the massive killings. And I could explain that more, but the whole narrative is going to have to change now.


JUAN GONZALEZ: Well, President Kagame of Rwanda has long claimed that he helped end the genocide. What is his role? And what do you see that these documents indicate in terms of his participation or his direction of some of these genocidal acts?


PETER ERLINDER: Well, we have to be clear that President Kagame was the military intelligence chief for President Museveni during his war to take power in Uganda from '81 to ’86, and about half-a-million people in Uganda died in that war. He then was studying at Fort Leavenworth in the United States when part of the Ugandan army invaded Rwanda, about 3,000 troops. He then became the commander of those troops. That army grew from 3,000 Ugandan troops to an army of 25,000 well-trained, well-armed troops in a period of two years. How that was accomplished without massive outside support is anyone's guess. There must have been massive support in order to accomplish that. So they became the militarily dominant force and the aggressor in Rwanda by February of 1993.


We know that in November of '93, the US ambassador for Rwanda, Robert Flaten, warned Kagame that if he resumed the war and broke the ceasefire, he'd be responsible for massive deaths in Rwanda, just like had happened in Burundi in October of '93. The president of Burundi had been assassinated by the Tutsi military in Burundi in October of ’93. There had been huge violence. Two hundred thousand people or more died. Half-a-million people came into Rwanda. Rwanda already had a million and a half displaced people because of the war. We now know that six months later Kagame assassinated two presidents, the Rwandan president and the Burundian president. The country exploded in violence the way the US ambassador predicted that it would. And we have the documents showing that the government in place made repeated requests that Kagame use his military, together with the military in place, to stop the massacres. He refused. And UN General Dallaire said, “Of course he wouldn't do that. He’s winning the war. Why should he? And the civilian deaths are collateral damage for his war plan.” It’s all in the documents that are in the record at the UN tribunal, that I found in UN files and that are on the website that I mentioned to you. They’ve been there for several years, actually.


JUAN GONZALEZ: And Peter Erlinder, both the United States and Great Britain are big supporters of the current Rwandan government. Why is that? And have you found any evidence that US officials or British officials tried to delay the issuing of this report?


PETER ERLINDER: Well, I haven’t found evidence with respect to delaying the issuance of this report, but I can say we have evidence that at the UN tribunal for Rwanda the United States government has fired the chief prosecutor, Carla Del Ponte, when she attempted to prosecute President Kagame and the RPF for the crimes that they committed in Rwanda. She has had the evidence that he assassinated the previous two presidents since 1997, when FBI agent Jim Lyons and Crown prosecutor Michael Hourigan presented the prosecutors’ office with evidence that Kagame was responsible for the assassination and then many other crimes, as well. But not one member of the Rwandan RPF have been prosecuted at the tribunal, which means it’s either the only war in history in which only one side committed crimes or the tribunal has been manipulated.


Carla Del Ponte wrote a memoir, which was published in February of last year in English, in which she describes — she was called to the State Department and ordered not to prosecute Kagame or the RPF in 2003. If she insisted on doing it, she would lose her job. She said, “I work for the UN, not for the US.” Pierre Prosper, the war crimes ambassador for Bush, said, “That’s what you think.” Within sixty days, she was removed from her job. And, of course, every judge, every prosecutor, everyone working for the UN tribunal knows she was removed from her job because she had the evidence to prosecute the ICTR and insisted on doing so, so you can only conclude what sort of justice is available at the ICTR.


JUAN GONZALEZ: Well, Peter Erlinder, I want to thank you very much for being with us. We’ll continue to follow this story.


JUAN GONZALEZ: Peter Erlinder is a lawyer at the International Criminal Tribunal for Rwanda and a past president of the National Lawyers Guild. 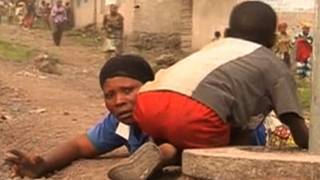