New York Governor David Paterson has signed into law a measure establishing a landmark set of working standards for housekeepers, nannies and other domestic workers. With the signing of the Domestic Workers Bill of Rights, New York becomes the first state where domestic workers will be guaranteed overtime pay after a forty-hour workweek, at least one day off per week, and at least three days off with full pay per year. [includes rush transcript]

JUAN GONZALEZ: New York Governor David Paterson has signed into law a measure establishing a landmark set of working standards for housekeepers, nannies and other domestic workers. With the signing of the Domestic Workers Bill of Rights, New York becomes the first state where domestic workers will be guaranteed overtime pay after a forty-hour workweek, at least one day off per week, and at least three days off with full pay per year.


The passage of the bill comes after a six-year organizing campaign by Domestic Workers United, an organization led by immigrant nannies, housekeepers and elderly caregivers. Labor organizers are now hoping other states will enact similar laws to protect domestic workers who for decades have not been covered by federal labor laws, including the National Labor Relations Act and the Fair Labor Standards Act.


We’re joined now by two guests. Ai-jen Poo is the executive director of the National Domestic Workers Alliance. Ten years ago, she helped found Domestic Workers United after meeting a group of Filipina nannies who complained about their working conditions. We’re also joined by Patricia Francois, who has worked for many years as a nanny in New York after moving here from the Caribbean nation of Trinidad.


Welcome to both of you.


JUAN GONZALEZ: Ai-jen, the importance of this bill and of the governor signing it, finally?


AI-JEN POO: This bill is really the first time there’s been official recognition of this workforce as a workforce that does vital work and provides a vital service for New York and for this country, and of the injustice of the discrimination that the workforce has faced in the labor law. Having been excluded from almost every major labor law for generations, the workforce has been rendered vulnerable to abuse and exploitation. And so, despite the really important work that the workers do, they’re very vulnerable to abuse. And so, this is the first time that the work is being recognized and the workers are having a minimum standard of protection.


JUAN GONZALEZ: And how — approximately how many domestic workers are there in New York and throughout the nation?


JUAN GONZALEZ: —- your story and how you got involved in the movement to establish the bill of rights.


PATRICIA FRANCOIS: I got involved when I found a newsletter in Central Park on a bench, all by himself waiting for me. And I read it. And after reading the contents, you know, it was really significant for me, being an undocumented nanny. And we all do need protection. And as it is, after six-and-a-half years, we finally got this bill, after decades and decades of injustice. And for me, it means the recognition for the work that we do. It means respect, that we never get, and, most of all, to be included in the labor laws, to be protected by the labor laws.


JUAN GONZALEZ: What were some of the conditions that you labored under previously that now would be eliminated?


PATRICIA FRANCOIS: The abuse —- physical abuse, the verbal abuse. We now have some protection, that if it do happen, it is in the attorney general hands, where he can assist us and seek justice, because it’s a human right.


JUAN GONZALEZ: Now, you had filed a lawsuit against a previous employer of yours. Could you talk about that?


JUAN GONZALEZ: And again, in terms of some of the key provisions of the bill, were there any that were particularly difficult to get the legislature to pass? Because obviously, in Albany, it’s a mixed bag in terms of -—


JUAN GONZALEZ: — the kind of political support you would get for a bill like this.


AI-JEN POO: Absolutely. And when we first started out, we were demanding a living wage of $14 an hour, healthcare, paid vacation, paid sick days, notice of termination. When the workers came together and developed their vision of what it would mean to have respect and recognition on the job, all of those pieces were really important. So this is an ongoing fight. The paid leave, the three days minimum paid leave that we were able to get included in the bill, is a really important beginning. A lot of workers don’t get paid leave at all. So that establishes a bare minimum. And we need to continue organizing for more.


JUAN GONZALEZ: Now, there had been a similar bill passed in California by the legislature there, but Governor Schwarzenegger vetoed it?


JUAN GONZALEZ: Could you talk about the differences between the bills and what the prospects now might be in California again?


AI-JEN POO: So, the bill in California included overtime pay and a day of rest. And our bill includes protection also from discrimination, from harassment, inclusion in disability laws, inclusion in overtime laws at your regular rate of pay. So there’s more in this bill that covers almost every major issue that other workers are covered by. It also — our bill in New York also mandates that the Department of Labor study the feasibility of collective bargaining in this industry. And we’re hoping that that paves the way for either the establishment of more benefits or the rights to organize for domestic workers.


Now, in California, the legislature last week just passed a resolution supporting recognition and labor standards, which will pave the way once again for a California Domestic Workers Bill of Rights. And now, with the New York victory, we believe that the chances that that will move quickly through the California legislature are very great, and there’s eight domestic worker organizations that are working very hard in California to make sure that that happens.


JUAN GONZALEZ: Patricia Francois, could you talk a little bit about the real-life conditions that an average nanny in New York faces today? Obviously, many middle-class New Yorkers depend on nannies to be able to continue to work and to provide for their own families. But what are the conditions under which they work today?


PATRICIA FRANCOIS: We work long hours, no overtime pay. My experience, after working six-and-a-half years, never had an increase in salary, as well as no overtime pay. At times, if you work on your vacation, if you don’t stand up for that vacation pay, you will not get it. You know, and it’s hard at times — when you stand up for yourself, that is the time the abuse comes in. You get a verbal abuse. You get threatened with immigration. And it’s wrong. It’s wrong.


And I am thankful that I am a part of Domestic Workers United, because we come out and do real work. We dedicate our lives to the work that we do. You know, we take care of the future generation. We take care of the worldly possessions. We even take care of the elderly. You know, and we get no appreciation whatsoever. Now, I’m not saying all employers are wrong, but it have employers that’s willing to do what is right, some of them already doing what is right. And for those who is not doing right, the Bill of Rights will set a guideline so that employers will be able to follow, and employees will get the justice that they deserve, respect and recognition.


JUAN GONZALEZ: OK. Well, I want to congratulate on the tremendous victory that you’ve achieved after six long years of struggle to get the bill passed.


JUAN GONZALEZ: And I want to thank you both for being with us. Patricia Francois is a member of Domestic Workers United who has worked for many years as a nanny. Ai-jen Poo is the executive director of the National Domestic Workers Alliance. 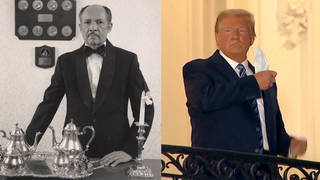