U.S. Pulls All Funding for UNESCO After Sweeping Vote to Support Palestinian Membership

In an emotional—and largely symbolic—move, the United Nations cultural organization known as UNESCO overwhelmingly voted to grant membership to the Palestinians, despite opposition from the United States and Israel. Now the United States says it will cancel a $60 million payment due in November to the U.N. body. Membership dues paid by the U.S. account for about a fifth of UNESCO’s annual budget. The U.S. is also threatening to veto any Palestinian effort to be recognized by the U.N. Security Council as an independent state. “By going to UNESCO, this was a way both of gauging where the public opinion is among the various governments and, more importantly, symbolically for the world, showing that this is a moment of recognition that the 20-year-old U.S.-controlled so-called 'peace process' simply hasn’t worked,” said Phyllis Bennis of the Institute for Policy Studies. [includes rush transcript]

KATALIN BOGYAY: Votes in favor, 107. Votes against, 14. Ladies and gentlemen, the General Conference has thus voted to adopt the draft resolution and decided to admit Palestine as member of UNESCO.

AMY GOODMAN: Among the countries that supported the Palestinian membership were China, Russia, India, Brazil, South Africa and France, which is on the U.N. Security Council. Among those abstaining were Britain and Bosnia, which currently also has seats on the Security Council. It could oppose Palestinian statehood in a separate vote by that body scheduled later this month. The U.S. has threatened to use its veto, but Bosnia could make that unnecessary.

Meanwhile at UNESCO, no country has veto power, but both the U.S. and Israel opposed the vote Monday. Now the U.S. says it will cancel a $60 million payment due in November to the U.N. body. Membership dues paid by the U.S. account for about a fifth of UNESCO’s annual budget. This is State Department spokesperson Victoria Nuland.

VICTORIA NULAND: Today’s vote by the member states of UNESCO to admit Palestine as a member is regrettable, premature, and undermines our shared goal of a comprehensive, just and lasting peace in the Middle East. The United States remains steadfast in its support for the establishment of an independent and sovereign Palestinian state. But such a state can only be realized through direct negotiations between the Israelis and the Palestinians. The United States also remains strongly committed to robust, multilateral engagement across the U.N. system. However, Palestinian membership as a state in UNESCO triggers longstanding legislative restrictions which will compel the United States to refrain from making contributions to UNESCO.

AMY GOODMAN: Victoria Nuland, State Department spokesperson. Diplomats said UNESCO may be forced to lay off employees and shut down offices, given the reduction in their budget.

To talk more about the significance of Palestine’s UNESCO membership, we go to Washington, D.C., to Phyllis Bennis, fellow at the Institute for Policy Studies, has written a number of books, including Challenging Empire: How People, Governments, and the UN Defy US Power and Understanding the Palestinian-Israeli Conflict: A Primer.

Phyllis, welcome to Democracy Now! Talk about the significance of the UNESCO vote.

PHYLLIS BENNIS: The UNESCO vote was seen symbolically as the first effort of the Palestinians to win membership as a full member state. You’ll remember, Amy, that the effort began about a month ago, when the Palestinians went to the Security Council and the General Assembly in a series of discussions and a series of steps to ask for membership in the United Nations as a whole. That’s been on hold for awhile. The U.S. has made it clear that it will veto that decision in the Security Council. It has to happen there first. So, by going to UNESCO, this was a way both of gauging where the public opinion is among the various governments and, more importantly, symbolically for the world, showing that this is a moment of recognition that the 20-year-old U.S.-controlled so-called peace process simply hasn’t worked. It has not brought the Palestinians any closer to reaching their rights, including but not limited to statehood, and that the question of what happens to Palestine is not something that can be limited to what the U.S. and Israel say.

So, what we’re seeing right now, it’s an extraordinary thing. You had 107 countries voting to authorize Palestinian membership as a full member state, as an equal member of UNESCO, and the U.S. immediately says in response to that, “We have longstanding laws that require us to stop paying the required dues for our obligations to UNESCO,” which is about $70 million a year. About $60 million will be owed this month. And what we’re seeing there is really a classic example of the one percent, where most of our interests do not lie, controlling the 99 percent, the one percent being Israel and its supporters in the United States saying that the U.S. should take an incredibly drastic position, ending its support of UNESCO, which of course eventually will mean the U.S. will lose its vote in UNESCO, and potentially, similarly, in other U.N. agencies along the way.

There are several agencies where there is automatic approval, if the Palestinians request it, once they’ve been approved by UNESCO. They can automatically join several other agencies, one of which, the World Intellectual Property Organization, is one that is of great concern to major U.S. corporations like Google and Microsoft, Apple, all of these corporations that are very concerned about issues of trademarks and copyrights. They’re rather terrible legislation that goes on there, but that’s a different issue. The reality is that for those major corporations, this is absolutely not in their interests. It’s going to be interesting to see whether they come back and push back against the Obama administration and against Congress for imposing these laws that really put their presence in these agencies at great risk, because once the U.S. stops paying its dues, it starts to lose its votes in all those organizations.

AMY GOODMAN: I want to play a clip from the news conference where State Department spokesperson Victoria Nuland announced the U.S. would no longer pay its dues to UNESCO. She was questioned at length by Matthew Lee, a reporter with the Associated press.

MATTHEW LEE: Going back to what you said in your opening, you said that this was—is regrettable, premature, and undermines our shared goal. Whose shared goal? Who shares this goal of the only 13 other countries that voted with you?

VICTORIA NULAND: Countries all over the international system share the goal of a Palestinian state in secure borders.

VICTORIA NULAND: You’ll have to speak to them about why they made the decision that they made. We considered that this was, as I said, regrettable, premature, and undermines the prospect of getting where we want to go. And that’s what we’re concerned about.

VICTORIA NULAND: The concern is that it creates tensions when all of us should be concerting our efforts to get the parties back to the table.

MATTHEW LEE: OK, the only tensions that it creates—the only thing it does is it upsets Israel, and it triggers this law that you said—that will require you to stop funding UNESCO. Is there anything else? There’s nothing that changes on the ground, is there?

VICTORIA NULAND: Our concern is that this could exacerbate the environment, which we are trying to work through so that the parties will get back to the table.

VICTORIA NULAND: Well, I think you know that this administration is committed to UNESCO, rejoined UNESCO—

MATTHEW LEE: Well, actually, it was the last administration that rejoined UNESCO, not this one. But I need—I need to have some kind of clarity on how this undermines the peace process, other than the fact that it upsets Israel.

VICTORIA NULAND: Again, we are trying to get both of these parties back to the table. That’s what we’ve been doing all along. That was the basis for the President’s speech in May, basis of the diplomacy that the Quartet did through the summer, the basis of the statement that the Quartet came out with in September. So, in that context, we have been trying to improve the relationship between these parties, improve the environment between them, and we are concerned that we exacerbate tensions with this. And it makes it harder to get the parties back to the table.

MATTHEW LEE: Since the talks broke off last September until today, how many times have they met together, with all your effort?

VICTORIA NULAND: How many times have the parties met?

VICTORIA NULAND: I think you know the answer to that question.

AMY GOODMAN: That was Victoria Nuland being questioned by the AP reporter, Matthew Lee. Phyllis Bennis, your response?

PHYLLIS BENNIS: Well, it’s extraordinary to watch Matt Lee’s pressure on Victoria Nuland, when she had no answer. This notion that somehow the U.S. is working so hard behind the scenes or in front of the curtain, or wherever they think they’re working, to, quote, “improve the environment,” when the U.S. has done nothing to stop the actual destruction of the, quote, “environment,” when Israel has built increasing numbers of settlements. The settlement construction, as Matt Lee even said in that press conference, has consistently and continues to destroy the prospect of a Palestinian state. And yet, the U.S. has, at most, made mild statements of concern. “We are concerned about these acts that are not helpful.” And then they move on.

When there is a Palestinian move, which is broadly supported across the world, including by a wide range of U.S. allies, like France, you have a massive consequence that these old laws, one passed by George Bush, Sr., under the administration of George Bush, Sr., and signed by him, the other signed off by President Clinton in 1994, both of which require really drastic consequences, not particularly that harm the Palestinians themselves, but that harm the U.S. role in the world, that harm the United Nations. This is going to do great harm to UNESCO and its work in protecting the World Heritage sites, its work in distributing information that shares science across the world, its work that protects indigenous languages. Those are the things that we will see being undermined by this U.S. response. There is nothing here that undermines the possibility of any sort of legitimate peace process. What it undermines is the illusion, the false illusion, that the U.S.-backed so-called peace process of 20 years is somehow moving towards the possibility of a just, lasting and permanent solution to this conflict.

AMY GOODMAN: We’re talking to Phyllis Bennis, fellow at the Institute for Policy Studies. When we come back from break, I want to ask you about Libya. NATO says it’s ended its intervention there. We want to talk about just what it meant for Libya and what it means for the rest of Africa. Phyllis Bennis, in a minute. 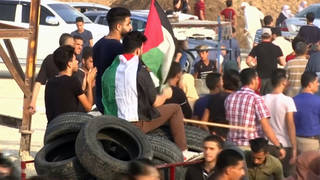