Environmental activists are claiming victory after the Obama administration announced Thursday it will postpone any decision on the proposed 1,700-mile Keystone XL tar sands oil pipeline until 2013. The announcement was made just days after more than 10,000 people encircled the White House calling on President Obama to reject the project, the second major action against the project organized by Bill McKibben’s 350.org and Tar Sands Action. In late August and early September, some 1,200 people were arrested in Washington, D.C., in a two-week campaign of civil disobedience. “We believe that this delay will kill the pipeline,” says the Canadian author and activist Naomi Klein. “If it doesn’t, if this pipeline re-emerges after the election, people have signed pledges saying they will put their bodies on the line to stop it.” Klein notes that, “I don’t think we would have won without Occupy Wall Street… This is what it means to change the conversation.”

AMY GOODMAN: Environmental activists are claiming victory after the Obama administration announced Thursday it will conduct a review of the route of the 1,700-mile Keystone XL tar sands oil pipeline and put off any decision on approving the pipeline until 2013. The announcement was made just four days after over 10,000 people encircled the White House, calling on Obama to reject TransCanada’s plan to build a pipeline stretching from Alberta, Canada, to Texas.

Sunday’s protest was the second major action against the project, organized by environmentalist Bill McKibben of 350.org and Tar Sands Action. In late August and early September, over 1,200 people were arrested in Washington, D.C., in a two-week campaign of civil disobedience.

Among those arrested in August was the Canadian writer Naomi Klein. On Thursday night, she spoke to a packed house at New School University at a forum about Occupy Wall Street. She began by talking about the Keystone pipeline.

NAOMI KLEIN: Just a few hours ago, the White House announced that it is going to have a new environmental review for the Keystone XL pipeline. That review is going to take at least a year, and the company that wants to build the Keystone XL pipeline, TransCanada, has said that it can’t handle another delay, that their investors will lose faith. You know, investors don’t like economic uncertainty. And they’ve already dealt with a lot. The review is going to be looking at rerouting the pipeline around the Ogallala Aquifer, and TransCanada has also said that they can’t reroute it around the aquifer and still have this project be economically feasible.

So, OK, it’s not the victory that we wanted. We wanted Obama to kill the pipeline because of what the pipeline is carrying, which is tar sands dirty oil, which is catastrophic, no matter how you pipe it, for the planet, for the climate. But we knew we weren’t going to get that. We knew we weren’t going to get that in an election year, because the right would have gone to town on Obama as a job killer. But we believe that this delay will kill the pipeline. And if it doesn’t, if this pipeline reemerges after the election, people have signed pledges saying they will put their bodies on the line to stop it and that civil disobedience, that I and 1,200 others engaged in outside the White House with the arrests this fall, that this will become actions in front of bulldozers. I mean, people are ready to take that type of action. And so, we put them on notice.

But when we started this campaign, we—and this was just three months ago that the first protests happened outside the White House—we thought we had a very slim chance of winning, like a kind of a 1 percent chance of winning. And when Occupy Wall Street happened, I had a conversation with Bill McKibben, who has just been the powerhouse behind this campaign, just a hero. And I said to Bill, “I think this is helping us. What do you think?” And he said, “I think it’s helping us, too.” And the reason we believe this is because—precisely what Patrick was talking about—the ground has shifted, the climate has shifted. And what it would mean for Obama to cave in to this corporation, especially after we exposed all the cronyism going on between TransCanada and the State Department and TransCanada and the White House, this kind of corruption is precisely what’s on trial in parks and plazas around the world right now. And now that it’s been exposed, this has become the ultimate example. You know, as Bill said, we’re occupying—we’re occupying Wall Street because Wall Street is occupying the State Department. So there is a—there’s been a clear connection between, and a conversation between, these campaigns. I don’t think we would have won without Occupy Wall Street. I really—I can’t imagine how we could have. And this is what it means to change the conversation. And that’s why this whole idea—you know, “What are their demands?” and, you know, “What are they trying to accomplish?” There are already victories happening. And this is just one example of it.

What I find exciting is the idea that the solutions to the ecological crisis can be the solutions to the economic crisis and that we stop seeing these as two problems to be pitted against each other by savvy politicians, but that we see them as a single—single—crisis born of a single root, which is unrestrained corporate greed that can never have enough. And that is that mentality that trashes people and that trashes the planet and that would shatter the bedrock of the continent to get out the last—the last drops of fuel and natural gas. It’s the same mentality that would shatter the bedrock of societies to maximize profits. And that’s what’s being protested.

We need to have a coherent agenda here. We need to have a coherent narrative. And then we need to—as the discussion moves forward to what—what do we want to build in the rubble of this failed system? I think that’s the conversation. Not what are your demands, but what do we want to build in the rubble of this failed system? Then, obviously, the solutions have to have the ecological crisis front and center, once we realize that this is—this is the same crisis. And these are where the jobs are. I mean, where else are you going to get millions of jobs but in building massive public transit systems and a smart energy grid and green cooperatives? I mean, where else is this going to happen? So, I’m hoping that this will emerge, and I think it is starting to emerge. And I’m seeing this—you know, there are calls to occupy the food system, to occupy the rooftops for solar energy. So, you know, it’s dispersed right now, but it’s starting to weave together. And I think that will—I think that will take this movement to the next phase, beyond outrage, because we’re in the outrage phase, but we need to get into a hope phase of being able to imagine another economic model.

AMY GOODMAN: Canadian writer and activist Naomi Klein, speaking Thursday night in New York at an event organized by The Nation magazine. She was one of more than 1,200 people who was arrested. She was arrested September 2nd outside the White House, protesting the Keystone XL tar sands pipeline. 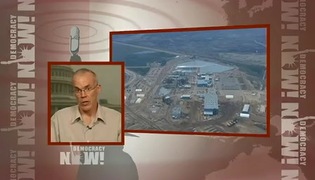