Penn State football coach Joe Paterno, one of the most legendary coaches in U.S. sports history, was fired on Wednesday for his role in allegedly covering up the child sexual abuse of the football team’s former assistant coach, Jerry Sandusky. Penn State president Graham Spanier was also fired. In 2002, Paterno reportedly received an eyewitness account from someone who saw Sandusky raping a young boy in a Penn State locker room. While Paterno told his boss, he did not call the police. Others at Penn State knew about a string of other sexual assaults allegedly committed by Sandusky, but the police were never notified. Last week, Sandusky was charged with sexually abusing eight boys over a 15-year period. During the entire time, Sandusky was running a foundation for troubled kids. The student response to the child rape scandal has surprised many. On Wednesday, students rioted in outrage — not over the school’s role in covering up child rape, but for Paterno’s firing. We speak with political sportswriter Dave Zirin. “What the Penn State students did the other night — rioting, hitting ESPN reporters in the head with rocks, setting fires — and by the way, zero arrests at the end of the night after all the carnage — it stands in stark contrast to the courage of the students occupying their campuses around the country,” Zirin says. “It’s really a tale of two generations that we’re seeing playing itself out on these different campuses.” [includes rush transcript]

In 2002, Paterno reportedly received an eyewitness account from someone who saw Sandusky raping a young boy in a Penn State locker room. While Paterno told his boss, he did not call the police. Others at Penn State knew about a string of other sexual assaults allegedly committed by Sandusky, but the police were never notified. Last week, Sandusky was charged with sexually abusing eight boys over a 15-year period. That’s what we know at this point. During the entire time, Sandusky was running a foundation for troubled kids.

The student response to the child rape scandal has surprised many. On Wednesday, students rioted in outrage, not with the school’s role in covering up child rape, but for firing football coach Joe Paterno. Hundreds also rallied outside Paterno’s house to show support for him. Paterno briefly spoke to the students.

JOE PATERNO: I want to say hello to all these great students, who I love. You guys are great, all of you. When I say “guys,” you know what I mean. You know I mean girls, too. All right? Hey, look, get a good night’s sleep. All right? Study, all right? We still got things to do. All right, I’m out of it maybe now. A phone call put me out of it. But we’ll go from here, OK? Hey, good luck, everybody. Hey, thanks for coming.

JOE PATERNO: Thank you. One thing: thanks, and pray a little bit for those victims.

STUDENTS: Coach! Coach! You are a legend, Joe!

JOE PATERNO: We are Penn State!

STUDENTS: Yeah! We are Penn State!

AMY GOODMAN: That was Penn State coach, the winningest coach, college coach, in the country, Joe Paterno, as he was surrounded by students, students who protested, who rioted on his behalf, overturned a van.

We’re joined right now by sportswriter Dave Zirin. He is author of several books on sports, most recently assisted John Carlos in writing his memoir, The John Carlos Story: The Sports Moment that Changed the World.

You’re writing about this now, Dave. Explain the significance of what’s taking place in Penn State.

Sorry, I can’t hear you, Dave, if—we’re going to try to bring up your audio. And if we—

DAVE ZIRIN: Are we good now?

DAVE ZIRIN: OK. What does this tell us? I mean, Amy, this is the greatest fall from grace in the history of American sports. Nothing compares to this—O.J. Simpson, Pete Rose, Tiger Woods. Nothing compares to what’s happened here at Penn State, because Joe Paterno has held the position of de facto saint. It’s not an exaggeration to say that. He has been the coach there for 46 years. There is a statue of him on campus.

And it has become a company town. That’s what’s been revealed by the events of the last week. Penn State, like many big college towns in this country, has become like an old company town where football is the industry, and students just happen to go to classes in between Saturdays where these games take place. Now, this is a generally depressed part of Pennsylvania. Penn State football brings in $50 million every year into the school, $60 million into the local economy, both formal and informal, every year. And it’s created a situation where Joe Paterno is more like a benevolent czar than he is anything resembling an employee of the campus and of the university.

And I think what the Penn State students did the other night—rioting, hitting ESPN reporters in the head with rocks, setting fires—and by the way, zero arrests at the end of their night after all the carnage—it stands in stark contrast to the courage of the students occupying their campuses around the country. It’s really a tale of two generations that we’re seeing playing itself out on these different campuses.

AMY GOODMAN: Tell us what you know of what has taken place, what the charges are, starting with the 10-year-old boy. Who witnessed his rape?

DAVE ZIRIN: Yeah. Yeah, I’m glad you asked that, because that’s a very important part of the story. It’s 2002, and a young graduate assistant who used to be a quarterback at Penn State named Mike McQueary—he’s six foot six, he weighs well in excess of 240 pounds—he walks into the shower room, according to his testimony, and he sees Jerry Sandusky sodomizing a 10-year-old child—60-year-old Jerry Sandusky—in the showers where the Penn State football players clean off after practice.

Now, what does Mike McQueary do at that point? Does he take Jerry Sandusky and throw him to the ground, or does he call the police? No, he makes a beeline to his father’s house, who’s a local coach in state college, and his father instructs him not to go to the police, but to go to Joe Paterno’s house. So Mike McQueary goes to Joe Paterno’s house, tells him what he saw, and Joe Paterno then, first of all—this is what we know Joe Paterno did—he kicks it up. He says, “OK, well, I’ll report this to the president. I’ll report this to the head of finance and campus police,” which legally was all he was required to do.

And now Mike McQueary is the receivers’ assistant coach at Penn State, which really smells awfully like a kind of quid pro quo, where Mike McQueary was silent about what he saw, and then Joe Paterno was silent about what he saw. This happened in 2002. Jerry Sandusky, his “punishment,” quote-unquote, by the athletic director was then saying, “You are not allowed any longer to bring children into the facilities of the Penn State athletic department.” That was it. No report to the police, which is a violation of state law.

And then Joe Paterno—and this is Joe Paterno’s great moral failing and why it makes me physically sick, the sight of students rallying outside his home—Joe Paterno, St. Joe, was silent throughout the decade as Jerry Sandusky would visit the campus, visit the football team, and bring young children with him when doing this. Jerry Sandusky held a sleepaway camp for small children on the campus as recently as 2008. As recently as a month ago, Jerry Sandusky is working out in the Penn State athletic department, right there in the gym with all the players. And Joe Paterno still said nothing.

AMY GOODMAN: He ran the Second Mile Foundation, Sandusky, where he dealt with little—

AMY GOODMAN: And he—what they did was they took away his key to the locker room. At this point, the issue of the big business that NCAA college football represents, and particularly at Penn State?

DAVE ZIRIN: Yeah, that’s, to me, the story that’s not being told about this, because what this, to me—you can’t talk about this story without also talking about the entire bankrupt economic moral system around which college football exists. This is a multi-billion-dollar business built on the basis of unpaid work. And so, what you have is a constant cycle of amorality that’s dependent upon protecting the system itself. So you have situations where players are handed easy access to women, oftentimes prostitutes. At the University of Colorado a couple years back, it was found that there was a slush fund at a local escort service that was used for the purposes of players. Anything goes.

AMY GOODMAN: Dave, we’re going to leave it there, because we want to—

DAVE ZIRIN: Sure, I understand.

AMY GOODMAN: —go to an issue that you were just talking about: the difference in how the students who rioted at Penn State were dealt with and how the Occupy movement is dealt with. Dave Zirin, sportswriter, thanks for joining us. 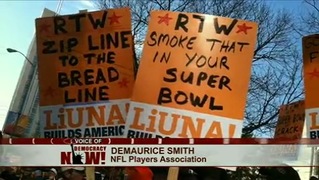