The Senate is set to vote this week on a Pentagon spending bill that could usher in a radical expansion of indefinite detention under the U.S. government. A provision in the National Defense Authorization Act would authorize the military to jail anyone it considers a terrorism suspect—anywhere in the world—without charge or trial. The measure would effectively extend the definition of what is considered the military’s “battlefield” to anywhere in the world, even within the United States. Its authors, Democratic Sen. Carl Levin of Michigan and Republican Sen. John McCain of Arizona, have been campaigning for its passage in a bipartisan effort. But the White House has issued a veto threat, with backing from top officials including Defense Secretary Leon Panetta, Director of National Intelligence James Clapper, and FBI Director Robert Mueller. “This would be the first time since the McCarthy era that the United States Congress has tried to do this,” says our guest, Daphne Eviatar of Human Rights First, which has gathered signatures from 26 retired military leaders urging the Senate to vote against the measure, as well as against a separate provision that would repeal the executive order banning torture. “In this case, we’ve seen the administration very eagerly hold people without trial for 10-plus years in military detention, so there’s no reason to believe they wouldn’t continue to do that here. So we’re talking about indefinite military detention of U.S. citizens, of lawful U.S. residents, as well as of people abroad.” [includes rush transcript]

AMY GOODMAN: The Senate could vote as early as Wednesday on a Pentagon spending bill that could usher in a radical expansion of indefinite detention under the U.S. government. A provision in the National Defense Authorization Act would authorize the military to jail anyone it considers a terrorism suspect, anywhere in the world, without charge or trial. The measure would effectively extend the definition of what’s considered the U.S. military’s battlefield to anywhere in the world, even the United States.

The measure’s authors, Democratic Senator Carl Levin of Michigan and Republican Senator John McCain of Arizona, have been campaigning for its passage in a bipartisan effort. But the White House has issued a veto threat with backing from top officials including Defense Secretary Leon Panetta, Director of National Intelligence James Clapper, an FBI Director Robert Mueller. The measure was inserted into the full military spending bill after the Armed Services Committee quietly approved it without a single public hearing. Now, Democratic Senate Majority Leader Harry Reid has set Wednesday as a procedural vote day to advance the legislation.

For more, we’re joined by Daphne Eviatar, a senior associate with the Law and Security Program at Human Rights First. On Monday, Human Rights First released a letter from 26 retired military leaders urging the Senate to vote against the measure, as well as against a separate provision that would repeal the executive order banning torture. Daphne Eviatar joins us in the studio today.

Hi. Welcome to Democracy Now! Explain exactly what this legislation is about.

DAPHNE EVIATAR: OK. I mean, first of all, the legislation is 680 pages long, and so one reason this has been able to get through so quietly is that the controversial provisions are just three or four provisions within this huge package. The ones that we’re particularly concerned about are for—specifically the one you mentioned, about creating a system of indefinite military detention within the United States by statute. This is—this would be the first time since the McCarthy era that the United States Congress has tried to do this. And in the '50s, that was actually repealed before it was ever used. In this case, we've seen the administration very eagerly hold people without trial for 10-plus years in military detention, so there’s no reason to believe they wouldn’t do it—they wouldn’t continue to do that here. So we’re talking about indefinite military detention of U.S. citizens, of lawful U.S. residents, as well as of people abroad.

AMY GOODMAN: Here in this country.

DAPHNE EVIATAR: Here in this country.

AMY GOODMAN: U.S. citizens abroad, as well as others abroad.

AMY GOODMAN: And others abroad in this country, as well as U.S. citizens.

AMY GOODMAN: So you’re picked up off the street, and you have no trial, no—

AMY GOODMAN: This is not that you’ve been convicted.

DAPHNE EVIATAR: Suspected. And this is military custody without trial. So, this is, for example, what we have in Guantánamo Bay and at Bagram, only you’re now expanding the battlefield, as you said, to the United States. And explicitly, some members of Congress have said recently, “Yes, the battlefield now is the United States, as well, and the U.S. military ought to be able to operate here, as well.”

And one other point, another very controversial provision in the bill and what the administration has particularly objected to, is the mandatory military custody provision, which would say that anyone suspected of terrorism in any way connected to al-Qaeda would have to be put into military custody. So, the government wouldn’t even have the option. So all these FBI investigations that are thwarting terrorist attacks, or even local police investigations, immediately that would have to be turned over to the U.S. military, and that would be a—it would become a military action here in the United States on U.S. soil.

AMY GOODMAN: How is this constitutional?

DAPHNE EVIATAR: It’s a good question. I mean, it could be challenged constitutionally, but by the time something like this gets to the Supreme Court and we get a decision, it could be years.

AMY GOODMAN: Now, this is a bipartisan bill. You’ve got McCain, Arizona. You’ve got Michigan’s Carl Levin. What are their motivations in this?

DAPHNE EVIATAR: You know, it’s very hard to know. McCain generally is always very interested in getting the military in—he’s obviously very pro-military, he has a military background. But it’s odd to me, because so many people within the military have said this is a terrible idea. So, it makes him look very tough on terrorism, and I think there’s a lot of politics here about looking tough on terrorism. Levin was able to soften the bill in various ways, and that was—so, they cut this deal, again, behind closed doors, as you mentioned earlier. But they haven’t softened it in any substantive way. It still allows for this indefinite military detention.

AMY GOODMAN: What about the Udall amendment?

DAPHNE EVIATAR: The Udall amendment would basically table this. It would say, OK, let’s let the NDAA, which is the defense authorization, the spending bill, go forward. We can—

AMY GOODMAN: I mean, this is a spending bill.

AMY GOODMAN: It’s supposed to be about spending.

DAPHNE EVIATAR: Yeah, yeah. It’s about what the government—what Congress authorizes the government to spend for the military. So, it’s everything. You know, it’s weapon systems. It’s everything. Let that go forward, and something like creating a whole new system of indefinite detention without trial, let’s stop and think about that more. Let’s have hearings. Let’s really study what the implications are before we pass it. That’s what Udall’s amendment would do.

AMY GOODMAN: Who are the military leaders who have signed on to the letter that you released this week?

DAPHNE EVIATAR: Those are retired generals and admirals, very senior people. Many of them are the same people who stood behind President Obama when he signed an executive order on his second day in office banning the use of torture and closing the CIA’s secret prisons. So, many of those same people are saying, “You know what? This is not a good idea. This would disrupt ongoing criminal investigations of terrorism. We shouldn’t have mandatory military custody.”

AMY GOODMAN: If this bill passes, does a person who’s been detained have any recourse?

DAPHNE EVIATAR: Again, you know, it’s not clear. I mean, there’s still the right of habeas corpus. But what we’ve seen is, in the courts, the D.C. Circuit has really gutted that right. They’ve essentially said in their most recent cases—and this is the court right below the Supreme Court—has said you have to presume that the government’s evidence in these cases involving secret intelligence is true. You basically have to give the government the presumption that their evidence is true, which means the government can get away with almost anything, because you can’t test secret intelligence information. So, that whole right of habeas corpus, which is also not the equivalent of a criminal trial—it’s a civil proceeding—really has become gutted.

AMY GOODMAN: Has—will President Obama veto this, if it is incorporated into the bill?

DAPHNE EVIATAR: We’re working a lot with members of the Senate and in Congress, urging them to vote against it. Some senators, even, who have in the—who in the past suggested that they would support this bill, are starting to waver and saying that maybe they won’t support it. They’re starting to understand. We’re really working with these retired military leaders to go out there and explain to people in the Senate, look, this is a bad idea, and here’s why.

AMY GOODMAN: What does this mean for Guantánamo?

DAPHNE EVIATAR: Means—the third provision, which I didn’t have a chance to talk about, is just that it extends the transfer restrictions. It means you can’t transfer anyone out of Guantánamo. And the worst thing, and this is also something that very few people have realized, but Secretary Panetta mentioned this recently, is it would prevent the transfer of detainees out of Bagram in Afghanistan. So we have about 3,000 detainees being detained indefinitely in Afghanistan at the Bagram Air Base. Now, the U.S. wants to withdraw its troops from Afghanistan. This would make it almost impossible to do that, because you wouldn’t be able to transfer these detainees to Afghanistan, because Afghanistan could never meet the conditions that are set out in the bill to accept detainees from the United States.

AMY GOODMAN: Daphne Eviatar, thank you very much for being with us, senior associate, Human Rights First’s Law and Security Program. 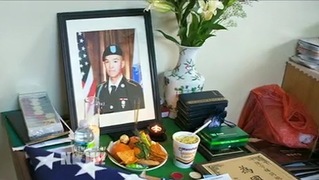