A quarter of a million Indian farmers have committed suicide in the last 16 years—an average of one suicide every 30 minutes. The crisis has ballooned with economic liberalization that has removed agricultural subsidies and opened Indian agriculture to the global market. Small farmers are often trapped in a cycle of insurmountable debt, leading many to take their lives out of sheer desperation. We speak with Smita Narula of the Center for Human Rights and Global Justice at New York University Law School, co-author of a new report on farmer suicides in India. [includes rush transcript]

AMY GOODMAN: We turn to the issue of farmer suicides in India, where a quarter of a million farmers have committed suicide in the last 16 years. On average, that figure suggests one farmer commits suicide every 30 minutes.

The agricultural sector in India has become more vulnerable to global markets as a result of economic liberalization. Reforms in the country have included the removal of agricultural subsidies and the opening of Indian agriculture to the global market. These reforms have led to increased costs, while reducing yields and profits for many farmers.

As a result, small farmers are often trapped in a cycle of insurmountable debt, leading many to take their lives out of sheer desperation. The rate of suicide is highest among cotton farmers. Like other cash crops in India, the cotton industry is increasingly dominated by foreign multinational corporations that tend to promote genetically modified cottonseed and often control the cost, quality and availability of agricultural inputs.

To discuss this issue, we’re joined by Smita Narula, faculty director of the Center for Human Rights and Global Justice at NYU.

AMY GOODMAN: Talk about this report that you are just releasing today.

SMITA NARULA: Our major finding for this report is that all the issues that you just described are major human rights issues. And what we’re faced with in India is a human rights crisis of epic proportions. The crisis affects the human rights of Indian farmers and their family members in extremely profound ways. We found that their rights to life, to water, food and adequate standard of living, and their right to an effective remedy, is extremely affected by this crisis. Additionally, the government has hard human rights legal obligations to respond to the crisis, but we’ve found that it has failed, by and large, to take any effective measures to address the suicides that are taking place.

AMY GOODMAN: I mean, this number is unbelievable. Thirty — every 30 minutes, an Indian farmer commits suicide?

SMITA NARULA: And that’s been going on for years and years. And what these intense numbers don’t reveal are two things. One is that the numbers themselves are failing to capture the enormity of the problem. In what we call a failure of information on the part of the Indian government, entire categories of farmers are completely left out of the purview of farm suicide statistics, because they don’t formally own title to land. This includes women farmers, Dalit, or so-called lower caste farmers, as well as Adivasi, or tribal community farmers. In addition, the government’s programs and the relief programs that they’ve offered fail to capture not only this broad category, but also fail to provide timely debt relief and compensation or address broader structural issues that are leading to these suicides in the country.

AMY GOODMAN: Talk about the issue of globalization and how it’s affecting these farmers.

SMITA NARULA: Sure. So, basically, ultimately, the proximate cause for a number of these suicides is farmer indebtedness. What lies behind that indebtedness is two decades of market liberalization in India, which have resulted in two simultaneous processes. First, the government has withdrawn significantly from the agricultural sector. It has reduced subsidies. It has decreased access to rural credit. Irrigation is insufficient and doesn’t reach most farmers who need it. And at the same time, it has encouraged a switch over to cash crop cultivation, of which cotton is one example.

Simultaneously, the market has been opened up to global competitors, which makes Indian farmers extremely vulnerable. And at the same time, foreign multinationals now dominate industries, such as the cotton industry, including dominating the key inputs that are needed for cotton. In the case of cotton, in particular, the genetically modified Bt cottonseed has been promoted so effectively in India that it now dominates the entire sector, and between its cost, quality and availability, has an enormous impact on farmer costs and profits and yields to the point that it’s landing them in enormous debt. And many of them, ironically, are actually consuming the very pesticide that they went into debt to purchase, to kill themselves when they can’t escape that cycle of debt.

SMITA NARULA: That’s correct. And behind each and every one of these numbers — the statistics are, appalling as they are, every 30 minutes — it’s hard to get our heads around it — but something else that the report tries to do is to put a human face on these numbers and tragedies. So, take two stories to put that humanity back into it. There are farmers in Vidarbha, Maharashtra, which is seen as an epicenter of this crisis, and an epicenter of cotton production in the country. Farmers now address their suicide notes to the prime minister and to the president, hoping that their last words, before they kill themselves, will reach an audience that’s going to take action.

Then you have farmers like Nanda Bhandare, who is a widow, and she lost her husband in 2008. As a result, she had to pull her 10- and 12-year-old children out of school to work the farm. They own seven acres of land, and after toiling every day on that land for a year, she likely won’t earn more than $250 for the entire year. She may have received compensation from the government, but that’s certainly been eaten up by the private moneylenders who her husband took out loans from, because there’s no rural credit in the country. And now she is struggling to afford basic needs for her family.

SMITA NARULA: So, genetically modified seeds. Bt cottonseed is the cottonseed input that dominates the cotton industry now. And what the genetic modification promises to do is to produce a toxin within the seed that kills a very common pest that affects the cotton crop in India. The Bt cottonseed, which is —- has been marketed by Monsanto, among other multinationals, requires two resources that are already scarce for most Indian smallholder farmers. That’s money and water. Bt cottonseeds cost anywhere from two times to 10 times as much as regular cottonseed, and they also require a great deal more water in order to yield successful crops. The farmers often go to private moneylenders, who charge exorbitant interest rates, to purchase the seeds, on the promises and based on aggressive marketing that they will bring greater financial security. But then, because 65 percent of cotton farms in India are rain-fed and don’t have access to irrigation, the crops inevitably fail. And also, increasing drought has made that the case for many farmers. So they’ve gone into insurmountable debt to purchase the inputs. They don’t have the yields. They repeat this cycle for a couple of seasons. And by the end of it, they’re simply trapped in a cycle that they can’t get out of, and they consume the very pesticide that they purchased, in order to kill themselves. And -—

AMY GOODMAN: Finally, what needs to be done?

SMITA NARULA: There are many things that the government can do and should do. The first is to address the failure of information. The government has failed to adequately capture the scope of the problem, as I described before. There is a failure of intervention. The debt relief program, that the government proudly boasts about to human rights committees, doesn’t reach most farmers, leaves many out of their purview, and provides too little. And there are structural issues. The government needs to put human rights at the center of its agricultural policies, and it needs to regulate multinational corporations, which it’s not doing, rather than approving more and more GM crops in the country, when so many have already devastated farmers’ lives.

AMY GOODMAN: Smita Narula, I want to thank you for being with us. We’ll link to your study at our website, from the Center for Human Rights and Global Justice at NYU Law School.

Noam Chomsky: “The U.S. and Its Allies Will Do Anything to Prevent Democracy in the Arab World”

NEXTNoam Chomsky: “The U.S. and Its Allies Will Do Anything to Prevent Democracy in the Arab World” 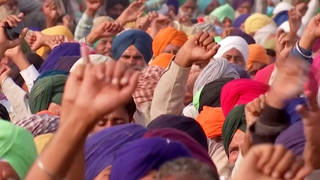