The Obama administration has issued minor criticism of human rights abuses against peaceful protests by President Bashar al-Assad’s regime in Syria and the monarchy in Bahrain. U.S. Secretary of State Hillary Clinton just recently said the conflict in Yemen would end only if President Ali Abdullah Saleh “steps down.” We speak with University of Michigan Professor Juan Cole about why the United States has not been more vocal in supporting these pro-democracy movements in a region of strategic importance. [includes rush transcript]

AMY GOODMAN: Juan Cole, just very quickly, the U.S. position on Syria, Yemen and Bahrain—the U.S. saying, Obama and Clinton saying, that finally, after a long period of time, Saleh should go, but not saying that for Assad in Syria, or in Bahrain, where, in both cases, a number of people have been killed. And in Syria, we’re talking about thousands in jail right now.

JUAN COLE: Yes, well, you know, the Obama administration, I think, came into office wanting to be more pragmatic and more realist than the Bush administration, which had engaged in a lot of highfalutin and often empty rhetoric about democratization. And so, President Obama, you know, wanted to send in—sent an ambassador to Syria after relations had been cut off. He wanted to reach out to people like al-Assad. And these Arab Spring revolts have put him in a difficult position, because the U.S. clearly has a responsibility to stand for the right of people to the peaceably assemble, to protest, to be dissidents. And I think, on the other hand, it’s unknown, if al-Assad were overthrown, who would replace him. It might well be the Muslim Brotherhood. How would that affect the security of U.S. allies? How would it affect Iraq, Israel? So, I think that they’re being cautious. They are putting pressure on al-Assad’s regime with financial sanctions, and they’ve made it very clear that, to the extent that they can take reprisals of those natures, that they will.

With regard to Saleh, they did stand by him for a long time. Again, you know, there’s al-Qaeda in Yemen. There’s been a Shiite revolt among the Houthis. It’s an unstable country. It’s a fragile country. And it is important to the security of the Red Sea and the Arabian Sea, of Saudi Arabia, which is an ally of the U.S. So they’ve been very cautious in these regards. I think it would have been better if they’d been more vocal, if they had come out in favor of democratization of the people.

In Bahrain, they have an ally who leases them a major naval base. They have criticized that ally. They’ve been critical of the Bahrain monarchy for not compromising with its Shiite majority. And that mild criticism has angered Bahrain, and it’s angered Saudi Arabia, but they—at least in public, they haven’t seemed to take a firmer stand than that.

AMY GOODMAN: Well, Professor Juan Cole, I want to thank you for being with us, professor of history at University of Michigan, runs the “Informed Comment” blog, speaking to us from Amsterdam. We’re going to break briefly and then come back to Glenn Carle, the man who just said no, well, to investigating Professor Juan Cole, because he’s written a book called The Interrogator. And we’re going to do part one just to get a quick hit on exactly who he was interrogating at a black site, who he believed at the beginning, and what he came to believe. This is Democracy Now! Thanks, Professor Cole. We’ll be back in 30 seconds. 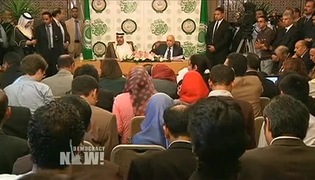