We speak with Glenn Carle, who served 23 years in the Clandestine Services of the Central Intelligence Agency. Carle’s book, “The Interrogator,” has just been published and tells the story of one of the most secret and sensitive CIA interrogations during the “war on terror.” Carle says he took part in the interrogation of a “high-value” al-Qaeda target kidnapped off the streets at an undisclosed site in the Middle East. The book chronicles this interrogation, and Carle says that CIA censors initially tried to redact nearly half of the book’s first draft, which was still published with significant blacked-out omissions. [includes rush transcript]

AMY GOODMAN: We continue our conversation with Glenn Carle, who served 23 years in the Clandestine Services of the Central Intelligence Agency. His book, The Interrogator, has just been published, tells the story of one of the most secret and sensitive CIA interrogations during the so-called war on terror.

In this part one of our discussion, Glenn Carle, just tell us who it was that you were charged with interrogating.

GLENN CARLE: The identity, I can’t reveal. I suspect people will work out who it is. But I was brought into the case because I had been—I was informed that the CIA had detained—rendered, actually; in this instance, kidnapped off a street in the Middle East—one of the half-dozen top al-Qaeda members that the CIA ever obtained—roughly speaking, half-dozen—what we called a high-value target, someone who was quite senior in the organization, so senior that possibly interrogating him and learning what he knew could lead us to Osama bin Laden and seriously disrupt, at the least, al-Qaeda as an organization.

AMY GOODMAN: And where did you interrogate him?

GLENN CARLE: Well, everything I write, of course, to the end of my days, has to be authorized and cleared by the Publications Review Board, by the CIA, so I’m not, also, allowed to say the specific countries where I interrogated him, although I suspect people might work that out, too. But I was sent to him—where he had been sent, rather—to one of the black sites where high-value targets were detained and interrogated. It was in the Middle East.

AMY GOODMAN: We are showing images and will on our website at democracynow.org of the pages of your book. Instead of just going along with the CIA, though you didn’t reveal the information, you showed the blacked-out lines, Glenn, in your book.

GLENN CARLE: Yeah. And actually, although there are a lot of them in the book that you have, initially, I wrote the book—about 100,000 words. Initially, 40,000 words were censored. So I went through two years, really, of increasingly difficult discussions to try to have them put some back in, and I won some arguments and lost many.

AMY GOODMAN: Well, we’re going to continue this conversation off-air. Online at democracynow.org, folks can see part two. And we’re going to broadcast it in the coming days on Democracy Now!, here, on the radio and television broadcast and online at democracynow.org. Glenn Carle, thanks for being with us, served 23 years in the Clandestine Services of the Central Intelligence Agency. His new book is called The Interrogator: An Education. 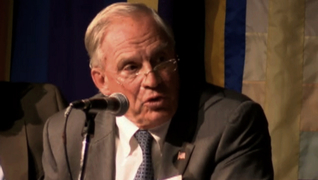