Today the European Union decided to impose sanctions on 18 Syrians in response to the killings of protesters by Syrian forces under President Bashar al-Assad. The move comes after the Arab League formally suspended the Syrian delegation on Saturday over its violent crackdown on eight months of protests. In a new report, Human Rights Watch accused the Assad government of “crimes against humanity” for alleged killings of protesters dating back to April and called on the United Nations to impose an arms embargo on Syria and refer top officials to the International Criminal Court for prosecution. We speak with Bassam Haddad, director of the Middle East Studies Program at George Mason University. He says he opposes external intervention in Syria and calls for non-military action. “The economic sanctions that are taking place targeting particular individuals might [work],” Haddad says. “I suspect that the defection of the business classes from the regime’s ranks is going to continue and increase very rapidly.” [includes rush transcript]

AMY GOODMAN: We continue on Syria with Bassam Haddad, the director of the Middle East Studies Program at George Mason University. His book, Business Networks in Syria: The Political Economy of Authoritarian Resilience, has just been published.

Welcome to Democracy Now!, Bassam Haddad. The significance of what is taking place? And the subtitle of your book, about the resilience of an authoritarian regime—how is Bashar al-Assad remaining in power? Who is supporting him?

BASSAM HADDAD: Well, the book is really about the earlier era, between 1970 and 2005, where the state actually came together with top business elites to literally hijack the economic policy-making process and create a major part of the cause of what we are seeing today, which is the disenfranchisement of most Syrians as a result of the social polarization that these networks created in society between rich and poor, between haves and have-nots, and between regions, which is actually how we found out or how we witnessed the revolt proceed from the countryside, from the periphery, as opposed to the center, which has been severely neglected.

The Syrian regime has actually survived, you know, based on a combination of strategies, including violence, but not limited to violence. It is just that we are getting to the point where the formula has actually broken down as a result of disenfranchisement that most Syrians have actually reached in terms of their ability to make ends meet and, as well, of course, in the absence of any kinds of avenues for redress, for political redress, for acquiring rights or for defending themselves. The Tunisian revolution sparked the Syrian revolt, perhaps at a point where the Syrian situation was not as ripe as, let’s say, Egypt or other places. But I think what we have today is the beginning of the end of the era of the Ba’ath Party rule in Syria.

AMY GOODMAN: How will it end? How do you see that happening, Professor Haddad?

BASSAM HADDAD: Actually, I cannot really answer this question with any credibility. I don’t think anybody can. But if we are to speculate, it does not seem that the Syrian regime is intent or is capable of any genuine compromise, especially after the death toll has reached 4,000 people in Syria.

We have a couple of options. I would not actually, you know, place a lot of emphasis on the Arab League’s decision. On the one hand, it’s important that the Arab League has done that, because it is consequential for other players, in the sense that the Arab League’s decision is a signal or a prelude to some sort of international intervention, which will be detrimental to all parties involved, including the Syrian people, especially if it takes a military dimension or a military tone. So, on the one hand, this is basically still an open game; on the other hand, the regime of—the violence of the Syrian regime must be condemned with the strongest possible language.

One wonders, however, who are the actors that are going to bring about an end. All the actors involved, including the Arab League and the member states—ultimately, the Arab League is a club of autocrats and oligarchs that are not actually fit to push for this kind of a resolution. They themselves have actually oppressed their own people, and they have now basically shown that there is this desire to end the violence in Syria, but it is not clear how they would actually themselves deal with their own people in the case of a revolt.

But I do see some sort of an end in the coming months, if not weeks, that might involve, actually, some sort of economic crisis inside Syria, in terms of funding the—funding this oppression of the revolution. There will come a point in the next few months, and one hopes much earlier, where this will become an internal debate within the Syrian regime, because it’s going to cost ever more to actually continue this oppression, and that might spark some sort of compromise internally. But besides that, it seems like the Syrian regime is intent on fighting ’til the end, ’til death.

AMY GOODMAN: Can you talk further about the possibility of external intervention? And what would it mean for the people of Syria?

BASSAM HADDAD: Basically, external intervention can take many forms. If it does take a military form, it will—as I said, no one will win, and the Syrian people themselves will actually be the biggest losers. The talk of external intervention in the Arab League’s decision, which might be a prelude to external intervention, and the Arab League’s decision to speak on behalf of democracy, is in many ways extremely hypocritical. It is almost like—it’s basically like Israel speaking on behalf of equal rights or the United States speaking on behalf of international law. I do not feel that this kind of approach is likely to lead to a resolution, at the same time that it seems like a dead end without some sort of external threat, at least. And I think that threat should take forms that are non-military.

The economic sanctions that are taking place targeting particular individuals might, as we have been listening and seeing and reading. In the cases of Aleppo, there is a slow drain of business people that have been supporting the regime early on, but now they are basically defecting, so to speak, in a very silent manner. I suspect that the defection of the business classes from the regime’s ranks is going to continue and increase very rapidly. And it is very difficult to tell when the breaking point will be. But it seems that the best scenario for some sort of—and this is a cold analysis, of course—but the best scenario for some sort of conclusion here would have to be serious economic pressure that will cause or force the regime to reevaluate its priorities.

AMY GOODMAN: And what do you think the U.N. should do, and the U.S.?

BASSAM HADDAD: The United States and the U.N. are—I mean, they’re different things, or they should be different things, but I feel that the most that international—the international environment or the international community, so to speak—because I, you know, have an issue with the international community question—but they must continue to apply diplomatic pressures, economic pressures and sanctions. And if anything, if there is any sort of idea of deployment of peacekeeping forces, I think any non-Arab peacekeeping forces or any non-Arab military intervention of any sort will actually exacerbate the situation to the detriment of the Syrian people.

AMY GOODMAN: I wanted to ask you, as a director of the Middle East Studies Program, in general, at George Mason, about the increasing tension with Iran—the reports that 17 members of the Iranian Revolution Guard died Saturday in a massive explosion at an ammunitions depot west of Tehran, the dead including General Hasan Moghaddam, a key figure in Iran’s missile program, the explosion destroying the base which housed Iran’s stockpile of Shahab missiles, a missile capable of reaching Israel. Time magazine is quoting an unnamed Western intelligence source saying the Israeli spy agency Mossad carried out the attack.

BASSAM HADDAD: We do not know exactly, you know, the details or what happened in Iran. But in relation to our discussion, the situation in Iran is going to, perhaps, affect what is going on in Syria in indirect ways. We have seen, in the past week or so, threats coming from Israel regarding Iran’s alleged nuclear weapon building, and it seems that this situation, as it percolates, might lead to some sort—might flare up into something that is unanticipated, something of a, perhaps, small skirmish or confrontation, and a response from Israel that might actually spin the entire situation out of control, which actually, ultimately, will end up supporting the Syrian regime, because it will detract attention from what’s happening in Syria and create the kind of regional mayhem that, actually, we’re trying to avoid by talking about or by—myself, in this case—discussing the perils of international intervention. But besides that, I will not speculate much more about this incident. It’s too early.

AMY GOODMAN: Bassam Haddad, I want to thank you for being with us, director of the Middle East Studies Program at George Mason University. His book is just out, called Business Networks in Syria: The Political Economy of Authoritarian Resilience. 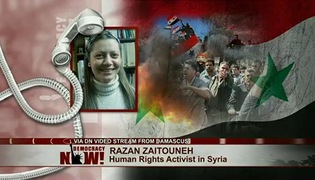