Democracy Now! correspondent Sharif Abdel Kouddous was on site in Cairo today as former Egyptian president, Hosni Mubarak, appeared in court for the first time to face allegations of corruption and the killing of protesters during the uprising that overthrew his rule. The trial has been adjourned until August 15. “Today was really a defining moment in the Egyptian revolution, a defining moment in Egypt’s history,” Sharif says. [includes rush transcript]

AMY GOODMAN: As we wrap up now, we go to Cairo, where the former Egyptian president, Mubarak, has appeared in court for the first time to face allegations of corruption and killing of protesters. We’re joined on the phone by Democracy Now! correspondent Sharif Abdel Kouddous, who was just outside the trial.

Sharif, we just have a minute. Tell us what’s happened today.

SHARIF ABDEL KOUDDOUS: Well, Amy, today was really a defining moment in the Egyptian revolution, a defining moment in Egypt’s history. Hosni Mubarak appeared in court. Many did not expect him to, but he was brought out with his two sons and several others who are standing trial on charges of corruption, on charges of killing of protesters. There was a few hundred people gathered outside the courtroom, which is on the desert outskirts of Cairo. I spoke with many members of—family members of those killed in the revolution. And without fail, all of them were overjoyed that Mubarak appeared today in court. The trial has been adjourned until August 15th. It will be followed very closely and is being broadcast on state TV. But it was a seminal moment in Egyptian history today.

AMY GOODMAN: Sharif, thanks for that report, and we’ll get more from you in the coming days. Sharif Abdel Kouddous, Democracy Now! correspondent in Cairo. 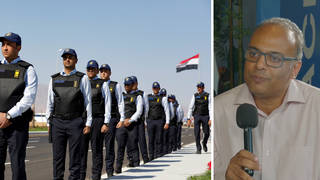