It was 40 years ago this week when New York state police raided the prison in Attica, New York, ending a prison uprising to protest inhumane conditions at the facility. On Sept. 13, 1971, then-New York Gov. Nelson Rockefeller ordered armed state troopers to raid the prison. Troopers then shot indiscriminately some 2,000 rounds of ammunition. In the end, 39 men would die: 29 prisoners and 10 guards. After the shooting stopped, police beat and tortured scores of more prisoners. Newly uncovered audio recordings reveal that President Richard Nixon enthusiastically supported the violent operation when he spoke by phone with Rockefeller on the day of the raid. Rockefeller confides in Nixon that before the raid, he thought it was possible that as many as 300 prisoners could be killed, but went ahead with the operation anyway. Throughout the tapes, Nixon discusses the racial component of the uprising, describing the prison rebellion as “basically a black thing.” Nixon would go on to erroneously state that all of the victims of crackdown were African American, downplaying the multiracial leadership within Attica at the time of the uprising. We speak to University of New Hampshire at Manchester historian Theresa Lynch, who helped disclose the tapes. [includes rush transcript]

AMY GOODMAN: Newly uncovered audio recordings reveal President Richard Nixon enthusiastically supported the violent operation when he spoke by telephone to New York Governor Rockefeller on the day of the raid. Rockefeller confides in the President that before the raid he thought it was possible as many as 300 prisoners could be killed, but went ahead with the operation anyway. This tape was obtained by University of New Hampshire at Manchester historian Theresa Lynch.

OPERATOR: I have Governor Rockefeller for you, sir.

OPERATOR: There you are.

PRESIDENT RICHARD NIXON: I know you’ve had a hard day, but I want you to know that I just back you to the hilt, and I was sitting here talking to Bob Haldeman. I didn’t get your call because I’ve had a Cabinet meeting, and then I had a meeting with business leaders right afterwards, and I’ve been—I just got out. But the courage you showed and the judgment in not granting amnesty, it was right, and I don’t care what the hell the papers or anybody else says. I don’t care what they say. I think that you had to do it that way, because if you would have granted amnesty in this case, it would have meant that you would have had prisons in an uproar all over this country.

PRESIDENT RICHARD NIXON: And you did the right thing. It’s a tragedy that these poor fellows were shot, but I just want you to know that’s my view, and I’ve told the troops around here they’re to back that right to the hilt.

GOV. NELSON ROCKEFELLER: Well, aren’t you great, Mr. President. I only called you because I wanted to alert you that we were going in.

GOV. NELSON ROCKEFELLER: And when we went in, we couldn’t tell whether all 39 hostages would be killed and maybe two or three hundred prisoners.

JUAN GONZALEZ: Throughout the tapes, President Nixon discusses the racial component of the uprising, describing the prison rebellion as, quote, “basically a black thing.” Nixon would go on to erroneously state that all of the victims of the crackdown were African American, downplaying the multiracial leadership within Attica at the time of the uprising.

PRESIDENT RICHARD NIXON: Tell me this, is this—are these primarily blacks that you’re dealing with?

GOV. NELSON ROCKEFELLER: Oh, yes, the whole thing was led by the blacks.

PRESIDENT RICHARD NIXON: I’ll be darned. Are all the prisoners that were killed blacks? Or are there any whites?

GOV. NELSON ROCKEFELLER: I haven’t got that report, but I have to—I would say, just offhand, yes.

PRESIDENT RICHARD NIXON: You had to do it.

GOV. NELSON ROCKEFELLER: And otherwise we recaptured all the cell blocks and so forth without shooting a shot. And no troopers were wounded. One of them—well, one of them was in the leg. But—

PRESIDENT RICHARD NIXON: Only one trooper was wounded?

GOV. NELSON ROCKEFELLER: It really was a beautiful operation.

To discuss these tapes, we’re joined now by the historian who shared them with Democracy Now! Theresa Lynch is at the University of New Hampshire, Manchester, obtained the Nixon-Rockefeller tapes on Attica and, together with her colleague, Scott Christianson, helped publicize them.

When you have the President of the United States, Nixon, the Governor of New York at the time, Rockefeller, talking about prisoners attacking the guards, the fact is, it turned out, that it wasn’t prisoners who killed any of the guards. It was the state trooper raid, on that day, September 13, 1971, that killed all the prisoners and guards, all 39. Talk about the significance, Theresa Lynch, of these tapes and how you actually uncovered them.

THERESA LYNCH: Well, I think the tapes illustrate how Nixon was willing to back Rockefeller publicly and within the White House. I obtained the tapes in 2004 from the National Archives Records Administration in Maryland. The tapes also demonstrate how Nixon and Rockefeller were willing to make assumptions. And more broadly, they show how they were willing to flex their muscles and be tough on crime. They’re also a window into the intersection between politics and power.

AMY GOODMAN: I want to go to another clip, Nixon and Rockefeller discussing how to manage the media coverage of Attica. In this clip, they mention Tom Wicker, the former political reporter/columnist for the New York Times.

PRESIDENT RICHARD NIXON: What the hell is Tom Wicker doing in this thing?

GOV. NELSON ROCKEFELLER: Well, you won’t believe it, that we had a—we had a committee of citizens, invited by the prisoners, 32 of them. Tom Wicker was one. We had that Kunstler, that lawyer.

PRESIDENT RICHARD NIXON: Yeah, yeah, I know of him.

GOV. NELSON ROCKEFELLER: We had the head of the Mau Maus [inaudible]. A motley crowd.

GOV. NELSON ROCKEFELLER: And some good people, some legislators. And Tom Wicker was so emotional in this thing—

GOV. NELSON ROCKEFELLER: —that it was unbelievable.

PRESIDENT RICHARD NIXON: Which side?

GOV. NELSON ROCKEFELLER: Oh, on their side.

GOV. NELSON ROCKEFELLER: You see, I had, at the end—they were putting the pressure yesterday on me all day to go up there. Ended up—because everything else had failed and—

PRESIDENT RICHARD NIXON: Did you go?

GOV. NELSON ROCKEFELLER: Of course not. I wouldn’t go.

PRESIDENT RICHARD NIXON: No, of course not.

GOV. NELSON ROCKEFELLER: But I had to talk to these guys, Wicker and all these people, on the phone. You know.

GOV. NELSON ROCKEFELLER: And I said, “Look, I go up there. We can’t give amnesty. The next thing is, 'Well, we'll let them go, if you’ll just come into the courtyard.’”

GOV. NELSON ROCKEFELLER: With—in front of all the men. Well—

JUAN GONZALEZ: That was Governor Rockefeller and President Nixon in this discussion that they were having about Tom Wicker. I’d like to ask you, in terms of when you discovered the tapes, because it appears that Nixon tapes keep appearing. How—where precisely did you discover these tapes and no one had seen them before? And also, could you talk about the way that Attica changed Nelson Rockefeller, Professor Lynch, how Attica changed Nelson Rockefeller, who had always been seen as a moderate Republican—in fact, there was a Rockefeller Republican wing of the party—and how this began to actually change him and transform forever his legacy?

THERESA LYNCH: Well, I think it changed Rockefeller, on the one hand. And to some, it was a feather in his cap. And for others, it was—it was—I’m sorry, I wasn’t expecting that question. But—

AMY GOODMAN: Let me go—let me go to another clip, the tapes revealing that Nixon believed Attica would serve as a deterrent. In this clip, Nixon speaks to John Ehrlichman, counsel and assistant to the President for domestic affairs. Nixon downplays the idea that the Black Panthers will launch reprisal attacks after Attica.

PRESIDENT RICHARD NIXON: Did you have some idea that we ought to take some preventive actions in some of the federal prisons?

JOHN EHRLICHMAN: Well, we’ve already alerted the prisons through the attorney general. And so, they’re all on a kind of a standby basis.

PRESIDENT RICHARD NIXON: Well, I would think, John, that what happened in New York, rather than stimulating more, is likely to, you know, have an effect that could be quite the opposite.

JOHN EHRLICHMAN: A deterrent. Well, the concern that Rockefeller had was that Seale and some of the Black Panthers who had been up there came out and said to the press, “If any harm comes to any of these prisoners, why, we’re going to blow up other prisons around the country.”

PRESIDENT RICHARD NIXON: I see. That’s what he told you this morning.

JOHN EHRLICHMAN: So I passed that along to the attorney general, who in turn alerted his assistant.

PRESIDENT RICHARD NIXON: Right, they won’t—I don’t think they will. I may be wrong, but I think Rockefeller had to do what he did.

AMY GOODMAN: That was President Nixon speaking with John [Ehrlichman]. Professor Theresa Lynch, your final comments on what you discovered in these tapes?

THERESA LYNCH: Well, I think the tapes resonate still with many Americans. They do fuse issues of race, class and power. And I think they’re an interesting window into the Nixon White House.

AMY GOODMAN: Well, I want to thank you very much for being with us, Theresa Lynch, historian at the University of New Hampshire, Manchester, obtained the Nixon-Rockefeller tapes on Attica, together with her colleague, Scott Christianson. 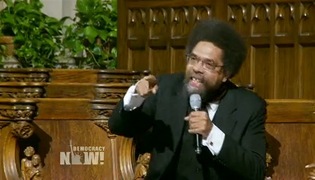