This week marks the 40th anniversary of another 9/11 tragedy: the Attica prison rebellion. On September 9, 1971, prisoners took over much of state prison in Attica, New York, to protest conditions at the maximum security prison. Then Governor Nelson Rockefeller ordered state police to storm the facility on the morning of September 13. Troopers shot indiscriminately more than 2,000 rounds of ammunition, killing 39 male prisoners and guards. After the shooting stopped, police beat and tortured scores of more prisoners, many of whom were seriously wounded but were initially denied medical care. After a quarter century of legal struggles, the state of New York would eventually award the surviving prisoners of Attica $12 million in damages. We play an excerpt from a September 9 commemoration at Riverside Church in New York City, “Attica Is All of Us,” featuring Cornel West, professor of religion and African American studies at Princeton University and the author of numerous books on race. “So, 40 years later, we come back to commemorate this struggle against the historical backdrop of a people who have been so terrorized and traumatized and stigmatized that we have been taught to be scared, intimidated, always afraid, distrustful of one another, and disrespectful of one another,” West says. “But the Attica rebellion was a countermove in that direction.” [includes rush transcript]

AMY GOODMAN: We turn now to another 9/11 milestone. This week marks the 40th anniversary of the Attica rebellion. Forty years ago, September 9th, 1971, prisoners took over much of Attica prison in upstate New York to protest the prison conditions. Four days later, on the morning of September 13th, Governor Nelson Rockefeller ordered state troopers to storm the prison. Troopers shot indiscriminately over 2,000 rounds of ammunition. Thirty-nine men would die—prisoners and guards. After the shooting stopped, police beat and tortured scores more prisoners. Ninety of the surviving prisoners were seriously wounded but were initially denied medical care. After a quarter century of legal struggles, the state of New York would eventually award the surviving prisoners of Attica $12 million in damages.

Well, this past Friday night, close to 3,000 people gathered at Riverside Church in New York to remember Attica. Among them, Cornel West, professor of religion and African American studies at Princeton University and author of numerous books. He talked about 40 years ago and today.

CORNEL WEST: I want to begin by thanking Brother Phelps, Reverend Phelps, for this space in this prophetic church. I want to begin by thanking Sister Sarah Kunstler for her vision of bringing us together. We shall never forget our dear brother William Kunstler, his love, his courage, his vision, his sacrifice. And any time I get a chance to set my eyes on the artistic genius and literary jazzman Amiri Baraka, it just extends years to my life. It’s a blessing to have you here. And for the brothers who spoke so eloquently, whose voices consecrated this evening, resilience, resistance. And when I saw you take the picture together, I could see Nat Turner and John Brown. Oh, yes. Oh, yes. I could see the workers’ movement in the 1890s. I could see the brothers and sisters on the corner in Watts 1965, in Detroit in '67, in Newark in ’67, and 212 rebellions the night Brother Martin Luther King was shot down like a dog one year after he gave his “Beyond Vietnam” speech to bring poor people together, bring a critique to bear on the viciousness of American imperialism. That's what we’re talking about here. That’s what we’re talking about here.

So, 40 years later, we come back to commemorate this struggle against the historical backdrop of a people who have been so terrorized and traumatized and stigmatized that we have been taught to be scared, intimidated, always afraid, distrustful of one another, and disrespectful of one another. But the Attica’s rebellion was a countermove in that direction. I call it the niggerization of a people, not just black people, because America been niggerized since 9/11. When you’re niggerized, you’re unsafe, unprotected, subject to random violence, hated for who you are. You become so scared that you defer to the powers that be, and you’re willing to consent to your own domination. And that’s the history of black people in America. That’s the history of black people in America.

Any time you look the terror in the face and you deal with the trauma, even if maybe all you could do is sing a song—and let us never forget, the summer of 1971, the number one album in America was “What’s Going On” by a genius named Marvin Gaye. What’s going on? Who really cares? Save the babies. What’s happening, brother? And Donny Hathaway was on the sideline, and so was Nina Simone, and so was Gil Scott-Heron, and so was Pharoah Sanders and Miles Davis and others. You had a whole context in which you could look the terror and trauma and stigma in the face and say, “We gonna stand,” the way Sly Stone said “Stand” that same year, in his album. That’s what we’re talking about.

And we live now in revolutionary times, but the counterrevolution is winning. The counterrevolution is winning. The greedy oligarchs and plutocrats are winning. One out of four corporations don’t pay taxes, been gobbling up billions of dollars. And yet, not just 21 percent of our children living in poverty, of all colors, each one precious, 42 percent of America’s children live in poverty or near poverty. That is sick. It’s a moral obscenity. It’s a national disgrace. And yet, we have a political class, no matter what color they are, that won’t say a mumbling word about that poverty. Why? Because it sits outside of the give and fro between a right-wing, mean-spirited Republican Party, run by the oligarchs and the plutocrats, and a spineless Democratic Party, that’s got ties to the oligarchs and plutocrats, and the poor people get left out. They get invisible, disposable.

And yet, we see the same brothers in the 1950s and '60s who were coming out of socially neglected and economically abandoned spaces, called “the ghetto” by Donny Hathaway. By Donny Hathaway, when he said “ghetto,” that wasn't demeaning. If you’re from the ghetto, the way he talked about it, you straightened your back up. You got your mind together. You had love in your heart for your brother and sister on the block. And it started on the chocolate side of town, but it spilled over to the vanilla side and the red side and the yellow side and the brown side, too. The unity that we had in Attica among the black and brown—and I saw some white brothers, too. Oh, yes. And that’s elementary. You’ve got to have the unity, but you’ve got to be honest about the powers that be dividing and conquering. And this revolutionary moment, where the counterrevolution is winning. Every time I look at Brother Dhoruba—Brother, I’ve been so inspired by you for 25 years, because you’ve been talking the same thing I’m talking about right now. Same language, here and Africa. We had a good time in Ghana together. Oh, yes, we did. But now it’s coming back. It’s coming back.

But the sad thing is—and I’m going to end on this—the sad thing is, the kind of courage that these brothers had in 1971 is in short supply. It’s in short supply. Because when you bring together the national security state and the military-industrial complex, when you bring together the prison-industrial complex and all the profits that flow from it, when you bring together the corporate media multiplex that don’t want to allow for serious dialogue—unless we got Sister Amy or Brother Tavis and some others—and then, when you bring together the Wall Street oligarchs and the corporate plutocrats, and they tell any person or any group, “If you speak the truth, we’ll shoot you down like a dog and dehumanize you the way we did to dehumanize the brothers in Attica,” the only thing that will keep you going is you better have some love in your heart for the people. That’s the only thing that will keep you going, the only reason why the long-distance runner Dhoruba, the only reason why Baraka is a long-distance runner. I don’t care if you agree with them ideologically or not. It doesn’t make any difference. They got enough love for the people in their heart to still tell the truth about poverty, about suffering, about struggle, and be able to look—not just presidents, because by presidents you’re just talking about the placeholder of the oligarchs and the plutocrats—I don’t care what color they are—to tell that truth. And most people, they hold off on that. They say, “No, I got one life, one life. I saw what they did. I saw what they done.”

AMY GOODMAN: That was Princeton University professor, Dr. Cornel West, speaking before close to 3,000 people, part of two panels at the Riverside Church in New York remembering Attica 40 years ago and talking about a blueprint for accountability today. 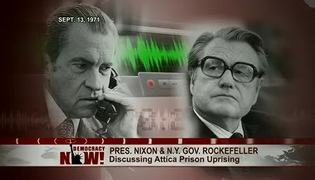