“They Just Started Shooting Us from Everywhere”: Scores of Protesters Killed in Yemen

In Yemen, the government’s violent crackdown on protesters has intensified, leading to the bloodiest two days in several months. At least 21 protesters have been killed today in the capital of Sana’a. On Sunday, 26 demonstrators were gunned down, and hundreds were injured. Demonstrators are calling for an end to President Ali Abdullah Saleh’s 33-year rule as he has repeatedly broken promises to step down. Last week, Saleh authorized his vice president to negotiate a transfer of power with the opposition. The initiative was proposed by the six-nation Gulf Cooperation Council and sets the path for a peaceful transition of power from Saleh, who has ruled Yemen since 1978. We go to Yemen for an update from Abdul-Ghani al-Iryani, a political analyst based in Sana’a and co-founder of the Democratic Awakening Movement. [includes rush transcript]

AMY GOODMAN: We turn now to what’s taking place in Yemen. In Yemen, the government’s violent crackdown on protesters has intensified significantly over the last 48 hours. At least 21 protesters were killed today in the capital of Sana’a. The numbers might be much higher. On Sunday, 26 demonstrators were gunned down, hundreds injured. It’s been the bloodiest two days in several months. Demonstrators are calling for an end to President Ali Abdullah Saleh’s 33-year rule.

WALID AL AMARI: [translated] We were on the march, walking in a peaceful manner. We got to around the Al Ga’a, and suddenly a vehicle of the central security force appeared and opened fire with a water cannon, spraying us. Then they just started shooting us from everywhere. We were at the head of the march. Our car was targeted by medium or heavy machine gun. The person next to me had his face ripped in half, and I was hurt by some shrapnel.

AMY GOODMAN: Hundreds of people are being treated for gunshot wounds and tear gas inhalation. Anti-government protesters have grown increasingly frustrated over President Saleh’s refusal to resign. He has repeatedly broken promises to step down. Last week, Saleh authorized his vice president to negotiate a transfer of power with the opposition. The initiative was proposed by the six-nation Gulf Cooperation Council and sets the path for a peaceful transition of power from Saleh, who has ruled Yemen since 1978.

For more on the situation in Yemen, we’re joined on the phone by Abdul-Ghani al-Iryani, a political analyst based in Sana’a, co-founder of the Democratic Awakening Movement.

You have just come from outside the protests in the streets of Sana’a. Can you describe what is happening there?

ABDUL-GHANI AL-IRYANI: The situation is quite tense, the protest square and the areas around it. A lot of shooting, high-caliber gunfire all over the place. Most of the shooting seems to be directed at soldiers from both sides. There’s also shelling of—mortar shelling and maybe bazookas and RPGs. But there are large explosions in different areas of that neighborhood. My impression is that the shelling is being exchanged between the soldiers of General Ali Mohsen, the defecting army general, and loyalists of Ali Abdullah Saleh.

ABDUL-GHANI AL-IRYANI: Obviously, democracy is not welcome by Saudia Arabia. However, the situation is in such tension that they are afraid for their own security, and therefore, they want to extinguish the fire in Yemen and keep the situation stable. And if that requires concessions in favor of democracy and popular protestation, they can live with that.

AMY GOODMAN: Can you describe who the protesters are? And how widespread are these protests? Do they go beyond Sana’a?

ABDUL-GHANI AL-IRYANI: The protesters—I think everyone, every group of society, is well represented in the protests. The protesters come from—they started from Sana’a University, and that’s why the protest ground, the camping, sit-in ground, is by Sana’a University. But then it has spread all over the country. There are 17 different protest squares in the country. And in days when people come out en masse, there are hundreds of thousands in these protest squares. In one prayer a few weeks ago, I estimated the crowd to be over 250,000 people. And that represents nearly 60 percent of the age group of the entire city. So that’s a very, very wide protest.

AMY GOODMAN: We have heard reports that Saudi Arabia is sending military equipment, including tanks, to quell the protests, as they did in Bahrain. Do you see this on the streets, Abdul-Ghani al-Iryani?

ABDUL-GHANI AL-IRYANI: They are everywhere. Unfortunately, Saudis will not—did not calculate the PR effect of these, of that assistance. Their equipment is now being used against peaceful protesters. They’re not tanks; they are armored personnel carriers and various types of armored vehicles. Unfortunately, they have not been used for a good purpose since they have arrived in the country. That is not good for Saudi Arabia.

AMY GOODMAN: We just got this report a minute ago that opposition activist, Dr. Mohamed Qubaty, a former adviser to the Yemeni prime minister, told BBC’s Tim Willcox that Yemen is “close to total chaos.” Would you agree with that assessment?

ABDUL-GHANI AL-IRYANI: No, I think the political process is still going. And as long as people are talking to each other, then we will—there’s a light at the end of the tunnel. My guess is that within the next 24, 48 hours, the two sides will sign a political document that will signal the transfer of power. And that signing, I think, will stop the fighting, because the fighting started, in the first place, to try to obstruct the signing of this document. As soon as the document is signed, I think the fighting will die down.

ABDUL-GHANI AL-IRYANI: It would be such an unfortunate development if it happens. You see, Yemen has always looked to the United States to support its democratic movements. And we’ve had a lot of very good assistance in political construction in Yemen from the United States. Unfortunately, this then is undermined by the Palestinian issue and clear and unequivocal bias of U.S. political establishment against Palestinian people. It is an unfortunate event. But as it stands today, it’s not at the top of our list of priorities.

AMY GOODMAN: Abdul-Ghani al-Iryani, I want to thank you for being with us. We will continue to cover what is taking place in Yemen. Our guest, co-founder of the Democratic Awakening Movement, joining us on the phone from Sana’a, Yemen. 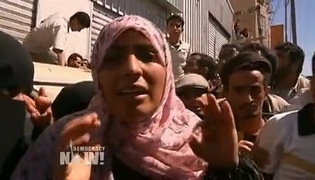