In an interview, Yemeni activist Tawakkul Karman said her Nobel Peace Prize is a victory for Yemen and for all of the uprisings of the Arab Spring. Karman is a 32-year-old journalist and the head of the Yemeni nonprofit group Women Journalists Without Chains. She was detained for a time during the political unrest earlier this year. She is the first Arab female to win the Nobel Peace Prize and is believed to be the youngest winner of the peace prize to date, slightly edging out the Irish activist Mairead Corrigan, who won in 1976. We get reaction from British journalist Iona Craig, who has been closely following the uprising in Yemen. “This Nobel Peace Prize will actually in some ways go towards protecting her. Now she will become an even greater international figure and certainly if the regime sought to detain her again, I think they would create a huge problem for themselves,” Craig says. [includes rush transcript]

AMY GOODMAN: In an interview this morning, Yemeni activist Tawakkul Karman said her prize is a victory for Yemen and for all of the uprisings of the Arab Spring. Karman is a 32-year-old journalist and head of the Yemeni NGO Women Journalists Without Chains. She was detained for a time during the unrest. This is a clip of her speaking just after her release from prison in January.

AMY GOODMAN: Tawakkul Karman is the first Arab woman to win the Nobel Peace Prize and is believed to be the youngest winner of the peace prize to date, slightly edging out the Irish activist Mairead Corrigan, who won in 1976. Both were 32.

For Liberian President Ellen Johnson Sirleaf, the award comes as she wraps up her reelection campaign. Voters in Liberia head to the polls Tuesday.

Leymah Gbowee’s Women for Peace movement is credited by some for bringing an end to the civil war in 2003. The movement started humbly in 2002 when Gbowee organized a group of women to sing and pray for an end to fighting in a fish market. She is a subject of an award-winning documentary film, Pray the Devil Back to Hell.

The trio of laureates follow only a dozen other women among 85 men, as well as a number of organizations, to have won the peace prize over its 110-year history.

To talk more about this year’s Nobel Peace Prize, we’re joined by two guests. In a moment, we’ll be going to Emira Woods, co-director of Foreign Policy in Focus at the Institute for Policy Studies in Washington, D.C., originally from Liberia. And with us from Britain is the British journalist Iona Craig, who’s been closely following the uprising in Yemen.

Let us start with the Yemeni winner of the Nobel Peace Prize, Tawakkul Karman. Iona Craig, tell us who she is.

IONA CRAIG: Well, I first met Tawakkul last year when she was, then, a thorn in the side of the government, working as a human rights activist and the president of Women Journalists Without Chains. She has always been a very outspoken character, fighting for the rights of press freedom and for political prisoners in Yemen. So this prize is an acknowledgment of that, as well as her leading role in Yemen’s unrest since January.

IONA CRAIG: As you say, it’s particularly significant as a woman. She’s very outspoken. She’s led demonstrations, even in years gone by, leading up to the time of Yemen’s unrest, which began in January. And she has inspired a lot of women as a result. She has fought very hard for press freedom in Yemen, and she has also fought, as I said before, for political prisoners and for journalism, in general, within the country. She is a very forceful female, and many women have followed in her footsteps as a result now over the last seven months and have really found their voice and will now want to be part of a new Yemen, part of this new democratic process. They don’t want to be forgotten as this, hopefully, transition happens in the months ahead.

IONA CRAIG: Yeah, this was an NGO that she set up, not just to fight for the rights of women, but also for press freedom in Yemen. The press in Yemen have a huge amount of restrictions imposed on them, particularly Yemen journalists. I met her, initially, at the trial of a Yemeni journalist, Abdul-Elah Haidar Shaye, who was then sentenced to five years in prison, supposedly for connections to al-Qaeda. He was the—he had, at the time, pinpointed U.S. involvement in drone strikes in Yemen, and it appeared at the time that he was perhaps being punished for that. He has since been, as I say, sentenced to five years, and she was fighting very hard for him and on his behalf to try and get him released. There are many prisoners in Yemen who are often taken from their houses without any representation from lawyers or without any contact from their family, and these political prisoners she has sought to fight for since 2005, when she founded this organization, to try and get representation for them and for them to receive a fair trial in Yemen. So she’s been organizing demonstrations outside the parliament in Sana’a on a weekly basis for many years now.

AMY GOODMAN: How much of a threat does Saleh consider her, and what will this mean? How much of a boost will this give the opposition movement in Yemen, for both Yemen and the Saudi regime that is supporting Saleh’s return and the Saleh regime in Yemen?

IONA CRAIG: I think it will be a huge boost for them. As she said in her interview today, this is an award that she dedicates to the Yemeni youth movement and to all Yemenis and to all youth across the Arab world. Yemenis, particularly the activists in Sana’a and in Taiz, feel that they haven’t received recognition for their peaceful demonstrations that have now been going on for the best part of nine months. So, I’ve spoken to many of them in Sana’a today, and they’re certainly celebrating this award, and they see it as a recognition for their peaceful efforts as activists, as a group, as well as for—as recognizing Tawakkul herself.

Certainly, the regime did see her as a threat. This is why she was arrested in January. But her arrests sparked further protests. And I think they quickly realized that it was better for them to release her than to detain her, which would have caused further problems. I think, if anything, this Nobel Peace Prize will actually—in some ways, may go towards protecting her. Now she will become an even greater international figure. And certainly, if the regime sought to detain her again, I think that they would create huge problem for themselves. But certainly, it’s a great day for the movement in Yemen, as they see it.

AMY GOODMAN: And what does this say for the men of Yemen? What does it mean in a very much male-dominated culture?

IONA CRAIG: They have largely, although there have been some divisions in the movement about her role, accepted her as this leading figure, and a lot of women, as well. As I mentioned before, a lot of women have now come forward and are speaking out, have been speaking to large crowds of male demonstrators. But it’s also encouraged the women to come out on the street at the same time. There have been thousands of women that have come out to demonstrate on a regular basis now on the streets as a result of her presence. So, yes, the men are equally inspired by her activity and also have been largely willing to accept her role.

AMY GOODMAN: Iona, I want to thank you very much for being with us. I think the demonstration that will be taking place in New York at 4:00 at 47th and First outside the United Nations of Yemenis will be—take on a new significance, Yemenis against the Saleh regime right now. Iona Craig, speaking to us from London, usually based in Sana’a, Yemen. She was last there in August. 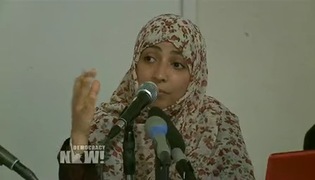 Nobel Peace Winner Tawakkul Karman on Yemen and the U.S. War on Terror