For Liberian President Ellen Johnson Sirleaf, the Nobel Peace Prize announcement comes as she wraps up her reelection campaign. Voters in Liberia head to the polls on Tuesday. The other Liberian Nobel winner, Leymah Gbowee, is the founder of the Women for Peace movement, credited by some for bringing an end to the civil war in 2003. The movement started humbly in 2002, when Gbowee organized a group of women to sing and pray for an end to fighting in a fish market. We speak to Emira Woods, a Liberia native and co-director of Foreign Policy in Focus at the Institute for Policy Studies in Washington. [includes rush transcript]

AMY GOODMAN: We turn to the other two winners of the Nobel Peace Prize. Emira Woods is with us, co-director of Foreign Policy in Focus at the Institute for Policy Studies.

Can you talk about the significance of this award for Liberia?

EMIRA WOODS: Well, this is an exciting moment, and we congratulate all of the laureates. Clearly, what this award does is to spotlight the work of women peace activists in Liberia. Leymah, who’s an extraordinary woman, sees herself as a community organizer and began organizing a movement, first of women in churches, then reaching out to women in mosques, but really women pushing forward the path to peace in Liberia. You know, Amy, they marched every day in the pouring rain, in the blazing sun, with their kids on their backs, demanding the ouster of the former president, Charles Taylor. And their work went largely unrecognized, really, except for a few of us who held them up. And we applaud the filmmaker Abby Disney for her film Pray the Devil Back to Hell that spotlighted their story. But really, it’s a story that had been marginalized for far too long, and so we are thrilled today to have the recognition, so well deserved for the Women Peace Network in Liberia.

You know, the other laureate, Ellen Johnson Sirleaf, we hold her up, as well. She is Africa’s first democratically elected woman president. She has long been an icon and a role model for many on the continent and around the world. I have to say it’s a little bit—it’s interesting, this prize going to her. It is just a few days before the elections, and she is, as the incumbent, running for president, and the elections are next week, October 11th, in Liberia. Clearly, women were fundamental in terms of getting her into office, and, many believe, keeping her in office on this path to peace for the last six years. But she comes from a different tradition. And let’s remember, you know, it’s—Ellen Johnson Sirleaf remains, really, the only president on the continent of Africa that offered to host the U.S. Africa Command, AFRICOM, very controversial move, not well supported by civil society, or particularly the Council of Churches and others in Liberia who were not in support of that. So, really, this award, it comes at a challenging moment, probably for the opposition in Liberia, but it also, for many of us who are committed to peace, is a reminder that this should be a clarion call for the President to remember her commitment to long-term peace and justice, not only for the people of Liberia, but for all of the African continent and the world.

EMIRA WOODS: Well, there have been some extraordinary advances. The peacekeeping mission has been an incredible asset. To have a segment of the U.N. focused on the needs of women, focused on the challenges of women in a post-conflict situation, I think, was an extraordinary measure. It also went, to many respects, as a clarion call for those who were criticizing, you know, some of the U.N. peacekeepers for violence against particularly young women and other sexual violence and the country, as has happened in other operations. So, it came at a critical moment, and it led the way, showed that there can be a contingent of peacekeepers that pays attention to the special needs of women during conflict and in post-conflict situations.

But it’s not only that. You know, there have been many in her cabinet that have been women. You have also an expanded role for women in the police force in Liberia, in many other disciplines that are non-traditional disciplines. So, clearly, you know, Liberia has a ways to go in terms of the numbers of politically elected officials in the legislature, but these are huge steps in the right direction.

AMY GOODMAN: I want to thank you for being with us, Emira Woods, co-director of Foreign Policy in Focus, Institute for Policy Studies, as we talk about the Liberian Nobel Peace Prize winners, both women, President Ellen Johnson Sirleaf of Liberia and the Liberian activist Leymah Gbowee—this very much coming on the heels of the death of the first African woman Nobel Peace Prize winner, Wangari Maathai from Kenya.

This is Democracy Now!, democracynow.org, The War and Peace Report. When we come back, we go to a woman peace activist in Afghanistan. She won’t use her real name, for fear of retribution. We’ll also speak with Anand Gopal, who is with us here in New York. Stay with us.

Ten Years After U.S. Invasion, Afghan War Rages On with No End in Sight

NEXTTen Years After U.S. Invasion, Afghan War Rages On with No End in Sight 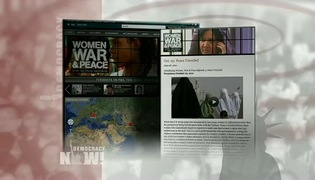