Bogus Postal Service Crisis Deserves to Get a Return to Sender

On any given Saturday, the line of people at my local post office in Manhattan’s Inwood section often stretches out to the street.

Some come to pick up their mail because of a broken box. Others bring wrapped boxes to send to relatives abroad. Many need to buy postal money orders for grandma in the Dominican Republic or Mexico.

Some even buy stamps.

All over America, the poorer the neighborhood, the longer the lines at the post office.

The idea that this most visible neighborhood presence of our national government for more than 200 years faces financial default on Sept. 30 is truly astounding.

Yet, that’s exactly what will happen unless the politicians in Washington act quickly.

Critics say the Internet, FedEx and UPS have turned the post office into a relic. That view ignores the reality that 30% of Americans still do not use the Internet–most of them poor and elderly. Or that the Postal Service had its two biggest years for mail volume in 2006 and 2007, just before the financial crash.

Those critics claim the agency is losing billions of dollars annually because of a bloated workforce that makes too much money and has generous health benefits and pensions.

Even President Obama’s postmaster general, Patrick Donahoe, seems to agree. Donahoe wants Congress to give him the power to trash a postal union contract he signed in May. He wants to lay off 120,000 workers and close thousands of post offices.

His agency is in such bad shape, Donahoe warns, that he cannot meet a $5.5 billion payment to the Treasury on Sept. 30 for future health benefits.

Union leaders and consumer advocates like Ralph Nader insist this is all a “manufactured crisis” to drive down wages and break the unions.

At least two recent postal audits seem to back up those claims. They show the government has been siphoning too much in Postal Service revenues to pay for health care and pension benefits.

Take the $5.5 billion the agency must pay the government in a few days. That’s part of a “Postal Accountability” law the Republicans pushed through in December 2006–just before they lost control of the House and Senate.

It requires the Postal Service to fully fund health benefits of retirees for the next 75 years. As a result, the agency must contribute $103 billion to that fund by 2016.

In other words, the Postal Service is paying for health care costs of people it hasn’t even hired yet. That’s something no other government or private company is required to do, Nader noted in a letter to Congress last week.

“Read the rest of Juan Gonzalez’s column in The Daily News”: http://www.nydailynews.com/ny_local/2011/09/28/2011-09-28_you_dont_have_mail_bogus_postal_service_crisis_deserves_to_get_a_return_to_sende.html#ixzz1ZG47reQS 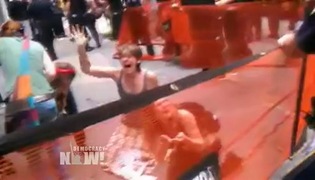