As the nation headed into Labor Day weekend, the Obama administration quietly asked the U.S. Environmental Protection Agency to withdraw a plan to limit smog pollution that was projected to prevent 2,200 heart attacks and 23,000 asthma attacks annually. Obama said he made the decision in hopes of reducing regulatory burdens for businesses in a time of economic uncertainty. The move was seen as a major victory for polluters and some business leaders, and another setback for environmentalists. We host a debate with John Walke, the clean air director at the Natural Resources Defense Council, and Dr. Roger McClellan, adjunct professor at the Duke University Medical Center and past chairman of the EPA’s Clean Air Scientific Advisory Committee. [includes rush transcript]

NERMEEN SHAIKH: We turn now to environmental news. As the nation was busy preparing for Labor Day weekend, President Obama quietly asked the U.S. Environmental Protection Agency to withdraw a plan to limit smog pollution that was projected to prevent 2,200 heart attacks and 23,000 asthma attacks annually. Obama said he made the decision in hopes of reducing regulatory burdens for businesses in a time of economic uncertainty. The move was seen as a major victory for polluters and some business leaders, and another setback for environmentalists.

Joe Romm, senior fellow at the Center for American Progress and editor of Climate Progress, spoke on Current TV’s Countdown about Obama’s decision.

JOE ROMM: This is actually doing something worse than what George Bush wanted to do. Remember, what happened was, there was a standard, an air pollution standard, back in '97. New science came in that said ozone smog was much more dangerous than we thought, you need to strengthen it. Bush proposed a half-[bleep] improvement in the standard, but not where the science says, so environmental groups sued him. Obama came in and said, “Hey, you know, you environmental groups, you're right. We will strengthen it. You can drop the suits. Trust us.” So, what they’ve done now is say, “We’re not going to do anything until 2013.” They could have—and the American Lung Association said this—they could just institute the Bush standard, which would have reduced air pollution, not as much as the science says, but better than doing nothing.

AMY GOODMAN: That was Joe Romm of the Center for American Progress on Keith Olbermann’s Countdown on Current TV.

Well, the EPA declined our request to join us on the show, but did issue this official response. They said, quote, “Since day one, under President Obama’s leadership, EPA has worked to ensure health protections for the American people, and has made tremendous progress to ensure that Clean Air Act standards protect all Americans by reducing our exposures to harmful air pollution like mercury, arsenic and carbon dioxide. This Administration has put in place some of the most important standards and safeguards for clean air in U.S. history: the most significant reduction of sulfur dioxide and nitrogen oxide air pollution across state borders; a long-overdue proposal to finally cut mercury pollution from power plants; and the first-ever carbon pollution standards for cars and trucks. We will revisit the ozone standard, in compliance with the Clean Air Act,” they wrote.

Well, for a debate on the issue, we’re joined now by two guests. In Washington, D.C., John Walke is with us, clean air director of Natural Resources Defense Council. And in Albuquerque, New Mexico, we’re joined by Dr. Roger McClellan, adjunct professor at Duke University Medical Center and past chair of the EPA’s Clean Air Scientific Advisory Committee. He’s at the public television station KNME.

John Walke and Roger McClellan, thanks so much for being with us. John Walke, why don’t you lay out why the NRDC made such a strong condemnation of the Obama administration, saying this decision on smog pollution and regulation is the worst of the administration?

JOHN WALKE: Well, President Obama made a brutal political calculation to sacrifice public health, clean air, and even law enforcement, in order to curry favor with Big Oil and reduce what the president called “burden” to polluting industries. In doing so, he condemned the Environmental Protection Agency not only to accepting, but defending in court, a Bush administration smog standard that, as Joe said, is not only is unprotective, but something that the head of EPA called “legally and scientifically indefensible.” These were the facts when EPA went to the White House in July to strengthen smog standards, and all signs were that they were going to do so, until what I’m calling the “Friday Smog Massacre” this past Friday, when the President himself intervened, on nakedly political grounds, to override science, the law and smog protections for all Americans.

AMY GOODMAN: Let’s get the response of Dr. Roger McClellan in New Mexico. Your response?

DR. ROGER McCLELLAN: Good morning. It’s a pleasure to be on the show.

I have quite a different view of this. Under the Clean Air Act, passed in 1970, we have a very orderly process for setting national ambient air quality standards for six criteria air pollutants. I’ve been involved in that process since the mid-1970s. Ironically, my first involvement was with the setting of the lead standard when I chaired a ad hoc committee to offer scientific advice on that standard. I mention irony because the EPA was pushed into setting that standard by the NRDC. I’ve been involved over this past three-plus decades in that process. It’s an orderly process in which the statute calls for a review of the science on a five-year cycle.

That last review for the ozone standard was concluded in March of 2008. It was based on science through 2005. The then-Administrator Johnson lowered the standard, from 84 parts per billion to 75 parts per billion, to assure that the standard was health-protective. He had received advice from the Clean Air Scientific Advisory Committee. They drew a sharp line in the sand, if you will, at 70 parts per billion. What was clearly apparent to those who understand the system is they were offering both scientific advice and policy advice, and thus the administrator is not bound to follow that.

When the Obama administration came in, Lisa Jackson reached back, basically said, “Well, if I had been in office a year earlier, I would have made a different policy decision.” She cloaked it as though it was the science compelling her to do it. Then she proceeded to set in process a review of that. It wasted literally hundreds of person-years of effort in terms of that. At the same time, she was compelled by the standard to proceed with the regular review. So here we are, the regular review is three-and-a-half years down the road. They’ll have the opportunity to propose a standard next year, and in 2013, a final standard. So, the President, with the advice of his individual, Cass Sunstein, in the Office of Information Regulatory Affairs, I think made a reasonable decision: let’s not waste our time in terms of this reconsideration of the old standard based on outdated science; let’s proceed with the orderly process that’s in place.

NERMEEN SHAIKH: Well, back in May, Jon Stewart of The Daily Show spoke with EPA Administrator Lisa Jackson about the alleged trade-off between environmental regulations and business growth. Let’s go to that clip.

JON STEWART: The argument always seems to be that the EPA cannot do that without killing business or killing jobs, that to keep, let’s say, dioxin from killing us, we must kill the factory. Is there a happy medium? Can we not die, but also they live?

LISA JACKSON: We can—we can have a strong economy and a strong and healthy environment. We can have clean air and clean water. And in fact, there’s evidence of that. There’s evidence in the last 40 years that the air is 60 percent cleaner, while our GDP was up 207 percent.

JOHN WALKE: Absolutely. The irony here is that EPA found that the benefits of stronger smog protections outweighed the cost to industry. And the White House on Friday did not dispute that. The White House also has not disputed that between 1990 and the year 2020 the Clean Air Act will deliver $12 trillion—with a T—in economic benefits to the American people, in terms of days not missed at work and school, lives saved, asthma attacks avoided, and the like. This was a political decision.

And to point out something about Dr. McClellan’s summary of the arguments that industry made to the White House leading up to this debacle, that all overlooks one thing: the head of EPA, Lisa Jackson, concluded that the Bush administration had broken the law in adopting unprotective smog standards that departed from the unanimous recommendations of her science advisers. The reason she decided months after taking office in 2009 to correct that legal violation was in part because she had been sued by the American Lung Association, 12 states, including the President’s own state of Illinois, and she did not want to waste judicial resources and government resources on defending an indefensible standard.

JOHN WALKE: So, the White House—

AMY GOODMAN: Is Lisa Jackson going to survive? And I think it is worth noting that her child suffers from asthma.

JOHN WALKE: Yes, Lisa’s teenage son has asthma, which I’m sure made this capitulation by the President only that much more painful. But she is a strong and valuable leader that we need overseeing EPA. I desperately hope she does not retire, because there are many, many important things to accomplish to reduce carbon pollution and mercury pollution, and we need her leadership, despite this brutal setback.

AMY GOODMAN: We want to thank you both for being with us to discuss this issue, John Walke, clean air director at NRDC, Natural Resources Defense Council, and Dr. Roger McClellan, adjunct professor at Duke University Medical Center, adviser to public and private organizations on inhalation toxicology, past chair of the EPA’s Clean Air Scientific Advisory Committee. He was speaking to us from our friends out in Albuquerque, KNME, who also uplink us to PBS stations. Thanks so much for cooperating with us today. 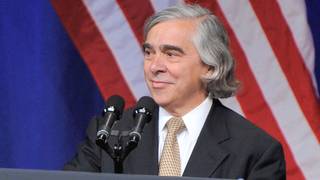