Broadcasting from Richmond, we look at a new law that could force many of Virginia’s abortion clinics to shut down. Passed last month, the so-called “Targeted Regulation of Abortion Providers,” or TRAP, law requires clinics that provide abortions to meet the same building standards as hospitals. Critics say the new rules are a thinly veiled attempt to limit access to abortion services because clinics unable to afford to overhaul their buildings would close down. Similarly intentioned TRAP laws levying special requirements on doctors who provide abortions have threatened the last remaining clinic in Mississippi and recently forced a clinic in Tennessee to close. The man leading the push for Virginia’s new regulations, longtime Virginia Attorney General Ken Cuccinelli, has announced his plans to run for governor next year. We’re joined by Shelley Abrams, director of the Capital Women’s Health Clinic, which has obtained an emergency license to provide abortions for two years as it prepares to meet the state’s new building requirements. [includes rush transcript]

StoryMay 17, 2019What Does a Post-Roe America Look Like? As Anti-Choice Laws Multiply, Many Already Are Living in It

AMY GOODMAN: Well, we are on the road in Richmond, Virginia, as part of our 100-city Silenced Majority Election 2012 tour. As we broadcast in the state capital, Richmond, we turn now to a new law that could force many of Virginia’s abortion clinics to shut down. Passed last month after a long fight against it, the so-called Targeted Regulation of Abortion Providers, or TRAP, law requires clinics that provide abortions to meet the same building standards as hospitals. This includes specific requirements for the width of hallways and doorways, the size of operating rooms, the numbers of parking spots, even the size of the janitor’s closets and types of water fountains. Critics note that other outpatient clinics, such as those that perform plastic surgery, are not subject to the same requirements. They say the new rules are a thinly veiled attempt to limit access to abortion services because clinics unable to afford to overhaul their buildings would close down, as has happened in other states with similar laws, such as Mississippi, Tennessee and Louisiana.

All this follows Virginia’s passage of a law in March that forces women seeking abortions to have an ultrasound at least 24 hours beforehand. The original version of the law included a provision that mandated the insertion of a vaginal probe to conduct the ultrasound, but this was removed after critics dubbed it a form of “state rape.”

Now, the man leading the push for these new regulations, longtime Virginia Attorney General Ken Cuccinelli, has announced his plans to run for governor next year. His efforts helped launch a website called Cooch Watch. And for more, we’re joined right now by one of the site’s co-founders, Shelley Abrams. She’s also the director of the Capital Women’s Health Clinic, which has obtained an emergency license to provide abortions for two years as it prepares to meet the state’s new building requirements.

AMY GOODMAN: It’s good to be here in Richmond. Explain what has just taken place in the last few weeks.

SHELLEY ABRAMS: Well, what’s basically taken place is that the attorney general has strong-armed the Board of Health, who was about to approve regulations that could possibly exempt existing clinics, like mine, who have been safely performing abortions, exempt us from having to adhere to architectural guidelines that are essentially inserted to shut us down. They are so costly and unnecessary. And Ken Cuccinelli, our attorney general, threatened the board a couple of days before their vote that if they were to insert this grandfather clause that would allow us to continue without the architectural guidelines, that he would potentially refuse to represent them in any future legal cases that they might have related to being on the board. And this did in fact work. The board did not insert a grandfather clause, and clinics are now required in two years to completely change our physical facilities, if we can afford to.

AMY GOODMAN: And you have to change them how?

SHELLEY ABRAMS: Basically, we’re going to have to knock down walls. We’re going to have to insert very expensive sinks in certain locations, you know, things that just are really, really unnecessary, considering how long we’ve been providing safe abortion access in Virginia.

AMY GOODMAN: I wanted to play a comment of Attorney General Ken Cuccinelli made in an interview with Pro-Life News earlier this year in which he defended the TRAP laws.

ATTORNEY GENERAL KEN CUCCINELLI: Twenty-eight years ago in Virginia, in 1984, the National Organization for Women and the Virginia Society for Human Life held a joint press conference—

ATTORNEY GENERAL KEN CUCCINELLI: —the only time that has ever happened in Virginia.

ATTORNEY GENERAL KEN CUCCINELLI: And they held it because the same regulations, or something like them that are now going to be put on abortion clinics, were removed. And their basic complaint was, if you take off these basic safety and health standards, women are going to be treated terribly in these clinics. And sure enough, that came to be the case in some of those clinics, and that’s what the regulations being put back in place will hopefully fix.

SHELLEY ABRAMS: My response is that the regulations surrounding abortion clinics that were passed last year had absolutely no precipitating events. They came out of nowhere. Abortion had been safely being provided in Virginia since Roe v. Wade. So, the idea that this is about women’s safety is a farce. Ken Cuccinelli has stated that he wants to see abortion basically disappear in Virginia. He’s very, very upfront about that, and I appreciate it. I just wish he would stop couching his approval for regulations under the guise of caring about women, because he doesn’t care about women.

AMY GOODMAN: You were arrested right here, right, in this building, where we are?

SHELLEY ABRAMS: I was arrested on the Capitol steps around the corner.

AMY GOODMAN: Explain what happened and when that was.

SHELLEY ABRAMS: Well, it was on March 3rd, and a wonderful group here was holding a rally and a march. And at the end of the march, we all marched up to our Capitol steps and stood up and, you know, wanted our voices to be heard. We were against the vaginal ultrasound bill. We were against the regulations around abortion facilities. And we sat down on our steps and were promptly arrested.

AMY GOODMAN: Explain the governor’s stand on this.

SHELLEY ABRAMS: Well, again, the governor is pretending like—

SHELLEY ABRAMS: Yes, Governor Bob McDonnell is pretending that he cares about the women of Virginia. And so, he is stating that the vaginal ultrasound bill was to inform women. And clearly, he has never been pregnant and never been in the position that a lot of women are when we find out we’re pregnant and maybe don’t want to be, because we are extremely informed, and we spend a lot of time considering our decisions.

AMY GOODMAN: You know, it’s interesting, this, I think, has clearly influenced national electoral politics, as well, because Virginia Governor Bob McDonnell was one of the leading contenders to be vice-presidential running mate of Mitt Romney, and he was the one who introduced Mitt Romney when he introduced Paul Ryan in Norfolk. But because of this transvaginal ultrasound issue, where it became so controversial around the country that he was requiring this, or he was pushing for this, it looks like Mitt Romney had to step back.

SHELLEY ABRAMS: Well, I think what you saw in Virginia were, finally, the people standing up to their government when the government has gone too far. It was a beautiful grassroots movement where people came from across the state and stood on our Capitol grounds multiple times and stood up to our government and said, “You may be in power, but we’re not going to take this anymore.” And really, that’s why we created Cooch Watch, was to let them know that you may be in power now, but the people are watching you, and we’re not going to stand for this kind of tyranny.

AMY GOODMAN: These TRAP laws that are being used here in Virginia, put them in a national perspective.

AMY GOODMAN: And the effect on women, what these laws are not now having to do with women seeking abortion and reproductive health services?

SHELLEY ABRAMS: Certainly, and like I said, we’ve been providing safe abortion care for many years in Virginia. But these new, new, new guidelines are going to cost so much money that I have a friend across the state that have stated to me in private that they are not going to be able to afford to stay open. There are—you’re going to see access in Virginia tremendously reduced over the next two years if these are allowed to stand.

AMY GOODMAN: The architectural requirements, is this a new approach in other parts of the country, as well?

SHELLEY ABRAMS: Certainly this is a new approach. Virginia has taken the strongest approach and will probably be a guide for many, many other states who are trying to—

AMY GOODMAN: Are we going to see it with other outpatient procedures like plastic surgery, as well? The government—it’s interesting, because you have the party of decreased government regulation pushing for massive regulation.

SHELLEY ABRAMS: Certainly, absolutely not. All the people who have lobbied for these regulations against us have been asked if they plan to lobby for plastic surgeons or doctors’ offices like that. And they said, no, their focus is solely on abortion. So, this is a clear, clear tactic, and it’s spreading like wildfire across the country.

SHELLEY ABRAMS: The new ultrasound requirement—I and our facility are seeing fewer people coming in on time. They are later in the pregnancy, because the two visits are very daunting.

AMY GOODMAN: Well, I want to thank you very much for being with us. As you heard this news of the Wichita clinic being reopened—that’s Dr. George Tiller’s clinic, who was gunned down by an anti-choice extremist when he was in church—your thoughts today?

SHELLEY ABRAMS: It warms my heart, because Wichita has been without access for many years now.

AMY GOODMAN: Shelley Abrams, director of the Capital Women’s Health Clinic, I want to thank you very much for being with us—

AMY GOODMAN: —as we broadcast from the Capitol building here in Richmond, Virginia. We’re broadcasting from the studios of WCVE. We’re back in a minute. 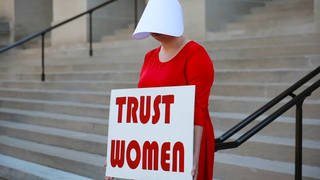 What Does a Post-Roe America Look Like? As Anti-Choice Laws Multiply, Many Already Are Living in It