Today we look at the Chilean students’ movement, which led last year’s massive citizen democracy movement — the largest protests since the days of opposition marches to General Augusto Pinochet a generation ago. For more than a year, the movement has rallied hundreds of thousands in the streets of Santiago and other major cities to demand greater access to affordable university education, as well as deeper structural changes in Chile. The country has the highest per capita income in the region, but also one of the most unequal distributions of wealth. We are joined in our studio by two of Chile’s most recognizable student protest leaders: Camila Vallejo and Noam Titelman. They are in the United States, in part, to receive the 2012 Letelier-Moffitt Human Rights Award, which is given by the Institute for Policy Studies. It is named for the Chilean diplomat Orlando Letelier and his colleague Ronni Karpen Moffitt, who were murdered in Washington by agents of the U.S.-backed Pinochet regime in September 1976. [includes rush transcript]

StoryOct 06, 2011Naomi Klein: Protesters Are Seeking Change in the Streets Because It Won’t Come from the Ballot Box

NERMEEN SHAIKH: Two leaders of the Chilean student movement are in the United States this week where they will be awarded the 2012 Letelier-Moffitt Human Rights Award. The prize is named for the Chilean diplomat Orlando Letelier and his colleague Ronni Karpen Moffitt, who were murdered in Washington by agents of the U.S.-backed Chilean dictator General Augusto Pinochet in September 1976.

Over the past year, the Chilean students’ movement has led some of the largest protests in Chile since the days of opposition marches to Pinochet a generation ago. The movement has rallied hundreds of thousands into the streets of Santiago and other major cities to demand greater access to affordable university education, as well as deeper structural changes in Chile. The country has the highest per capita income in the region but also one of the most unequal distributions of wealth.

We are also joined by Camila Vallejo, vice president of the University of Chile Student Federation. From late 2010 through 2011, she was president of the organization and has been a main spokesperson for the national student federation, the Confederation of Chilean Students. Camila Vallejo is also a member of the Central Committee of the Chilean Communist Youth and a geography student at the University of Chile in Santiago. Her interpreter is Marcial Godoy.

And we welcome you all to Democracy Now! Noam, let’s begin with you. Talk about the significance of the movement and what is taking place now in Chile. In the United States, we—it is hard enough to get protests covered in the United States, let alone in Chile, no matter how significant they are.

NOAM TITELMAN: Yes. I think the first thing to understand is that we have a very special educational system, which was imposed during the 1980s during the Pinochet dictatorship, which has one basic principle, and it’s that the market always works. And we found out that, obviously, it’s not that way always. And what we’ve seen is that, for example, while our public education is dying, we have only 36 percent of students going to public schools. Here in the States, it’s almost 90 percent. It’s really a very special example of how privatized can a state become. And all of this started accumulating a lot of problems, a lot of inequalities.

And this exploded many occasions during the last decades, but during the 2011, it had a special massification of this issue when we saw almost—almost all of schools and universities of the country paralyzed for almost six months, over a million people in the streets. And we even saw some students willingly losing their academic year, many thousands of them. And all of this is obviously because something is not working with this extremely privatized educational system.

NERMEEN SHAIKH: Camila Vallejo, can you talk about how it is that the movement was able to mobilize such large numbers of people?

CAMILA VALLEJO: [translated] First, I want to remark, in light of the Letelier-Moffitt Prize that we’re receiving, that Orlando Letelier was one of the first to warn about what would come with the implementation of neoliberal policies during the dictatorship. He warned that through violence in Chile there would not only be a sort of a market society put in place, but actually that all—many things that were previously considered basic rights would be turned into neoliberal goods.

AMY GOODMAN: And Orlando Letelier was the former Chilean ambassador to the United States who was blown up in a car bomb on Embassy Row—

CAMILA VALLEJO: [translated] And that these circumstances would end in the privatization of basic rights and of basic goods, and that families would have to become indebted to procure these basic things, and that’s what led, really, in Chile to these massive protests.

AMY GOODMAN: Camila Vallejo and Noam Titelman, we have to end it there, but we’ll continue in a post-show discussion and post it online at democracynow.org.

Naomi Klein: Protesters Are Seeking Change in the Streets Because It Won’t Come from the Ballot Box 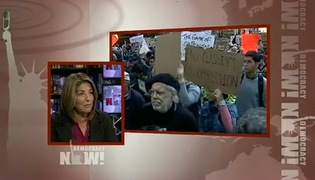 Naomi Klein: Protesters Are Seeking Change in the Streets Because It Won’t Come from the Ballot Box