Without Power and Aid, Low-Income Residents of NYC’s Lower East Side Struggle in Storm’s Aftermath

We speak with residents of the low-income and largely minority community of Manhattan’s Lower East Side who live in the shadow of a Consolidated Edison substation that flooded during Superstorm Sandy and has left thousands in the dark. With no sign of help from the city or the Federal Emergency Management Agency, residents talk to Democracy Now! producer Renée Feltz about the storm’s impact on their lives. Many are struggling to carry water up darkened stairwells in buckets filled up at fire hydrants, while others are assisting bedridden elderly parents who live in the Jacob Riis public housing units. Everyone is asking when their power will be restored. [includes rush transcript]

AMY GOODMAN: This is Democracy Now!, democracynoworg, The War and Peace Report. I’m Amy Goodman. We’re on the road in St. Louis, Missouri, because in New York, our studio, like so many other places in New York, in New Jersey, is blacked out, is without electricity. We don’t know when it will be turned back on. But we have a remarkable group of people who are working on the ground in New York to bring you this incredible coverage, as we continue our coverage of Superstorm Sandy by looking at how impacted an economically divided New York City, especially in Manhattan, where the richest fifth make 40 times more money than the poorest fifth. Inequality in Manhattan rivals parts of sub-Saharan Africa. On Wednesday, Democracy Now! producer Renée Feltz spoke with low-income residents in the Lower East Side of Manhattan about the storm’s impact on their lives.

RENÉE FELTZ: This is Renée Feltz, part of the Democracy Now! team, out in the streets of the East Village with Martyna Starosta of the Democracy Now! team. We are here at the famed ConEd substation at 14th and C. This place showed up in video all over the internet after Superstorm Sandy hit, when the substation blew a fuse, dramatically lighting up the night sky here after Manhattan had fallen dark, and Brooklyn behind it, as well. Now we’re going to go into the East Village and see how people are surviving in an area that is home to thousands of people who have no power, no access to food, as many of the stores are closed, and in some cases no actual flushing toilets. So let’s venture into the neighborhood and see how people are surviving.

Please introduce yourself and tell us a little bit about—you live here?

RAYMOND PEREZ: My name is Raymond Perez, and I grew up in the neighborhood. I was born and raised out here in the Lower East Side. And basically, you know, we’re really struggling out here. We’re running out of food, behind this storm thing that came by. And it practically came over the river, and it came all the way over here, started messing up—right?

RAYMOND PEREZ: It ruined a couple of—it ruined a lot of stuff, you know.

ARMANDO MORALES: It blew out the transformer.

RENÉE FELTZ: Excuse me, sir. Can you introduce yourself?

RENÉE FELTZ: And what are you saying here?

ARMANDO MORALES: Well, what I’m saying, when the water came up, everything was going good until it blew out the transformer. Then all the total lights went out. Everybody was really going crazy. The flash—flashlights in the hallway, people—people going crazy, not knowing what to do, instead of taking—making a plan B, because they heard about it all week that Sandy was going to hit, you know? Now we just got to go crazy, go and get water to fulfill our house. We got no water. We got no electricity. Food is going to go bad, you know what I mean? We’re working on trying to eat. No heat. It’s cold.

And for the elderly, it’s bad, because my mother lives on 108, and she’s cold. She’s 83. And she’s dealing with a cold, and I’m trying to keep the place warm by lighting up the oven. But how long can you do that? You can’t do that that long. And I have to go back and forth for her to get buckets of water to keep cleaning things and doing that, and it’s getting me out of health, because I’m walking back up and forth. And then bathing—you can’t bathe. There’s no water. It’s very bad for the people on the Lower East Side.

RENÉE FELTZ: So, we’re here at an apartment in the Jacob Riis House on the fifth floor. Someone has invited us to—someone has invited us in. They’re here to check on their mother. She came down from the Bronx, and the mother is bedridden. So we’re going to find out what’s happening.

RENÉE FELTZ: And what is her situation living here right now?

DAUGHTER: Everything is fine. She’s just bed-bound, and she has to have everything done. Like she can just sit up. She can’t walk; as you can see, her wheelchair is there, her walker is here, her toilet’s here. So, she has a—to me—she needs everything done for her, and help.

RENÉE FELTZ: And I would like you to ask her what is her concerns now, as she’s living without power and without water.

DAUGHTER: She says she’s worried. She gets sick all the time. And how is she going to get to the hospital? Because there’s no elevators.

RENÉE FELTZ: Hi, sir. I see you’re filling up a water bottle here at the fire hydrant. Can you introduce yourself?

SAM: Yes, I’m Sam from the Lower East Side.

RENÉE FELTZ: And you live in the neighborhood?

SAM: Yes. I actually live here with my fiancée, Marisol.

RENÉE FELTZ: OK. And we have a lot of radio listeners. Maybe you could describe what you’re doing right now.

SAM: Right now we’re just trying to get some water going in here, so we can also like wash up, cook and do other things that we need to do, because there’s no water in the building. Elevators are off. You see the stores? There’s no bread. There’s nothing in there. Only thing in there is cigarettes. And you can’t live with cigarettes. We need water. We need food. And—

RENÉE FELTZ: I notice a liquor store is open.

SAM: I didn’t even notice that. Where? On Ninth Street?

RENÉE FELTZ: But back to the water and the issue at hand here, I see that you’re filling up the water. Now, have you seen any FEMA trucks or anybody like that coming around to offer water?

SAM: No, I haven’t seen anything, nothing at all, nobody offering anything. Yesterday somebody gave me a big gallon of water—I mean, you know, big empty gallon. And they just told me, “When you’re done with it, just return it back,” which is nice, that person did for us. But I haven’t seen anyone do anything for us out here.

I would love the power to come back on. That’s what I would love, too. I’ve been out of work already since Monday. Today’s Wednesday. Actually, three days without work.

RENÉE FELTZ: We’re here on Avenue C near the Jacob Riis Houses, where we’ve been talking to people this afternoon. Behind me is a small deli, which is open for business. No lights, no power, but people able to go in and out and get a few things. The streets are relatively lively, with people filling up water bottles at fire hydrants, talking to each other, checking in, people coming from other parts of the city to check on their parents. But other than that, we’ve seen very little representation of official help. Behind me I have a little NYPD surveillance mechanism that sometimes provides lights on these dark streets at night. The streets here, without power, will definitely be dark tonight. And people will be continuing to ask, “Where is the official help? Where is the city? Where is FEMA?” And in this low-income, mostly minority community, they’re mostly asking, in the shadow of the ConEd 14th Street substation, “Where’s the power?”

AMY GOODMAN: And thank you so much to my colleagues in New York for these reports under, to say the least, very difficult conditions. This is Democracy Now!, democracynow.org, The War and Peace Report. They’re on the ground in New York. 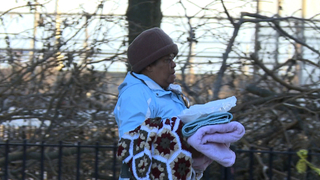