After Sandy, Occupy Movement Re-Emerges as Relief Hub for Residents in Need

In addition to the National Guard and FEMA, one of the more active relief efforts in New York City has been a volunteer effort organized by alumni of Occupy Wall Street called Occupy Sandy Relief. Along with groups like 350.org and Recovers.org, Occupy activists quickly mobilized hundreds, and then thousands, of people to help affected areas of New York City. Democracy Now! senior producer Mike Burke speaks with Occupy organizer Catherine Yeager in the Rockaways about Occupy Wall Street’s transformation into Occupy Sandy Relief. [includes rush transcript]

StoryNov 08, 2013“We Are Living in the World Occupy Made”: New York City Voters Elect Mayor Who Vows to Tax the Rich

MIKE BURKE: Interestingly, one of the more active relief efforts that we came across in the Rockaways was done by a group calling themselves Occupy Sandy Relief. And this is a group of—pretty much of alumni from Occupy Wall Street who started organizing really in the hours after the storm, about ways that just, you know, regular members of the community could help. And we talked to one organizer named Catherine Yeager. She lives in the Rockaways, and we talked to her outside of the—a restaurant called the Veggie Island, which had been transformed into a relief hub. And this is part of what she had to say.

CATHERINE YEAGER: My name is Catherine Yeager. I moved down to the Rockaway in March of this last year. I am good friends with Elizabeth Gilchrist, who owns Veggie Island. I have a bungalow down on 89th Street, and I was here for the entire hurricane. You know, it’s been a whirlwind. We’ve been trying as much as possible to organize things. We’ve been putting food out as much as possible. Lots of stuff has been coming in. And I just love Rockaway, and I want it back to where it was before the storm.

MIKE BURKE: So what’s happening behind you right now?

CATHERINE YEAGER: What’s happening behind me right now is basically we’re working with Sandy Relief and OWS. The people are bringing by the car loads in clothes, food, cans goods, diapers, batteries, flashlights, everything under the sun, you know, that we kind of need right now. And so, people are able to come up and sort of pick through the different things they need, be handed the things. We have warm food that we’re making all the time for people. And so, it’s really, essentially—I mean, we have cars that come in, and things are dropped off, and within 30 minutes it’s all gone. You know, I mean, it’s that desperate down here. People have literally lost everything.

Right now, the biggest issue that we need is generators, and we need pumps, because we can’t get the electricity turned back on until all of the basements are pumped out. And there’s still—if you walk Rockaway and you knock on any door, someone—every single door, someone is going to need help.

The water that came in is toxic, OK? We had water from the beach. I watched the waves that morning. They were already incredibly dirty. The bay and the ocean met every single part of Rockaway during the storm. There was at least two feet of flooding everywhere, sometimes up to six or seven feet of flooding, depending on where you lived. Everyone’s been affected, doesn’t matter who you are, doesn’t matter where you are. Every single person’s been affected. And so, a lot of right now is getting those basements pumped out, debris getting pulled out, you know, sweeping out huge chunks of just gunk and junk, and trying to figure out where it all goes. The boardwalk is destroyed. You know, I watched the boardwalk out my window come rushing down. The water level here got up to about five feet, and the winds were almost 20 miles per hour, so it looks like the ocean coming through this entire place. I watched cars rolling down the street. I mean, it was—it was scary. And out the window, you could see the fire. You could see this huge flame of fire coming from Breezy Point. And they really—I mean, there were, I think, 80 homes lost over there—and just devastated.

So, the last couple days have been very inspiring, because we’ve had so many people coming. People are starting to realize that Rockaway was hit as bad as it was hit, and they’re coming to start helping and starting to think about us a little bit more. So, we’ll see what happens. I don’t know when we’re going to get electricity back. I don’t know. A lot of the people’s homes are heated by baseboard heaters, and it’s just—this is salt water we’re talking about. So salt water is going to kill everything, you know? Anything, any kind of tools or cars or anything that runs on these different motors or electricity, when that salt water hits it, it’s destroyed, you know?

MIKE BURKE: Now, how are the relief efforts that are taking place here different from what we’re seeing with FEMA and the National Guard down the street?

CATHERINE YEAGER: FEMA down the street, from what I understand, is handing out pieces of paper that tell you to call a phone number to get help. Here, you come, and you get help immediately.

We’re going to start organizing and having people come down with their—we’re encouraging people who come down and want to do manpower help, bring your own cleaning supplies. Be your own self-sufficient cleaning person, so that we can start sending you to homes, and you just knock on the door, and you can go in, and you can start cleaning. You don’t have to come here and grab cleaning supplies. You’ve got your own to go out.

We’re going to start trying to put signs up at the ends of streets and do red flags, so that people can put red flags out if they do need help, so that we have a better idea of who’s doing things on their own, who’s OK, who’s not. You know what I mean? Because it’s hard. You walk around, and it’s just such devastation that you don’t even quite know where to start. And sometimes when it’s that overwhelming, you don’t quite know where to go.

FEMA is providing cellphone charging down there, but you’ve got to wait in line—I don’t know—for an hour to be able to get your cellphone plugged in, you know? Besides that, I don’t know what they’re doing. You know? I’ve seen some cleanup. There was definitely a lot of the boardwalk that’s been moved. But, you know, nothing that I would—I’m sure is happening on Wall Street or cleanup that’s happening in other parts of Manhattan, you know?

MIKE BURKE: Speaking of Wall Street, what is the connection with Occupy Wall Street and this relief effort?

CATHERINE YEAGER: Sandy Relief—basically, you know, Occupy Wall Street were one of the main people who started immediately knowing that Rockaway was the one that was the hardest hit. I was contacted pretty much immediately from friends of mine who are in Occupy Wall Street, like Bobby and Olivia Katz, you know, who contacted me and were reaching out and saying, “We want to bring Occupy down there. We want to help with the relief effort,” you know? And it’s—they’ve been the only ones that I—that have really helped, you know what I mean? And really been able to make real, tangible things that are going on right now.

We’ve been open since 8:00 this morning. We have been giving things away all day long. People are walking away with smiles on their faces. People are able to, you know, for one night be able to not be in a totally dark room, because they’ve gotten flashlights. You know, they have warm clothes for their children. They have clean diapers, you know. They’re going to actually be able to eat tonight.

MIKE BURKE: Amy, that was Catherine Yeager. I spoke to her in the Rockaways on Friday outside Veggie Island, which had been transformed into this really impressive relief hub. While we were there, there were several cars that came by. They were able to ask for specific items, and then volunteers would search the building. In one case, someone asked for baby food, which is something that FEMA and the National Guard did not have down the street. And they had a box of baby food. They were able to run it out to the car and give it to them, and they drove off with the baby food. It’s interesting. There was an article in Slate yesterday titled “Is Occupy Wall Street Outperforming the Red Cross in Hurricane Relief?”

AMY GOODMAN: Well, that’s an interesting question. We’re going to go to break, and when we come back, we’re going to Staten Island, where the Staten Island borough president has said, stop supporting the Red Cross. Stay with us. 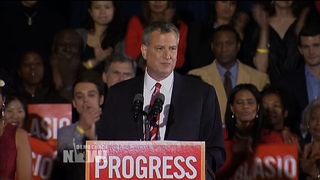 “We Are Living in the World Occupy Made”: New York City Voters Elect Mayor Who Vows to Tax the Rich