We spoke Sunday with supporters and critics of the European Union across Oslo as it was set to receive the 2012 Nobel Peace Prize. “When we heard that the Nobel Prize for peace will be given to the European Union, we first thought it was a joke,” says Greek lawmaker Dimitris Kodelas of the left-wing opposition group Syriza, “especially because this comes in days when mainly the peoples of South Europe are living with the results of a financial war, and their countries are turning to colonies of debt with deprived citizens and looted national wealth.” Kodelas spoke to Democracy Now! at the Oslo Peace House. [includes rush transcript]

AMY GOODMAN: Yes, the European Union has won the Nobel Peace Prize. On Sunday, Democracy Now! talked to supporters and critics of the European Union across the capital of Oslo. We stopped at the Nobel Institute, the Oslo Peace House, the Grand Hotel where the banquet will be today, as well as the streets of Oslo. This is Greek lawmaker Dimitris Kodelas of the left-wing opposition, Syriza, speaking at the Peace House on Sunday.

DIMITRIS KODELAS: When we heard that the Nobel Prize for peace will be given to the European Union, we first thought it was a joke, especially because this comes in days when mainly the peoples of South Europe are living with the results of a financial war, and their countries are turning to colonies of debt with deprived citizens and looted national wealth. For example, in my country, the decision of the last three years will be over 30 percent in 2013. The unemployment rate is now 26 percent, reaching 58 percent for the youth. One-third of the society in Greece is below or at the edge of poverty. Is it ever possible that the initiators of this situation are given awards?

Mrs. Merkel is going to receive the prize. Instead of peace prize, she should be awarded the prize of neoliberal fundamentalism. Mr. Samaras, the prime minister of Greece, should take the prize of the best student of Mrs. Merkel. And in reality, if a prize should be given to someone, these are the struggling peoples in South Europe, in North Africa and in the Middle East, who are fighting for peace, dignity, justice, democracy and independence.

AMY GOODMAN: That was Dimitris Kodelas, Syriza member of the Greek parliament, the leading left party in Greece, fiercely anti-austerity, that came in a close second in the last election in Greece. Across town, a very different news conference.

MARTIN SCHULZ: The European Union is a fascinating project, binding states and nations together in common institutions.

JOSÉ MANUEL BARROSO: Being here to jointly receive this award on behalf of the European Union is an honor and a humbling experience.

THORBJØRN JAGLAND: The European Union has been a continued peace congress. The disputes and dramas have never led to war. On the contrary, they have led to compromises.

AMY GOODMAN: I’m Amy Goodman. We’re here in Oslo, Norway, on the day before the Nobel Peace Prize is awarded of 2012. I’m standing in front of a statue of the bust of Alfred Nobel. A news conference was just held with the leaders of the European Union and the head of the Nobel Committee. No question was asked—and they took almost no questions from women, only the first—about the issue of militarization of the European countries, the European Union.

GEIR LUNDESTAD: Most of you will not be able to ask your questions. I think the final question will go to the gentleman in the back. Yes, you have waited the longest.

AMY GOODMAN: My question to them would have been: As the streets are about to fill with protests, no question was asked about the peace protests about to take place in the streets of Oslo, as many gather from around the world, questioning, criticizing the awarding of the Nobel Peace Prize to the European Union. The issues being raised, that the European Union’s reliance on arms exports—European Union member states account for a third of the world’s total arms exports.

Afterwards, I put that question to Martin Schulz, president of the European Parliament, one of those receiving the Nobel Peace Prize on behalf of the European Union. I caught up with him at the Grand Hotel, where today’s Nobel banquet will be held. I asked if the EU’s reliance on arms exports makes it a far greater force for war than for peace.

AMY GOODMAN: But they say the member states, at the—if you add them up, the weapons sold around the European member states add up to something like the second-largest arms exporter in the world.

AMY GOODMAN: What are they doing to fight that militarization?

MARTIN SCHULZ: The European Union, as a whole is—I repeat it—a soft power. We try to influence the worldwide development without weapons, with more development, with more support for international economic cooperation. The European Union is the biggest donor of aid and solidarity in the world. So my answer is quite clear: The Union is on a better way than some of the member states of the Union.

AMY GOODMAN: Last question: Syriza was there, one of the parties—

AMY GOODMAN: —one of the parties in Greece. In the press releases that they issued, they said the European Union austerity policies, which even the IMF is balking at, are causing mass unemployment; suicide is going up; permanent economic decline in these countries. Your response to that?

MARTIN SCHULZ: I think partially they are right. The exclusively the austerity policy is wrong. We need budgetary discipline, but we need also investment in growth and employment. And that was what is—was what was lacking in the European Union during in the last years. Since the June summit of the member states, we decided for the first time a rescue package, package of investments. But Greece was also stabilized with a lot of money from other European countries. It is not true that it is only the European Union imposing burdens. My country, for example, decided to give 40 billion euros of the 130-billion-strong package to rescue Greece. And it was not paid to torture the country; it was paid to save the country. But I repeat, in one point, they are right, with the critics: Only to cut leads to nothing. We need budgetary discipline, on one hand, and investment in growth and especially in employment, on the other side.

AMY GOODMAN: Martin Schulz, European Parliament president, speaking on Sunday. I put the European Union’s defense on the issue of militarism to one of the leaders of the protest movement, Hedda Langemyr, head of the Norway Peace Council, at the activists’ news conference on Sunday.

If you could talk further about how you feel the European Union is militarizing the world—I think in one of your press releases it says EU member states have provided weapons sales—third-largest amount of weapons sales in the world, but the EU isn’t responsible for each of their member states.

HEDDA LANGEMYR: Well, the EU is a consolidation of strong powers and strong national powers. And it’s more difficult to divide between the member state actions and the EU as an institutional force. But I think both in our press releases and also in our presentations today, we’ve made it very clear that it is not only the member states that do export weapons, and it’s not only the one—member states facilitating the weapon industry, but it’s also EU on an institutional level. And that is the main reason, at least I’m here today, to contradict this prize.

AMY GOODMAN: That’s Hedda Langemyr, head of the Norwegian Peace Council. After break, I sit down with her to talk about the protest she was about to head out to. And as we stand here today, on International Human Rights Day, just behind me, at Oslo City Hall, the ceremony has just ended. People are pouring out of the building. They will soon head off to the Nobel Peace Prize banquet at Grand Hotel. This is Democracy Now! Back in a moment. 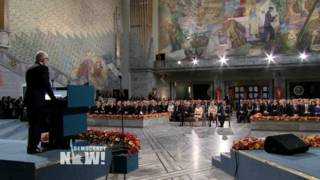