We broadcast from Oslo, Norway, just outside Oslo City Hall, as the European Union receives the 2012 Nobel Peace Prize. Norwegian peace organizations and opponents of the European Union held a torch-lit march Sunday to protest the decision. Three Nobel Peace Prize laureates — Archbishop Desmond Tutu, Mairead Maguire of Northern Ireland and Adolfo Pérez Esquivel from Argentina — sent an unprecedented letter to the Nobel Committee opposing the award, saying the 27-nation bloc contradicts Alfred Nobel’s vision of a demilitarized global peace order. We begin the show going inside the Nobel Peace Prize awards ceremony. “We are not gathered here today in the belief that the European Union is perfect,” says Thorbjørn Jagland, chairperson of the Norwegian Nobel Committee. “We are gathered in the belief that here in Europe we must solve our problems together.” The committee said it chose to honor the European Union because of its contributions to decades of stability and democracy after World War II. [includes rush transcript]

AMY GOODMAN: We are broadcasting in the freezing cold from Oslo, Norway, just outside Oslo City Hall, where the 27-member European Union is being awarded this year’s Nobel Peace Prize. In October, the Nobel Committee said, quote, “The stabilizing part played by the EU has helped to transform most of Europe from a continent of war to a continent of peace.” However, on Sunday, Norwegian peace organizations and opponents of the European Union held a torch-lit march to protest the decision. Three Nobel Peace Prize laureates—Archbishop Desmond Tutu, Mairead Maguire of Northern Ireland and Adolfo Pérez Esquivel from Argentina—recently sent an unprecedented letter to the Nobel Committee opposing the award, saying the European Union contradicts Alfred Nobel’s vision of a demilitarized global peace order.

We begin today’s broadcast going live inside the Nobel Peace Prize award ceremony just behind me in Oslo City Hall.

THORBJØRN JAGLAND: The prize is going to an organization of which one cannot become a member without first having adapted their legislation to the Universal Declaration of Human Rights and the European Convention on Human Rights. But human rights, as such, are not enough. We can see this now that country after country is going—undergoing serious social unrest because misplaced policies, corruption and tax evasion have led to money being poured into gaping black holes.

This leads, understandably, to protests. Demonstrations are part of democracy. But the task of politics is to transform the protesters and the protests into concrete political action. The way out of the difficulties is not to dismantle the European institutions. We need to maintain solidarity across borders, as the Union is doing by canceling debts and adopting other concrete support measures, and by formulating the framework for a finance industry on which we all depend. Unfaithful servants must be removed. These are preconditions for the continuing belief of the European masses in the compromises and moderation which the Union is now demanding of them.

Your Majesties, Your Royal Highnesses, heads of state and governments, presidents of the European Union, ladies and gentlemen, Jean Monnet said that “nothing can be achieved without human beings, but nothing becomes permanent without institutions.” We are not gathered here today in the belief that the European Union is perfect. We are gathered in the belief that here in Europe we must solve our problems together. For that purpose, we need institutions that can make the necessary compromises. We need institutions to ensure that both nation states and individuals exercise self-control and moderation. In a world with so many dangers, compromise, self-control and moderation are the principal needs of the 21st century. And that is why we need institutions, to achieve exactly that—and rule of law, human rights and democracy.

Eighty million soldiers had to pay the price with their own lives for the opposite: the exercise of extremism in Europe. So, together, we must ensure that we do not lose what we have built on the ruins of the two world wars. What this continent has achieved is truly fantastic, from being a continent of war to becoming a continent of peace. In this process, the European Union has figured most prominently; it therefore deserves the Nobel Peace Prize.

AMY GOODMAN: That was Nobel Committee Chair Thorbjørn Jagland, speaking just a few minutes ago inside Oslo City Hall, which is just behind me here in Norway. It’s about 21 degrees Fahrenheit right now. 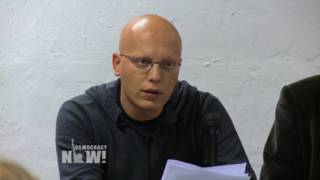